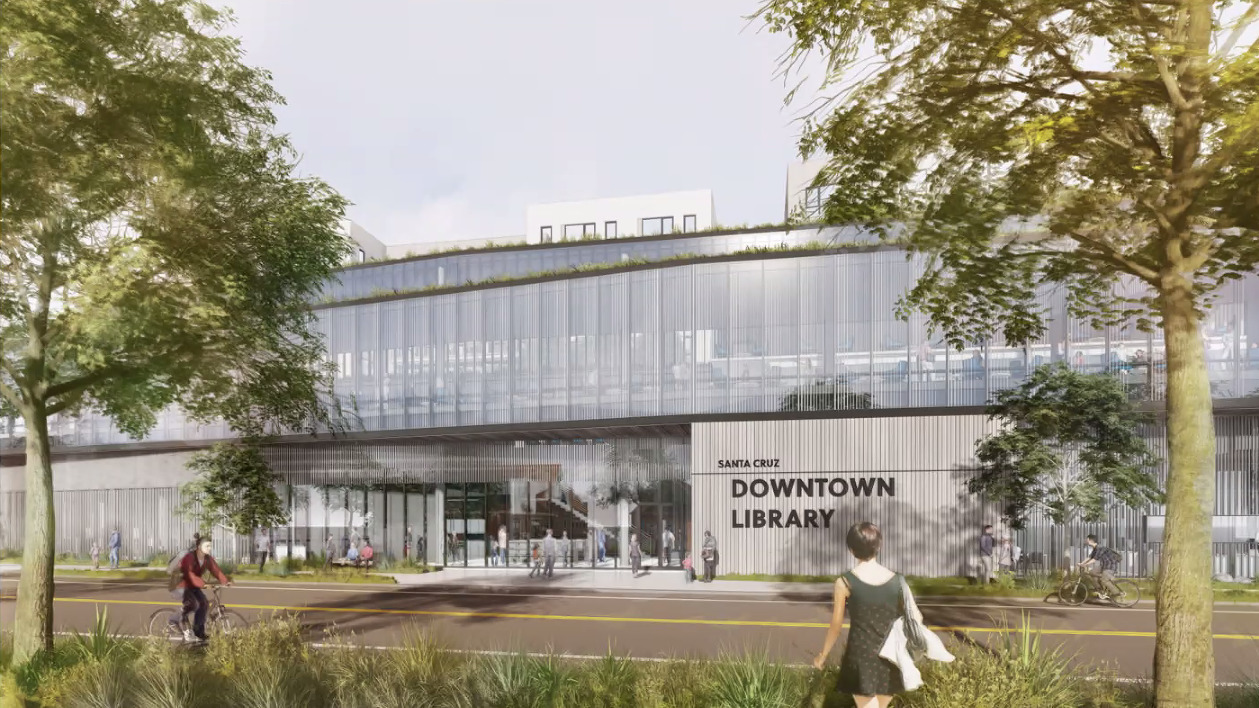 In December, the council approved a conceptual design for the new library and housing complex with:

Lipscomb said that city staff recently met with leaders of the Santa Cruz Community Farmers’ Markets about a possible interim location for the downtown farmers market. Discussions have focused on a city-owned parking lot at the northwest corner of Front and Cathcart streets. That location is not final, Lipscomb said.

The farmers market could eventually be relocated to the site of the current library at 224 Church St. In June, the council discussed a possible vision for the future of the downtown library site, which included:

Construction of the new library is expected to start by summer 2023 and take 18 to 24 months, Lipscomb said. It is expected to open in late 2025 or early 2026. Construction at the existing library site could begin after that move.

City leaders have applied for a $10 million state grant to help fund the new library construction. Cost estimates are preliminary, but in December, the estimate was $104 million to $107 million. That cost estimate includes the library, housing and garage.

More renderings and funding details are expected at the city council’s April 26 meeting. A full application with detailed plans is expected to be submitted to the city planning department by late May. 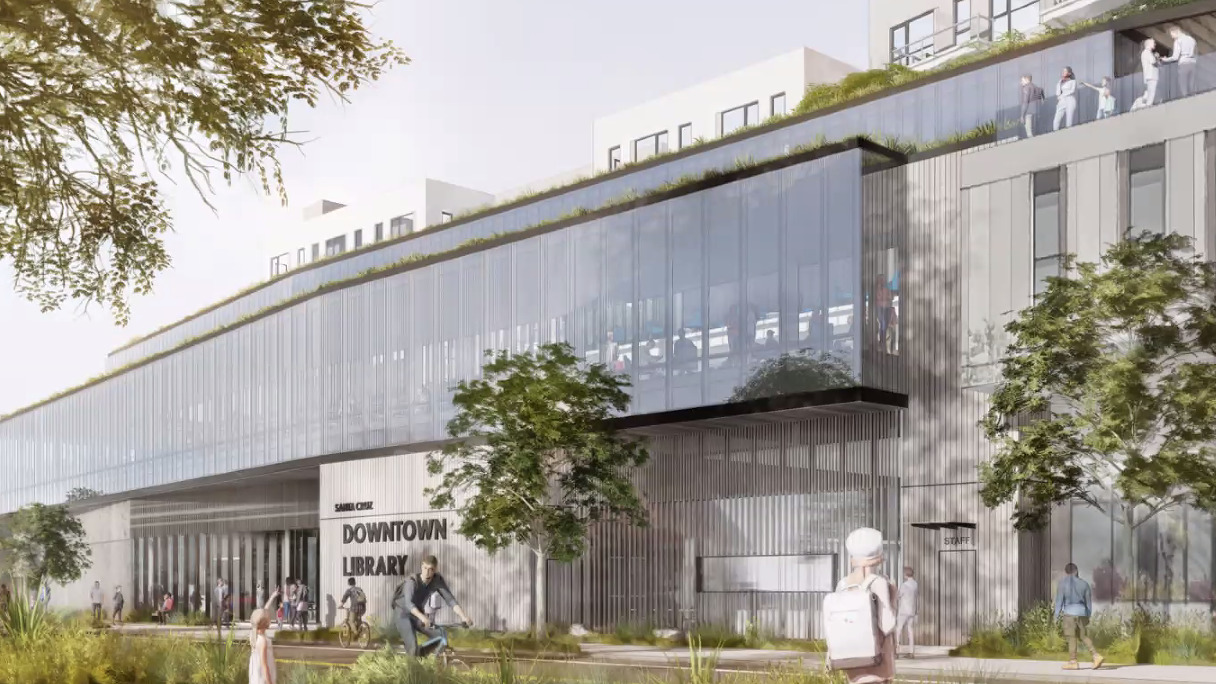 Another draft rendering of the Cedar Street entrance of the planned Downtown Santa Cruz library shows housing above and behind the rooftop garden. (Jayson Architecture)

The flexible density units may contain some larger apartments. The more flexible requirements are supposed to make developers more likely to take on the projects, staff said.

Many residents who spoke at the meeting opposed the change because of potentially taller buildings. The new rules will not lead to more density, city staff said.

Councilmember Sandy Brown opposed the measure, saying that although it would lead to more housing being built, more market-rate units would raise the city’s median income and ultimately harm low-income renters.

Brown proposed that 25% of units in “flexible density unit” projects be affordable, an increase from the city-wide mandate of 20%. Santa Cruz Planning Director Lee Butler cautioned that requirements of too many units for low-income renters or owners may make projects unprofitable for developers. “We don’t want to set the bar so high that nothing gets built,” he said.

“If we want to grow sustainably, let’s be proactive and not get our hand slapped by the state,” said Kalantari-Johnson. “Let’s not have high rises all over town. And I think the way that we do that is we get in front of it.”

Of 3,407 Santa Cruz County applications for a state rent assistance program, 1,465 households have received money, according to a state dashboard on Tuesday March 22.

Instead, the city is supporting tenant resources for legal support, mediation and housing assistance. The city currently financially supports projects including;

City staff will continue working with the county to find more funding for rental assistance, mediation, and other tenant resources.

Santa Cruz Local recently compiled a list of rent assistance programs in Santa Cruz County with details on eligibility and how to apply.

Beach Street in Santa Cruz in May 2020. On weekends, Beach Street’s sidewalk can get crowded with tourists and vendors. (Kara Meyberg Guzman — Santa Cruz Local file)

In a 4-3 vote Tuesday, the council approved a new permit system for vendors on sidewalks and beaches.

The move comes after two years of unrestricted public vending that followed a 2018 state law that prohibited cities from arresting unpermitted vendors.

Last year, the city tried a lottery system to allow six vendors to operate near Cowell Beach, said Santa Cruz Parks and Recreation Director Tony Elliot. But the permitted vendors were crowded out by “upwards of 50” unpermitted sellers, Elliott said. The unrestricted vending has led to dangerously crowded sidewalks, and a “completely unmanageable” amount of beach trash, Elliot said.

The new program will receive $205,110 from the General Fund for the current fiscal year. For the fiscal year that starts July 1, the program will need an estimated $370,000, staff said.

City on track for housing goals

Though the city has met almost all of the state-mandated housing targets for 2023, the next set of targets may be challenging, city staff said. State requirements for the number of homes built in Santa Cruz and Monterey counties are expected to more than triple.

But as the state mandates more development, keeping up with housing targets will grow increasingly difficult, city staff said. An early draft from the Association of Monterey Bay Area Governments estimates that the city will need to permit about 3,700 more units from June 30, 2023 through Dec. 15, 2031, including about 850 “very low income” units. Draft goals for housing production for the City of Santa Cruz and other local jurisdictions are expected next month.

The numbers are so high, “We may need to rezone properties,” said Donovan.

City staff are developing a plan to build the necessary housing during the next nine years, which they plan to submit to the state in December.

Editor’s note: This story has been update to clarify what the cost estimate for the downtown library project includes.