SANTA CRUZ >> In two years, Santa Cruz’s downtown area may extend from Pacific Avenue to the Depot Park roundabout and east to the San Lorenzo River levee — a change that would allow more housing in that neighborhood.

The Santa Cruz City Council plans to study a possible expansion to areas governed by the Downtown Plan. The plan is a land use document that sets standards for height and building space on a lot.

Draft goals of the expansion include:

Tuesday, the Santa Cruz City Council unanimously agreed with a motion from Councilmember Martine Watkins to set a “preliminary boundary that could be refined later” around the neighborhood that includes the Kaiser Permanente Arena on Front Street. The area also includes a lot on Center Street where a six-story housing complex has been proposed. 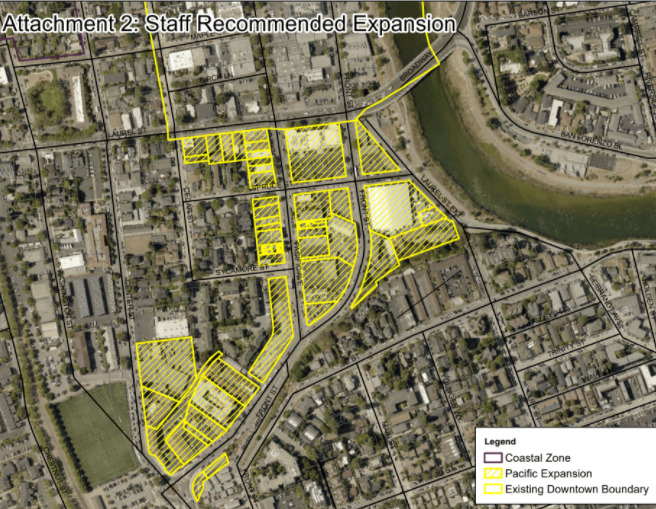 The Santa Cruz City Council on Tuesday unanimously approved “preliminary boundaries that could be refined later” to expand the downtown to include areas south of Laurel Street. The move allows city staff to search for a consultant, city leaders said. (City of Santa Cruz)

City staff recommended to have the council set the preliminary boundary rather than allow a community outreach process to set the boundary, to “shave approximately three months off the beginning phases of the project,” according to the report. The council agreed.

Several residents wrote to the council and spoke Tuesday to urge for public input about areas to include in the Downtown Plan expansion. “I could picture a wonderful connection from the town to the beach, if it’s done right. But I do think the public needs to weigh in early,” resident Judi Grunstra said on Tuesday. “Otherwise it could be a disaster. You should’ve learned by now that the public wants to weigh in and it’s not a good idea to cut corners at the start of a process.”

City staff and council members said that residents will have a chance to get involved and the preliminary boundaries were just a first step to issue a request for proposals for consultant services.

Cummings initially expressed concern that the city planning commission has not been consulted. The council decided that the issue will be discussed by the planning commission on April 1. Residents will be able to weigh in then, as well as in a deeper survey and listening process that will be led by a consultant, city staff said.

The council is expected to publicly discuss potential expansion of the Downtown Plan several times before October 2023, the projected end date of the grant-funded project. The expansion would require a change to the General Plan, zoning and Local Coastal Program. Staff expect the change to require environmental review, a process that takes about a year.

Listen to Santa Cruz Local’s podcast about the history and original purpose of the Downtown Plan.

The arena is home to the Santa Cruz Warriors basketball team. The G League squad affiliated with the Golden State Warriors has played at the arena since 2012. The arena agreements expire in September 2022.

The arena was intended to be temporary. For years, city leaders have discussed the construction of a permanent arena, possibly on the same site. Other cities have tried to recruit the Warriors, though the Warriors have expressed a “strong desire” to remain in Santa Cruz, according to a city staff report.

City leaders are in talks with Santa Cruz Warriors leaders about a potential construction of a new arena, possibly on the site of the Kaiser Permanente Arena on Front Street. (Kara Meyberg Guzman — Santa Cruz Local file)

Chris Murphy, president of the Santa Cruz Warriors, said during public comment Tuesday that he expects an arena redevelopment to be primarily privately-funded. The new arena would host “basketball, music, arts, entertainment, other community-benefitting events,” Murphy said. “We look forward to sharing ideas and collaborating with the community, once we fully know what the possibilities are for the site.”

“We want to stay in Santa Cruz. We just need to move with some clear momentum forward, toward a long-term arena solution,” Murphy said.

City staff are preparing for the relocation of a camp of unhoused people at Highways 1 and 9.

City staff are working with Caltrans, which owns the land along the highway shoulders where many dozens of people have pitched tents. The camp is unmanaged except for city-funded trash pickup. City staff has not heard whether Caltrans will help cover those costs.

Community Development and Homelessness Response Director Lee Butler gave an update to the council on Tuesday, and the council took no action. “The Caltrans crew recognizes the safety hazards that are present in that area and they are taking the lead in the approach to making sure everyone can be moved out of that dangerous location,” Butler said.

City staff have previously said that the camp must be relocated to allow for an intersection widening project that is years in the making. Construction is set to begin in spring on the widening of the intersection of Highways 1 and 9. A $2.8 million grant for the project is set to expire if the city does not begin construction in the next few months. The project would add four lanes to one of the city’s busiest intersections.

Separately, homeless people at that camp have begun to receive COVID-19 vaccinations, Butler said. Vice Mayor Sonja Brunner, who serves on a county-city commission on homelessness, said 150 vaccine doses will be available to people at that camp.

Read or listen to Santa Cruz Local’s previous stories on the construction project:

Tuesday, the council heard an update on plans to issue permits and guidelines for sidewalk vendors on Beach Street. Sidewalk vending is prohibited by an executive order by the council, due to the ongoing COVID emergency.

The order has drawn protests from some who say it discriminates against the sidewalk vendors who sell food on Beach Street. Most of those vendors are Latino.

Some business owners on Beach Street called for greater control of sidewalk vending as store sales suffered, especially during the pandemic. A state law, SB 946, prevents cities from considering competition with storefronts as a factor in regulations for sidewalk vending.

The city staff plans to place permitted sidewalk vendor locations on the public deck behind Ideal Bar and Grill. However, staff recently discovered that the city has a 25-year agreement with Ideal about use of the deck, said Ralph Dimarucut, Santa Cruz principal management analyst.

Ideal contributed funds toward the construction of the public deck, and the city agreed to not issue any business permits or licenses on the deck. State law SB 946 allows the city to override that agreement, Dimarucut said. City staff are working with Ideal staff to find a compromise, Dimarucut said.

The city’s inclusionary housing law sets a minimum percentage of affordable housing units that market-rate developers are required to build in new projects. The city’s law requires that market-rate developers make at least 20% of new units available at affordable rates to people with lower incomes. Santa Cruz’s rule is one of the highest affordability requirements in the region.

Tuesday, the city council unanimously approved more flexible requirements for employer-sponsored rental housing. These are projects in which the employer owns the land and at least 75% of the housing units are rented by employees.

The rules also called out flexibility for rental housing sponsored by school districts. These are projects in which a school district owns the land and districts would be allowed to restrict occupancy to district employees. The majority of units must be for low- and moderate-income households.

Santa Cruz City Schools leaders plan to build rental homes for teachers in the Natural Bridges neighborhood. In late 2019, when the council discussed raising the inclusionary rate from 15% to 20%, school leaders expressed concern about the feasibility of their housing project with the new rule.

Many local teachers’ salaries do not qualify for affordable housing, but are not enough to afford market-rate housing or rentals, city staff said.

Retention has been an issue due to high housing prices, school leaders have said. A lack of housing availability and high cost of living also have impacted employee recruiting and retention across other industries in the county, a 2019 Beacon Economics State of the Workforce Report showed.

Workforce housing incentivizes employers and school districts to charge rents that retain employees, rather than the highest amount that the market will bear, city staff said.