SANTA CRUZ >> A Santa Cruz City Council committee’s proposal for a city sales tax increase failed to advance Tuesday. The proposal will die unless the council can approve it in a special meeting before an Aug. 6 deadline.

In an eleven-hour meeting Tuesday, the council also advanced a regional bike share program, heard updates on the downtown library site’s future, agreed to revisit services and limits for overnight RV parking, and approved a contractor to oversee a study of downtown expansion.

A city council committee of Mayor Donna Meyers, Vice Mayor Sonja Brunner and Councilmember Justin Cummings proposed a 0.5% sales tax increase that would bring Santa Cruz’s sales tax to the county’s sales tax cap of 9.75%. The proposal would have allowed city voters to consider the tax in the Nov. 2 election or in a special election tied to the California governor’s recall.

California counties have a minimum 7.25% sales tax. City and county voters can choose to increase that rate to each county’s cap. Counties’ sales tax caps range from 7.25% to 10.5%.

The proposal required a unanimous vote to declare a fiscal emergency for the city, according to state law. The proposal was halted by a no vote from Councilmember Sandy Brown. Meyers, Brunner, Cummings and Councilmembers Martine Watkins, Renee Golder and Shebreh Kalantari-Johnson voted in favor. 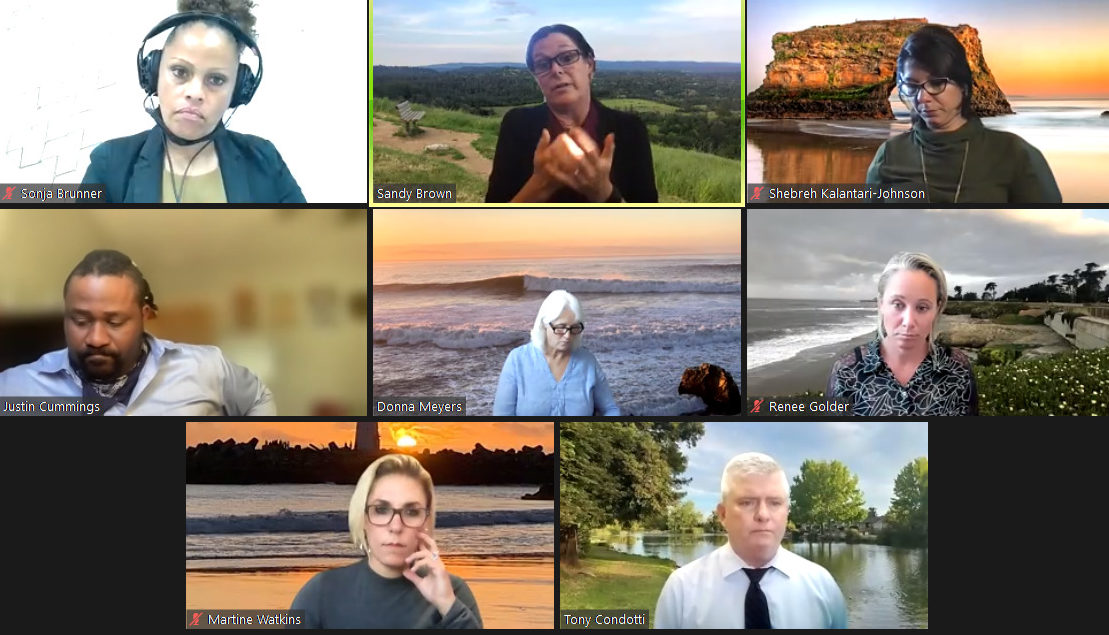 Brown said she could not support the ballot measure without the council’s commitment to address the city’s litter and trash management problems and higher pay for the lowest-paid city employees. An informal committee of Brown, Golder and Brunner will discuss a living wage for city employees during the council’s July recess. If they can agree on a recommendation, then the mayor may call a special meeting before an Aug. 6 deadline to get the measure on the ballot.

Mayor Meyers said she was disappointed by Brown’s stand.

“The voters are the ones that are losing out on this,” Meyers said. “You’re removing their ability to make a choice on investing in their community, even more than they’re already doing.”

Why raise the sales tax?

For the next 10 years, Santa Cruz leaders forecast $1 million to $5 million annual deficits, according to the 2021-22 budget. The proposed sales tax increase would bring an estimated $6 million a year to the city’s General Fund, city leaders said.

The city’s financial problems predate the pandemic. Santa Cruz, like other cities across the state, has struggled to pay for rising pension costs. “The growth in pension costs is a significant factor contributing to future deficits,” Santa Cruz Finance Director Kim Krause wrote this month in an email to Santa Cruz Local.

The committee’s reasons for the tax hike proposal, according to the draft resolution, include:

In fall 2019, prior to the pandemic, the council discussed the placement of a hotel tax increase on the November 2020 ballot. It did not move forward. A council committee has continued to study the issue.

That law does not apply to city employees. At least five city jobs pay less than that living wage, including parking facilities maintenance assistants ($17.63 per hour), some administrative assistants ($17.31 per hour) and custodians ($17.04 per hour), according to data from the Service Employees International Union Local 521 union that represents those workers. Parking facilities maintenance assistants clean the city’s downtown parking lots and garages and collect trash on Pacific Avenue.

Union representatives have held individual meetings with council members recently to lobby for higher pay for these and other city jobs. An SEIU bargaining unit that represents low-paid seasonal workers also is in negotiation with city leaders for a new contract, said Ken Bare, a city parking control maintenance worker and SEIU chapter president for City of Santa Cruz workers.

In an interview, Bare said that he has seen issues with recruitment and retention for parking facilities maintenance assistants. Colleagues have left for nearby agencies, he said.

“We’re essentially becoming a training field for everybody else,” Bare said. “It’s really important that we pay the workers of Santa Cruz a living wage — something that we’re offering others who work for the city through subcontractors — if for nothing else, just to show them that they matter as far as workers go.”

Councilmember Brown, who advocated for the city’s living wage law in the late 1990s and early 2000s, said Tuesday that she was frustrated that some city employees still do not earn a living wage.

Brown said she was “dismayed” that she has not been able to advance that goal and needed to use her “no” vote to ensure a council commitment. Several controversial council decisions this year have ended in a 5-2 vote, with Brown and Cummings in the minority.

“I am using the tools available to me, and I have very few, to make the case that low-wage workers need to be prioritized. And I can’t support a fiscal emergency that may result in money that is not going to those really critical needs,” Brown said. “I’m sorry if folks feel insulted that there’s not trust. It has nothing to do with any one individual council member. It has to do with what I have seen as a systemic lack of interest in supporting our lowest-paid workers.”

According to state law, income from the proposed sales tax increase as conceived could not be designated for a specific purpose. It would go to the city’s General Fund, and the city council could change how the proceeds are used.

Tuesday, the council voted unanimously to revisit the city’s 2015 overnight RV parking ban to align it with the city’s new homeless camp limits.

The overhaul would create safe parking programs and establish “time, place, and manner of use of RVs for daytime and nighttime camping,” according to a motion by Vice Mayor Sonja Brunner.

“A lot of folks can’t afford to live in homes and the question is, ‘What is the alternative?’” Commissioner Effie Turnbull-Sanders asked at the time. “Do we want people to be pushed out of RVs and would you rather have people living on the streets?”

Santa Cruz Director of Planning, Community Development and Homelessness Lee Butler said Tuesday that the law would serve as a starting point but would need analysis given recent legal precedent.

This month, the council adopted a new law that limits where and when homeless people can camp in the city. The new law can be enforced only after a storage center is opened and 150 new safe sleeping spaces are established.

If city-sanctioned or private shelter beds are available, camping essentially would not be allowed on public property unless city leaders give permission for that site. The law aims to deter large, unmanaged homeless camps.

The council is expected to discuss changes to the RV parking law in October.

Editor’s note: This story has been updated. A previous version misstated the year the Santa Cruz City Council adopted an overnight parking ban. 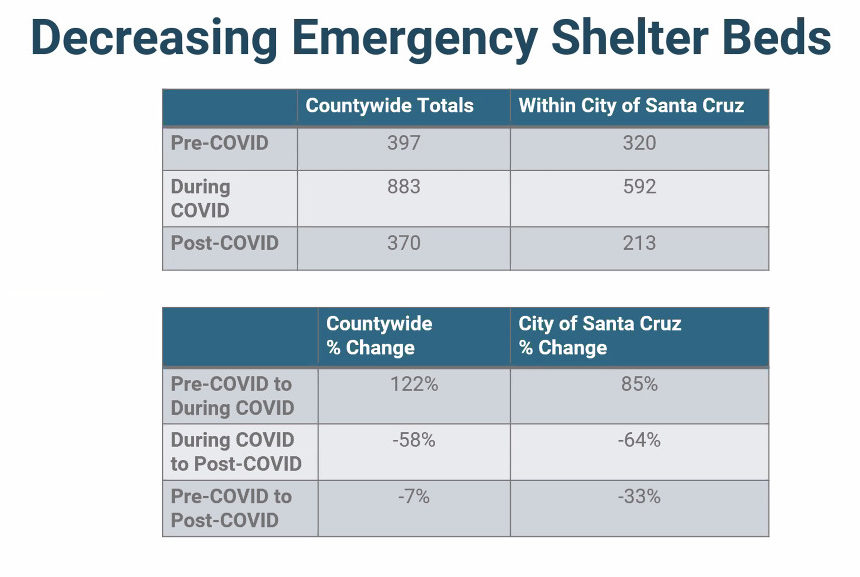 Tuesday, the city council unanimously advanced a joint request for vendor proposals. Other local jurisdictions are scheduled to consider the same request in the next few weeks.

The system would be funded by the vendor without taxpayer dollars, according to Tuesday’s Santa Cruz city staff agenda report. If the project advances, city leaders are expected to approve public locations for bike share stations this fall. The project could start in early 2022.

The proposed program would likely reactivate many of the same bike docking stations as well as add new ones, said Claire Gallogly, Santa Cruz transportation planner.

Local leaders involved in the project have discussed shared revenue earned from the program. Gallogly said Tuesday that she’s concerned any local fees might be passed on to customers. She would rather see vendors commit to low-income passes, helmet giveaways and other public benefits.

“So that balance of finding a vendor who is financially sustainable, who has a revenue model that will pencil out over the long term and be a good partner while not having user fees that are so high that it disincentivizes ridership is one of the things that we will be looking at,” Gallogly said.

City staff have led two workshops, met with neighboring businesses and distributed surveys in recent months to get public input. Potential options for the site include affordable housing, a community commons and other public uses. The council did not vote on the issue Tuesday.

Based on public feedback, the consultants recommended: 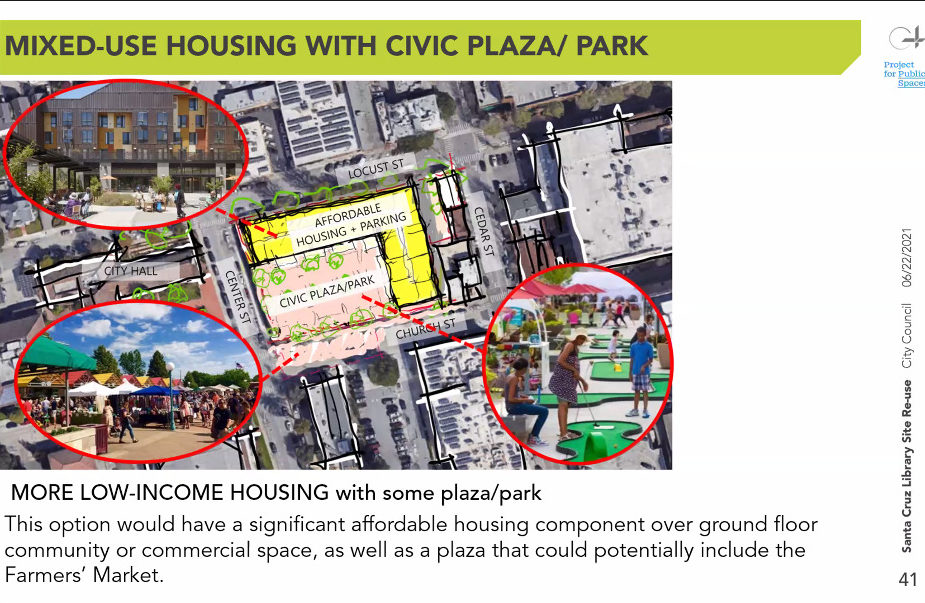 Based on public feedback, consultants recommend affordable housing, a civic plaza or park and other public uses for the site at 224 Church St. in Santa Cruz. (Source: Group4 Architecture)

Analysis of these uses and a parking study are needed, the consultants said. Ongoing community engagement is also expected.

Last year, the council approved the construction of a new downtown library with a parking garage and affordable housing at Cedar and Lincoln streets. The library is expected to stay in its existing location for at least another three years, staff said.

City leaders plan to study a possible expansion of the city’s downtown area to allow more housing. The change would also allow a new Santa Cruz Warriors arena at its current location. Downtown could expand from Pacific Avenue to the Depot Park roundabout and east to the San Lorenzo River levee. 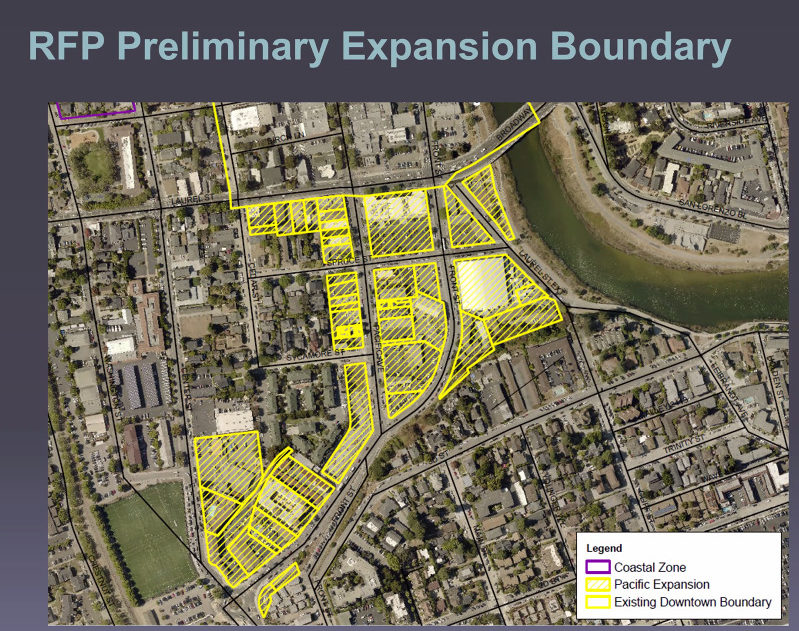 Brown and Cummings wanted more involvement of the city’s Planning Commission early in the process.

Residents will have several opportunities to get involved, city staff said.

The work program calls for: