Under the new rules:

At previous meetings, some residents have argued against administrative approval and in favor of automatic public hearings.

Staff presented three alternatives for the approval of design permits of residential and mixed-use projects in commercial or mixed-use zones:

Santa Cruz Senior Planner Sarah Neuse urged the council to approve the first option to incentivize developers to fully conform with the city’s standards, rather than propose plans that vary from the standards.

In response to community concerns about the transparency of development decisions, the council voted 5-2 to adopt the third, hybrid option.

“I would have even voted for the streamlined option one, because I really feel that would have given the most local control,” said Santa Cruz Mayor Sonja Brunner. “It’s very clear that our community wants more control, and this is the way to get there.”

Councilmembers Justin Cummings and Sandy Brown voted against the hybrid option. Cummings said he supported public hearings for all developments. “The developers are the ones who are looking for a fast approval process, not the community,” he said. “If we want to have more transparency, we really need to make sure that that option is available to people.”

As part of the new rules, developers of residential projects with 20 or more units that are within a half-mile of a “high-quality” bus stop will be required to provide free bus passes for all residents. High quality bus stops are defined by the frequency of bus service. 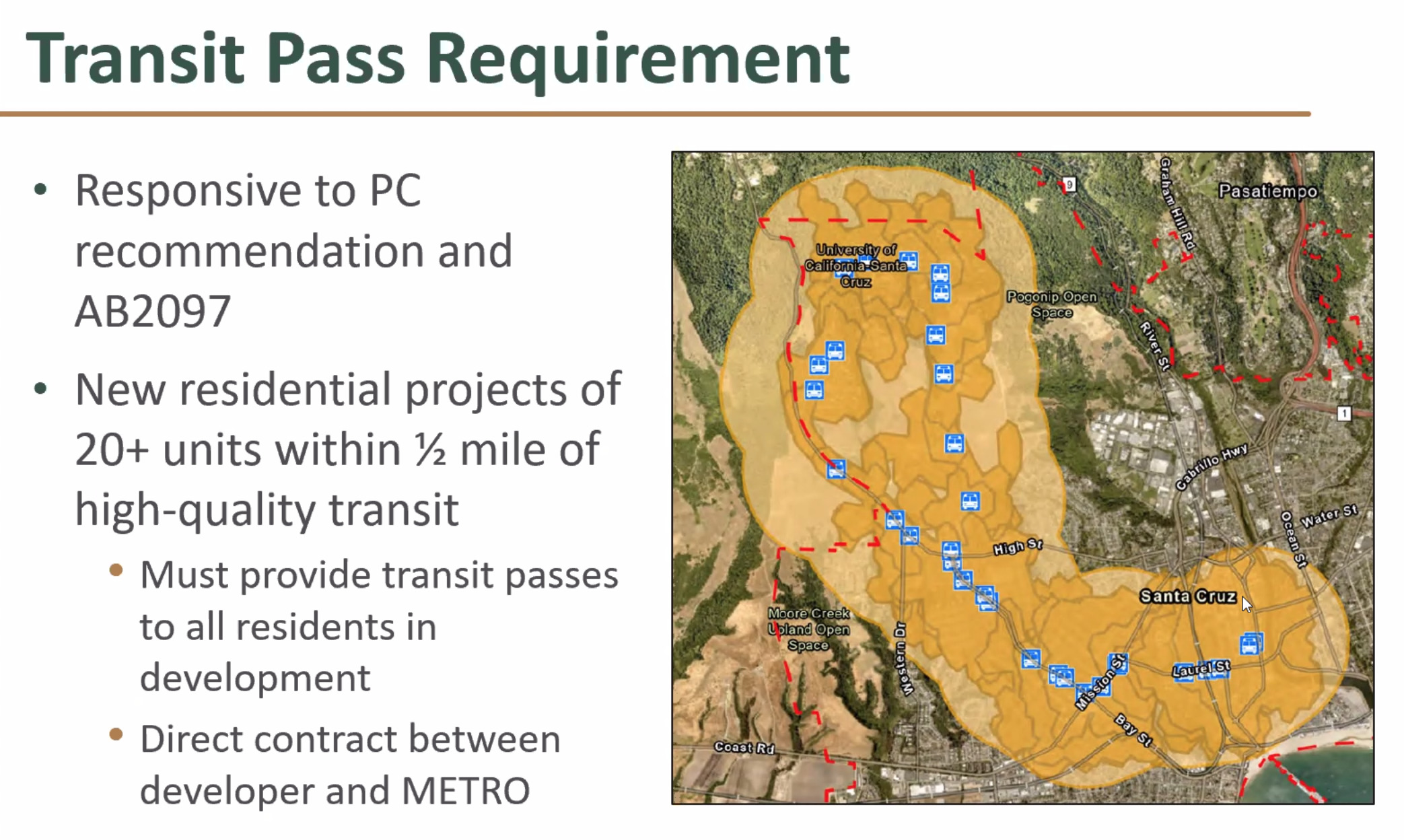 A city map shows some areas within a half-mile of a high-quality bus stop. In these areas, developers of housing projects with 20 or more units will be required to provide all residents with free METRO passes. (City of Santa Cruz)

Based on current bus routes, the rule will apply to the upper Westside and most of Downtown. Developers will be required to negotiate a contract with Santa Cruz Metro for the passes.

The requirement is spurred both by a recommendation from the Planning Commission and by a recently-passed state law, AB 2097, that prohibits cities from imposing parking requirements on residential developments of 20 or more units within a half-mile of public transit.

The council also voted to exempt four parcels near May Avenue and Leonard Street from planned changes to the zoning code. City staff wanted to match local zoning to the higher density allowed by the city’s General Plan.

California law states that if a city’s General Plan and its zoning laws do not align, the rules that allow greater density apply.

For four parcels on Leonard Street, the changes would make the residential neighborhood open to commercial and mixed-use development, including hotels and motels.

Resident Kevin Stierhoff said that when the General Plan was adopted in 2012, the neighborhood wasn’t aware of the plan’s potential impacts. “The changes were subtle and obscure enough that even our most involved and diligent neighbors are not aware that the land use designation on these parcels had been changed,” he said. “If they had, they would have tried to address this sooner.”

If the city doesn’t permit the housing density allowed in the General Plan on Leonard Street, it must find another place in the city to permit an equal amount of housing. Councilmember Donna Meyers said staff should try to use the Ocean Street Plan, the Housing Element update, and the downtown expansion plan to reallocate the housing density. After meeting with some residents in the neighborhood and consulting with staff, Meyers said she believes the designation of the neighborhood for mixed-use and commercial development was “a mistake.”

The council voted unanimously to:

The council voted 5-2 to introduce ordinances that will:

The second reading and adoption of these ordinances will take place at the next city council meeting. The city will begin to implement the new rules in January 2023.

Cummings and Brown opposed the new rules. Cummings presented an alternate proposal that would have:

Cummings said the staff’s recommendations did not adequately address the city’s need for more affordable housing. “We provide direction and sometimes the city staff acts on it, and sometimes they don’t. And that’s why many people have had issues with trusting our city government,” Cummings said at Tuesday’s meeting.

Councilmember Meyers echoed previous reports from city consultants that a higher inclusionary requirement could slow housing development in the city, including development of affordable units.

“Ratcheting up our inclusionary [requirement] is not necessarily going to result in any additional affordable housing,” Meyers said.

The alternate proposal failed with a 2-5 vote and Brown and Cummings in the minority.