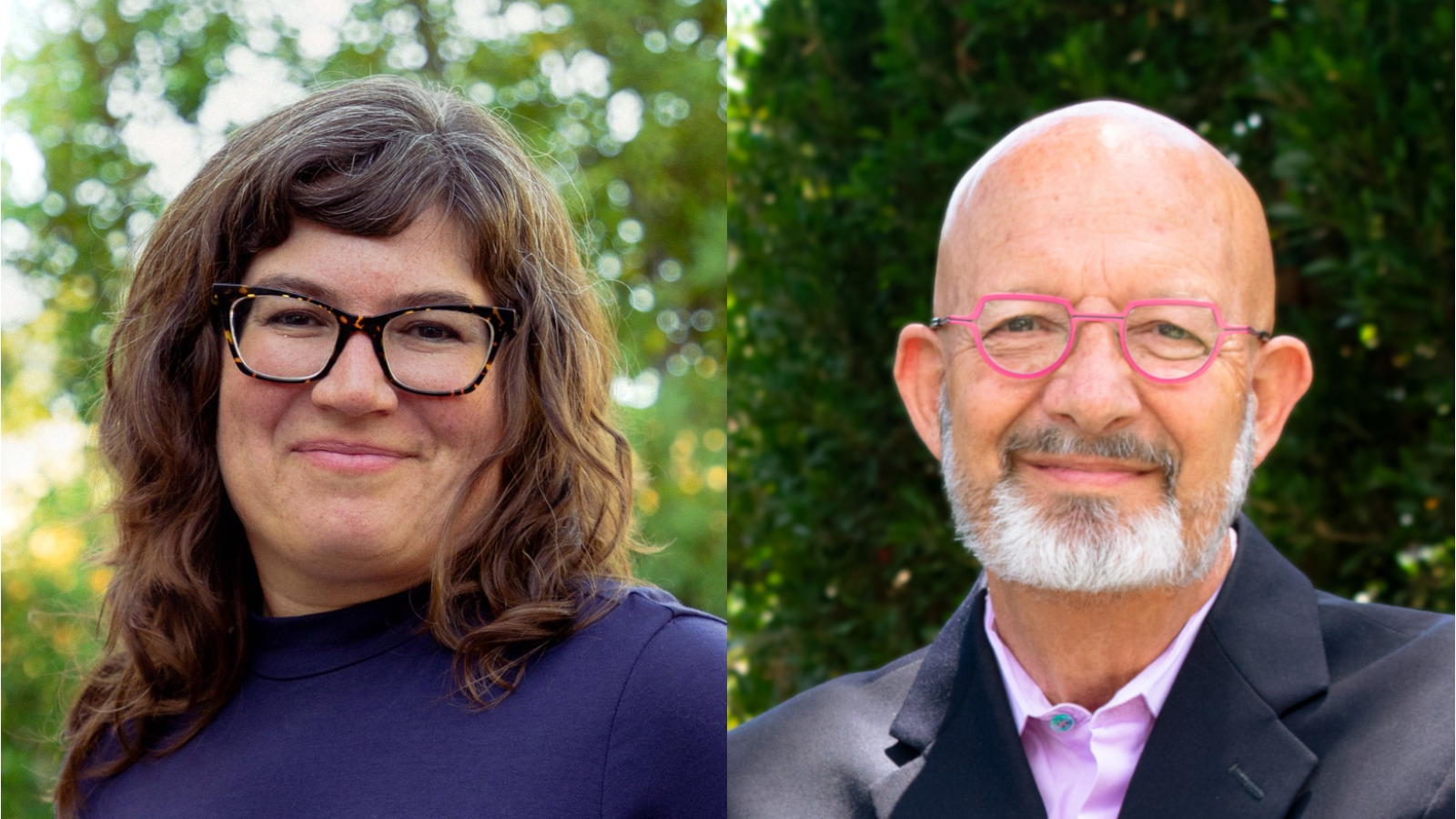 Get informed on the Nov. 8 local election

Election Day is Tuesday, Nov. 8. For the first time, Santa Cruz voters will choose a mayor. We meet the two candidates: Joy Schendledecker and Fred Keeley.

We explain the new format for Santa Cruz City Council elections and the new mayoral role. Then we press the candidates on the issues important to Santa Cruz residents.

In today’s episode we’ll meet two candidates for Santa Cruz mayor. If you live in the City of Santa Cruz, you’ll see them on the Nov. 8 ballot.

This seat is new. Santa Cruz now has district elections for city council. That means the city is divided into six geographical districts. Voters from each district choose a representative from their district. For the first time, voters across the city will also choose a mayor who represents the whole city.

The big change is that the mayor is now chosen by the voters, not the council. And the mayor now serves four years instead of one. The mayor’s power stays pretty much the same.

According to the new law, the mayor has the “primary but not exclusive” responsibility to interpret policies, programs and needs of city government. The city attorney has told us that the mayor’s new role is not an expansion of the mayor’s powers. The salary also stays the same. It’s about $41,000 a year.

Like before, the mayor will have one of seven seats on the city council. The council creates the city’s laws. They decide how the city spends taxpayer money. They also oversee the city’s functions, like the police department and the water department.

Joy Schendledecker is 47. She lives on the Westside. She has worked as a community organizer for 20 years. She used to live in London. She served on a board of governors at a primary school there. That was for two years.

Here’s why Joy Schendledecker is running for mayor.

JOY SCHENDLEDECKER: Well, there are quite a few issues, I think, the most pressing and the most informed by that community organizing has been my work with people who live outside, and my relationships with people who are precariously housed. So seeing firsthand, getting to know people personally, what they’re dealing with the contributors to their houselessness, which are primarily economic. And the fact that once somebody, generally through no fault of their own, becomes unhoused, that they end up deeper and deeper into a hole that’s more and more difficult to get out of. And then when we enact new laws, new ordinances that are particular to people that don’t have housing, I see firsthand how, how terribly negatively impactful those can be, including putting people’s lives at risk. And so that would be the most immediate thing that spurred me into getting more directly involved.

KMG: Fred Keeley is 72. He lives in Midtown. He is a professor at the Panetta Institute. He also has held several roles in government. He was a Santa Cruz County supervisor, Santa Cruz County treasurer, a California state assembly member and the assembly’s speaker pro tempore.

Here’s why Fred Keeley is running for Santa Cruz mayor.

FRED KEELEY: I think there are two things that are important with regard to the first directly elected mayor of Santa Cruz and 75 years and that is that I think it will be quite helpful as we move from all elected officials in the city being at large to having six district council members and one mayor elected citywide. The reason I think it’s important to have someone with experience, which I do have, is that we will live in a twilight world for a couple of years. We’ll have part of the council elected by districts, part of them elected at large, then in two years, everyone will be elected by district.

And I think as time moves on, we’re going to need to have someone in place as the first four-year mayor who can help guide and mentor and help the new city council get its tasks performed.

And that then leads to what are the top issues in town. I don’t think there’s much debate about what they are. I think it is how we address homelessness, which we have not done enough effectively on that. “Very low” and “low income” housing. Drought-proofing our water system. Drought-proofing our water system is a subset of a larger issue about climate change and how we adapt to that change as time moves on.

These are four issues which cannot wait for two years or four years or six years, while people get up to speed. And I think that with my background and experience and the neighborhood politicians that are going to be elected to city council, we can work collaboratively very well to address these issues.

The top themes we heard were:

Let’s hear what the candidates said about affordable housing. It was the top theme that we heard from residents.

State rules require Santa Cruz city leaders to issue permits for more than 3,700 homes in the next 10 years. More than 2,100 of those homes are required to be affordable for people with “very low”, “low” and “moderate” incomes. Do you support housing above shops on Soquel Avenue, Mission Street and Ocean Street? How and where should the city add homes?

JOY SCHENDLEDECKER: I think that we need to be adding housing in all of our neighborhoods, I think that the building on transit corridors makes sense in a lot of ways. Because then people are, I mean, it’s nice. I’ve lived in, in several large cities. And it’s, it’s nice to be able to walk downstairs and get a newspaper and you know, your half and half for your coffee, or toilet paper or whatever. You don’t have to get into a car at all. And there’s public transportation there, and you can get where you need to go. So we also, we need choices for people.

I also think that there’s a problem with market rate, mixed-use buildings with commercial spaces where the rents may not support local businesses and community projects. So that’s something that as a community, I think we need to think about is protecting our, our local enterprises and community spaces, like the Diversity Center or the Hub for Sustainable Living, or other nonprofits, art and dance spaces — spaces that provide public good that we can’t simply just let to the marketplace.

So I will say in a qualified way. Yes, I think that we should develop our corridors. That makes sense to me. These are our commercial hearts of our neighborhoods. And it makes sense to me that there’s some increased density there and that there’s housing there and more public transportation, more commerce. Also, we need to think about equity and environment and livability and health.

KMG: Here’s Fred Keeley. Same question. Do you support housing above shops on Soquel Avenue, Mission Street and Ocean Street? How and where should the city add homes?

FRED KEELEY: It’s very clear that, in order for the City of Santa Cruz to meet the state’s requirement for Regional Housing Needs Allocation, that the city has the greatest opportunity to do this in a new neighborhood, Downtown Santa Cruz.

I suspect that what we’re going to have in the City of Santa Cruz is as we go to these district elections, we’re going to hear district council members all say that they believe that the city needs to authorize more affordable housing being built. At the same time, we hear that many of those same people will think that most of that should not happen in their district, it should happen someplace else.

The new opportunity to build a new neighborhood south of Laurel (Street), as we head towards the beach — with something on the order of 1,000 (to) 1,200 new housing units with a significant portion of that being affordable — is going to make sense to a lot of people. Because that’s what we do in cities, is that we do the development in urban areas. The urban component is two or three blocks wide, from the top of Pacific Avenue to Beach Hill. That’s the urban part of Santa Cruz. And that’s where smart cities increase their density and develop, is within their urban area.

Now, as to development elsewhere — there was a proposal at one time called the Corridors Plan, which was to develop along Water (Street), Soquel (Avenue) and Mission Street, the various arterial streets in our community. There was a lot of public objection to that. I think that the way to keep faith with the voters is there will be some development, along Soquel (Avenue), along Water Street, along other places that are appropriate for development to take place. One of those is right next to where I live, at the corner of Market and Water (streets) in Santa Cruz. That’s a perfectly appropriate place to increase density and build new housing.

But by and large, I think that where we’ll see the political will to build housing — affordable housing, increasing density — is in a new neighborhood downtown.

KMG: Election Day is Tuesday, Nov. 8. If you’re registered to vote in Santa Cruz, you should have received your ballot by mail. If you need to register, or need to get a ballot, find details on Santa Cruz Local’s Election Guide. Our Election Guide also has much, much more about each candidate and the issues. Visit SantaCruzLocal.org/Vote. That link is in our show notes.

Santa Cruz Local does this work because we love Santa Cruz County. We want our Election Guide to be useful for you. We believe our local democracy works better when everyone is watching and involved, especially with elections.

I invite you to support Santa Cruz Local with a membership today. Go to SantaCruzLocal.org/Membership. The link is in our show notes.

A big thank you to our freelance reporter Grace Stetson. Grace interviewed the candidates for this episode.

Thanks to Trimpot for the music.