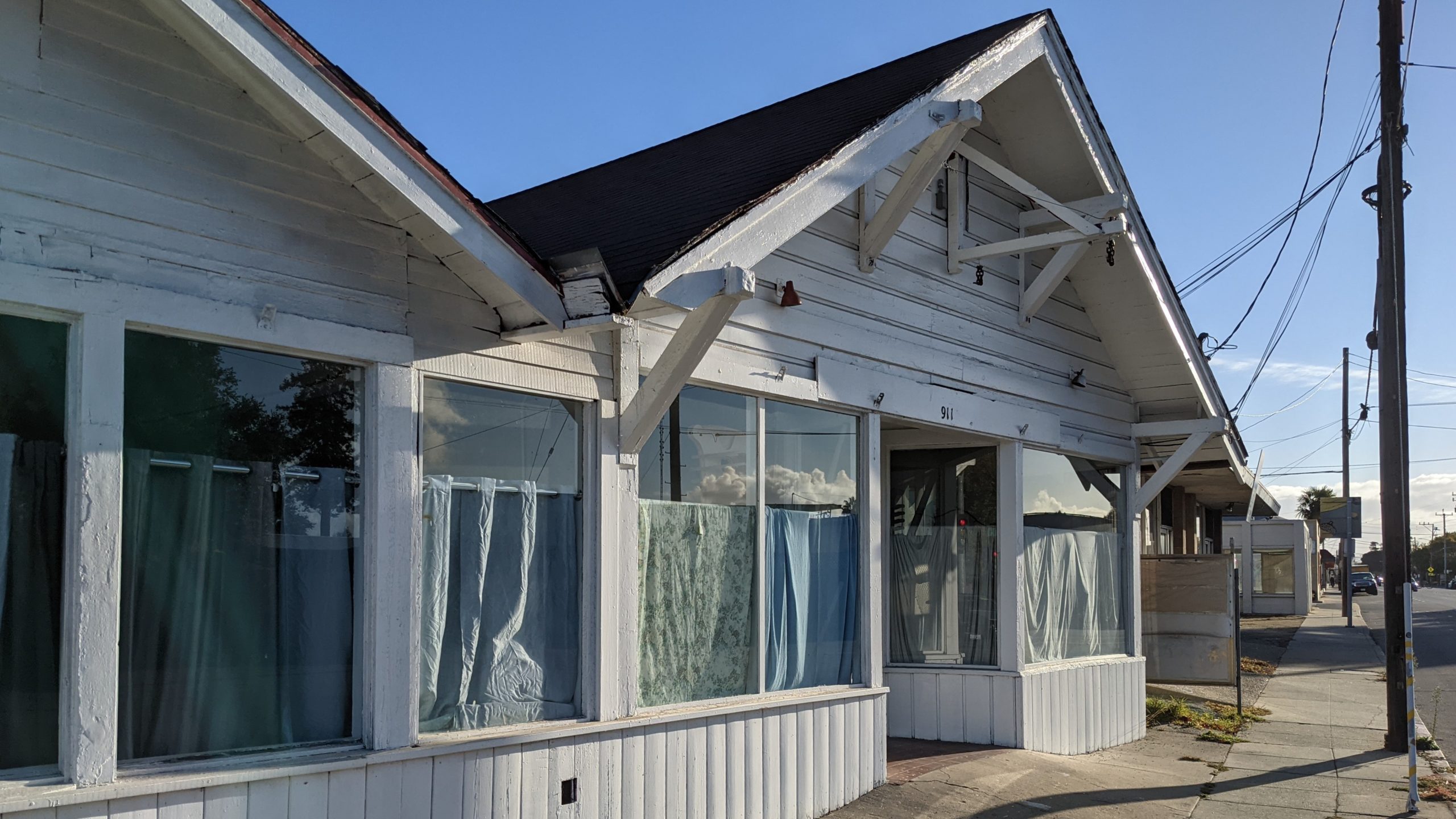 Proposed zoning changes could allow multi-story housing and shops at vacant commercial properties like this one on Water Street near Branciforte Avenue in Santa Cruz. (Stephen Baxter — Santa Cruz Local)

SANTA CRUZ >> To address Santa Cruz’s housing shortage and comply with state law, city staff on Tuesday night presented a plan to the city council that would allow more new homes above shops in busy areas like Soquel Avenue and Mission, Ocean and Water streets.

Also prompted by state law, city staff presented potential “objective design standards” that would apply to housing projects denser than a single-family home throughout the city. The standards address building materials, setbacks, floor ratios heights and other aspects of construction.

After several residents spoke against city staff’s plans with concerns about public input and consequences for new affordable housing, the city council voted to continue discussion at the next city council meeting Sept. 13.

California law states that if a city’s General Plan and its zoning laws do not align, the rules that allow greater density apply. In some parts of Santa Cruz, zoning laws currently allow less density than is allowed under the General Plan approved in 2012. 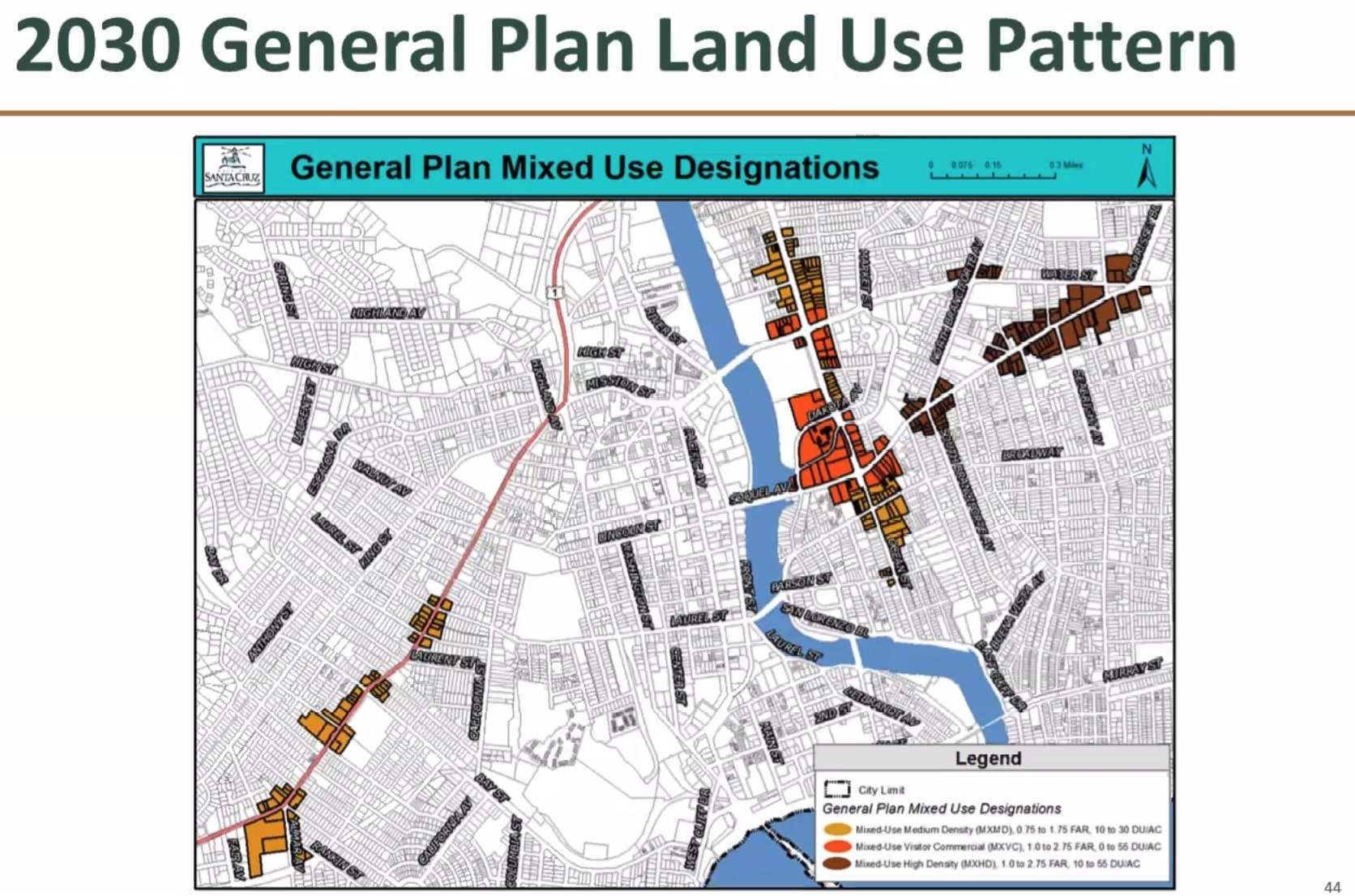 Parcels in yellow, orange and brown show areas where Santa Cruz’s zoning does not match the higher density called for in the city’s General Plan. Parcels in brown in Midtown have been the most controversial areas. (City of Santa Cruz)

The new zones would allow maximum heights of: 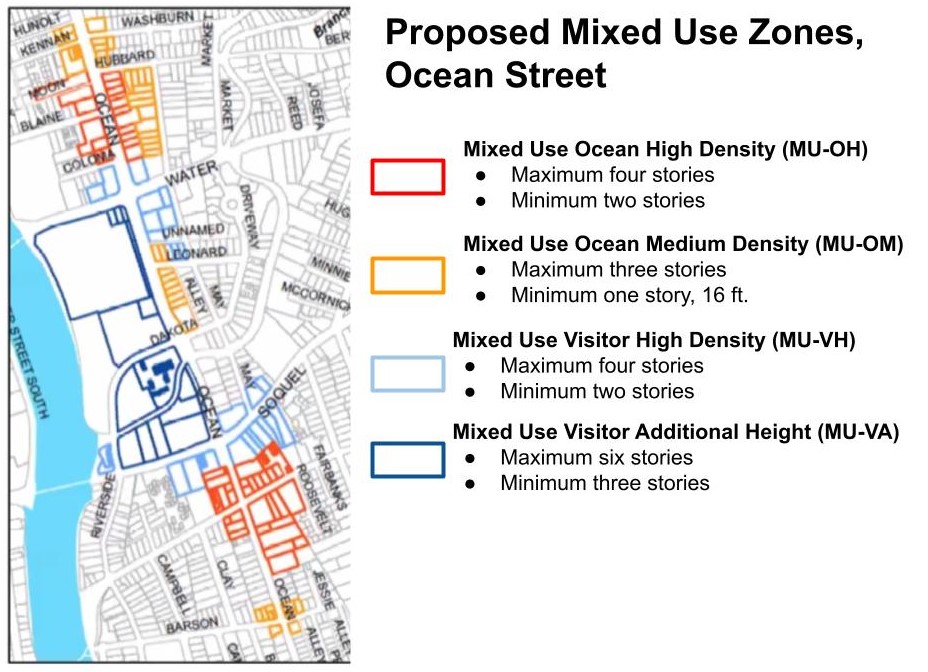 Planning director Lee Butler also emphasized that the rules “don’t allow any additional density” beyond what is already legally permissible under state law. For example, if a developer’s project was limited by zoning laws but allowed under the General Plan, the developer could sue the city to allow the project to be approved.

“A lot of our feedback from residents was about how neighborhoods in Santa Cruz are characterized by eclecticness, which makes it difficult to create a set of standards that really regulate the look and feel of buildings,” said Kristen Hall, a consultant with Urban Planning Partners who helped conduct community outreach. 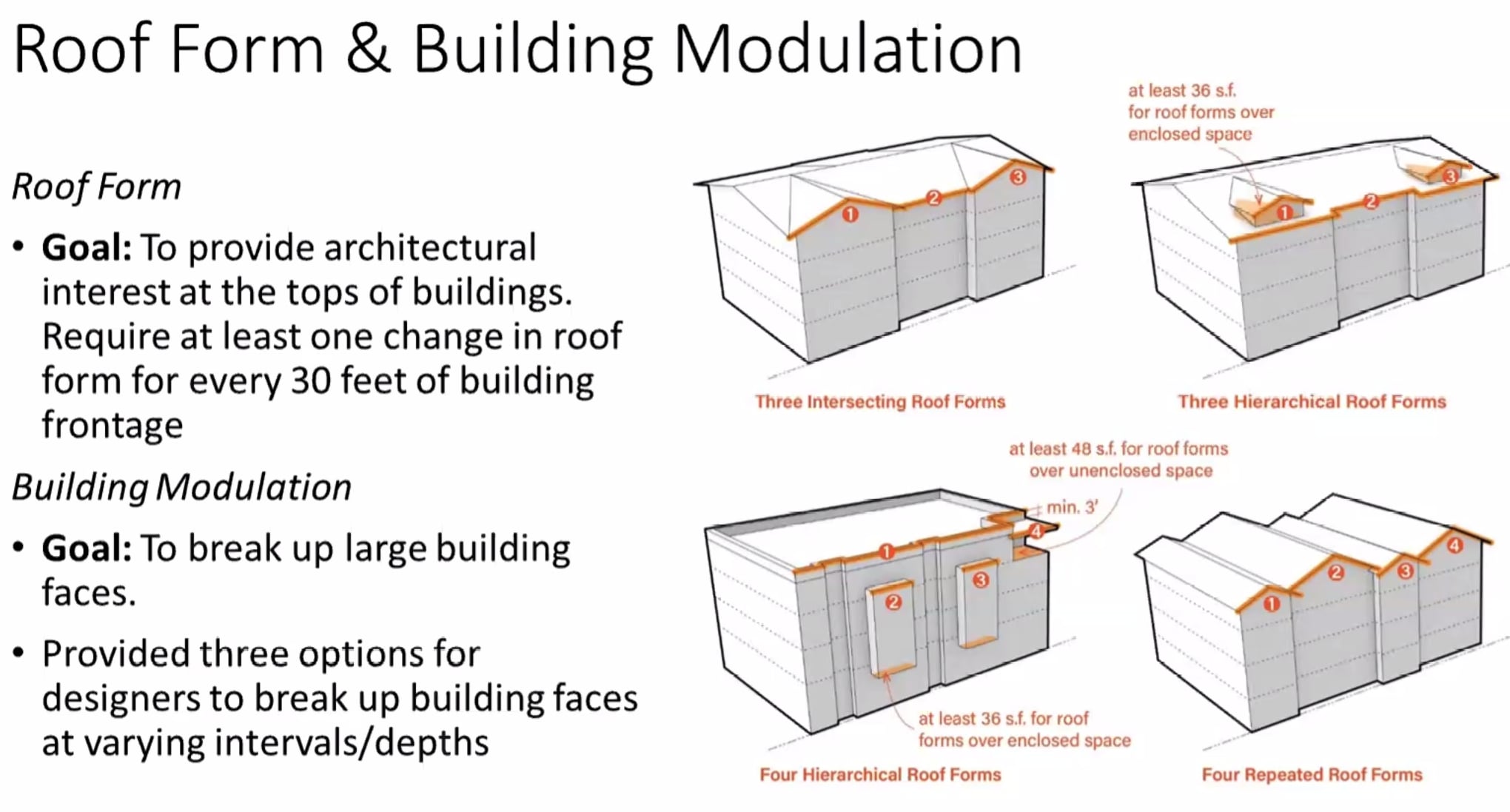 The proposed design standards for multi-family housing include requirements for the shape of roofs and building faces. (City of Santa Cruz Planning Department)

The standards list specific materials to use for buildings, and require that large projects use varied roof designs and “modulated” or varied street-facing walls to make tall buildings look less imposing.

When a new multi-family development is adjacent to an area zoned for single-family housing, the proposed standards would reduce the footprint of the new building’s upper floors to cast less shade on neighboring homes.

Other proposed standards include: 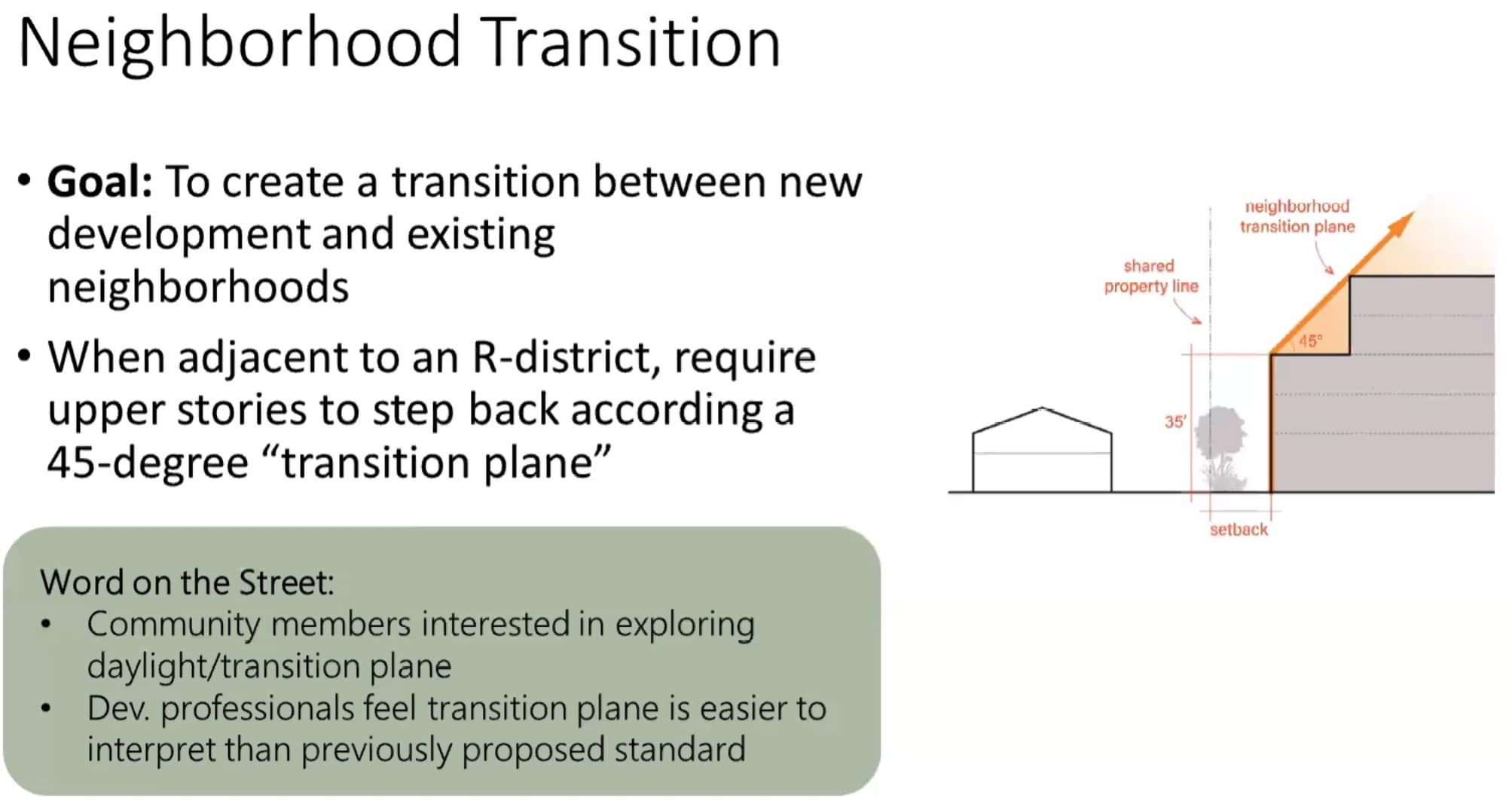 The new rules would also change how certain housing projects are approved. Currently, Multi-family rental projects in areas zoned for multi-family homes now get a streamlined approval process known as “administrative review.” City staff can directly approve those projects without a public hearing if the project fits zoning rules.

City staff proposed that streamlined approval for multi-family rentals to all areas of the city, including neighborhoods zoned for single-family homes. Projects would still need a public hearing if they do not fit zoning rules.

The state’s density bonus law allows developers to plan for more units, increased height and floor area than city zoning allows. In return, the developer must build more affordable housing for people with qualifying incomes. Projects that request a density bonus, as well as those that require a coastal permit or slope development permit, would require a public hearing.

“Most of our significant development projects that are coming in right now are seeking to vary from our zoning code in some way that is already triggering a public hearing,” said City of Santa Cruz Senior Planner Sarah Neuse.

SB 35 aims to incentivize housing development in cities which have not met state targets for low-income and moderate-income housing. Because Santa Cruz did not make enough progress on its Regional Housing Needs Assessment goals, the city council has limited power to change proposals that meet SB 35 requirements.

Requirements for streamlined approval in the City of Santa Cruz include:

Projects which meet SB 35 requirements are not required to undergo environmental review under the California Environmental Quality Act, or CEQA. The city council may only evaluate the project on objective standards.

Community members would still be able to submit an appeal to any development. Filing an appeal requires a fee.

The Santa Cruz Planning Commission, which reviewed the standards before the city council meeting, recommended that the council approve the standards developed by staff and  but also increase the city’s inclusionary ordinance to require more affordable housing.

In a report to the city council, city planning staff cautioned against the commission’s recommendation. Staff said the proposed increase could make large developments unprofitable and stall housing production.

“Should a higher inclusionary rate lead to a slowdown in housing production, it could lead to fewer affordable units being built than under the current inclusionary rate,” city staff wrote in the report.

More than 100 residents submitted emails that opposed the objective standards and new higher-density zones for different reasons. Some said the plans would create more market-rate housing and not enough deed-restricted affordable housing. Others said the plan didn’t offer residents enough input on new development if new construction were more streamlined.

Many said they agreed with a letter from community organization Save Santa Cruz. It said that the new rules about public hearings would “eliminate public hearings on many large and significant projects, stripping city residents of their right to comment and influence the development decisions that will have a profound impact on their lives.”

Several other residents supported the new standards and said the denser zones will help address the city’s housing crisis.

“I don’t want to hear people talk about, oh, I’m really worried about affordability, and then they say they’re worried about single-family homes,” said one supporter of the objective standards, who did not give a name. “I’d like for people to actually look at that and analyze, you know, are they really looking for affordability? Or are they trying to protect their single family home? There’s a big difference.”

Some people who emailed comments also objected to the proposed Mixed-Use High zone adjacent to areas zoned for single-family homes.

Gary Patton, co-chair of community organization Save Santa Cruz, said the appeals process would not be a substitute for community members who want to voice their concerns about development projects. “Appeals cost money,” said Patton. “There’s a real equity issue there.”

Several commenters said that without a higher inclusionary ordinance, the new development would be dominated by market-rate units unaffordable to many residents.

City resident Scott Graham compared the new zones to those proposed in the Corridor Plan. That plan was a previous attempt to align the zoning code with the General Plan that was scrapped after community backlash.

“It’s actually worse than the Corridor Plan,” Graham said at Tuesday’s meeting. “This plan makes it so that people who can barely afford to live here are going to end up having to move away, because this plan is going to build mostly market-rate housing.”

Bodie Shargel, a candidate for Santa Cruz City Council in District 4, said the development of market-rate housing could lead to displacement for long-time residents.

“Along with increasing the inclusionary requirements for these very large developments so that this neighborhood can remain affordable, I’d like to see the council exploring some possibilities to guarantee current residents of this area that they can remain in housing that is at or below 30% of their income after redevelopment,” he said.

In 2020, the council increased the city’s inclusionary rate to 20% from 15%. “At that stage, we as a builder and developer did not submit any applications,” Bristow said. “It wasn’t until the state density bonus increased from 35% to 50% that there was actually a financial incentive. So I just think that by trying to follow the Planning Commission’s recommendation, you’re gonna stall proposals in a negative way.”