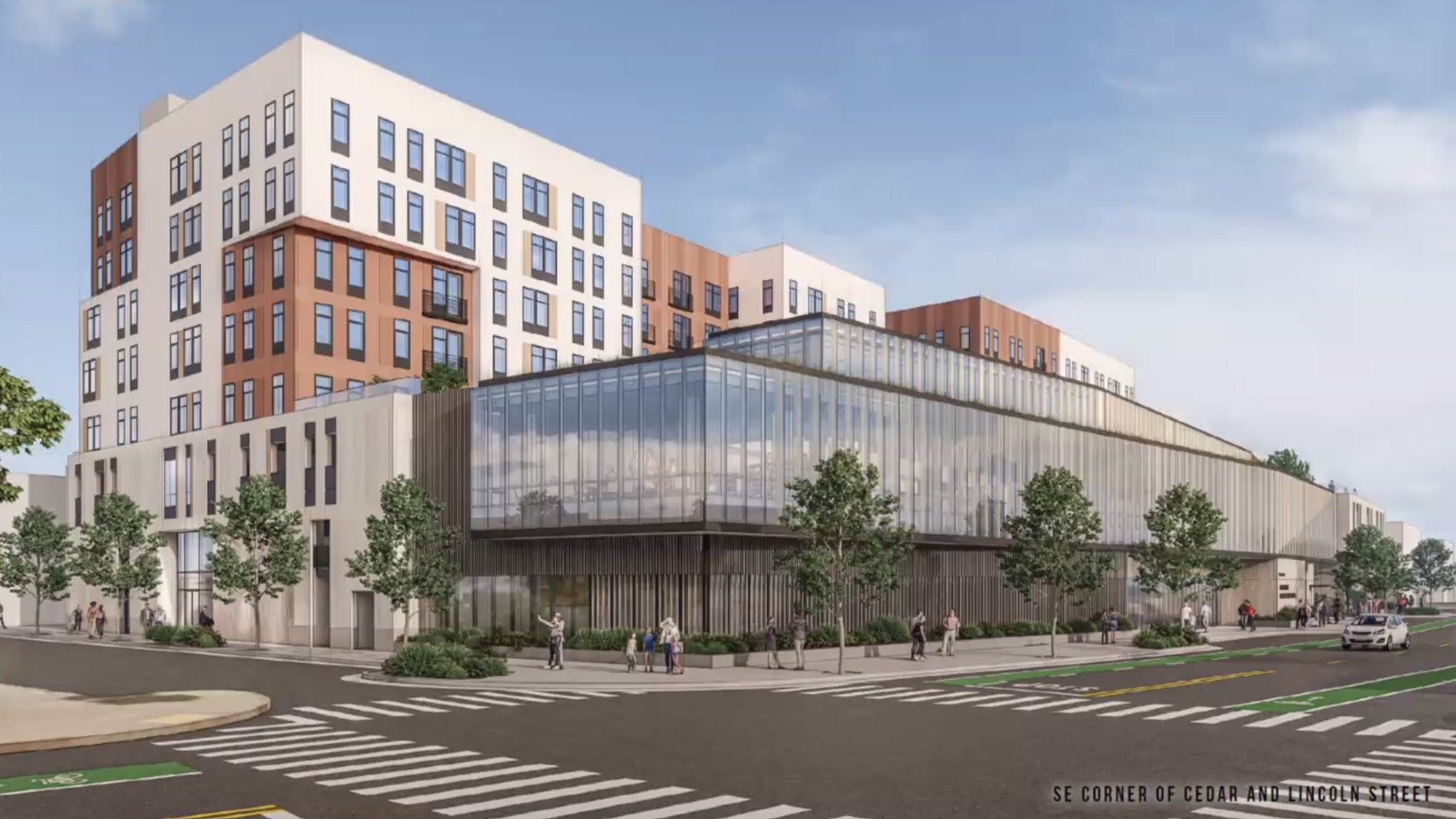 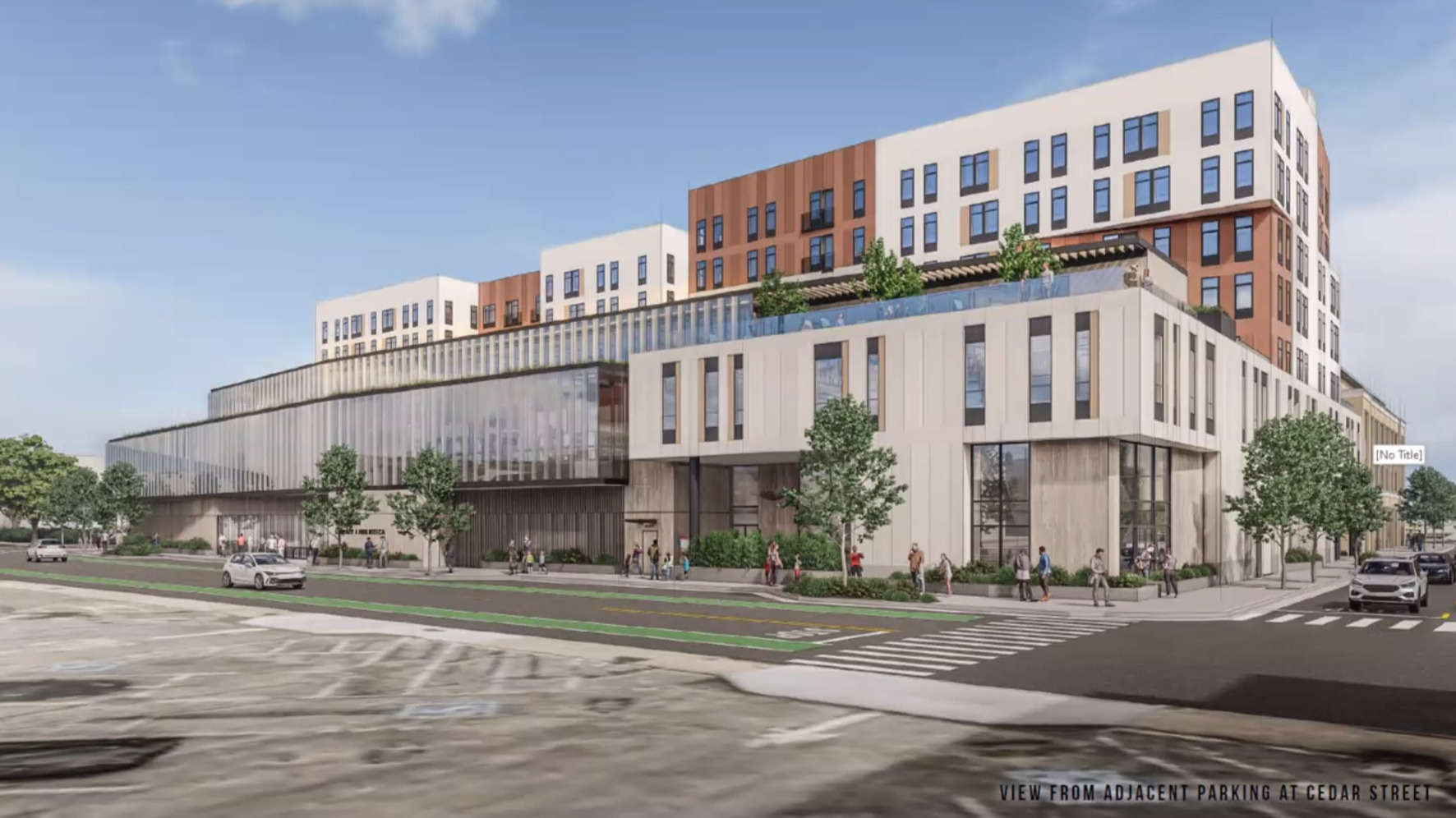 A project at Cedar and Cathcart streets is expected to include a new library, housing, a parking garage, shops and a childcare center. (Jayson Architecture)

“Extremely low income” units are difficult to include in other kinds of affordable housing, such as inclusionary units in large developments, Lipscomb said. “We’re going lower because those are the most expensive units to build,” she said.

The three-story parking lot with 243 spaces will cost an estimated $14.5 million, financed by parking district bonds or direct loans, Lipscomb said. The city will use the money earned by the parking garage, and the rest of the city’s parking district, to help repay the debt.

Councilmember Sandy Brown asked whether the parking district is in a financial position to finance the parking lot.

“As a whole, we do believe that we’re on solid ground when it comes to the parking district,” said City of Santa Cruz development manager Brian Borguno. “We’re kind of coming out of COVID and the revenues have rebounded.”

City staff are also working with the Santa Cruz Farmers Market to determine the future site of the weekly market.

The library’s most recent budget estimate is $42.7 million, down $625,000 from the previous estimate. A slightly shorter first floor brought costs down slightly, Lipscomb said.

The affordable housing component of the project has secured $7.39 million to date. The money includes:

Developers will be able to apply for the rest of the funding needed in January if the Santa Cruz City Council approves the final plans for the project in December. Those funds include $43 million in tax credits, $78 million in loans, and an undetermined amount in state and federal grants, Lipscomb said. Construction is slated for May 2024 to May 2026.

But that timeline could stop if voter initiative Measure O passes in November. The measure would require the city to renovate the existing library, rather than construct a new mixed-use building. It would also designate Lot 4 as the permanent home for the farmers market.

The Santa Cruz City Council on Tuesday approved a project to create an emergency connection between the city’s water supply and Scotts Valley Water District.

Plans for an intertie between the two systems have been in the works since 2012. Design work was abandoned in 2013 because of lack of funding, according to a city staff report. In March, the California Department of Water Resources awarded Scotts Valley Water District $9.4 million to complete the intertie.

Water sharing has been part of a regional push for drought resiliency. In 2016, the San Lorenzo Valley Water District completed an intertie with Scotts Valley Water District. The City of Santa Cruz has proposed updated water rights rules that would allow the city to share water with surrounding districts. Those rules await approval from the State Water Control Board.

The council unanimously approved the project as part of the consent agenda.

The Santa Cruz City Council on Tuesday directed its Health in All Policies Committee to study the possibility of banning single-use tobacco products.

The direction comes after activists urged the council in May to ban cigarette filters to prevent coastal pollution. Cigarette butts make up about a third of all pollution in California, according to the California Department of Public Health.

Nine stores in the city earn more than 50% of revenue from the sale of tobacco products, Leonard said.

Alli Webster, chair of the Surfrider Foundation Santa Cruz chapter, held up a jar filled with butts collected from the beach on a walk. “Anyone would be horrified at the idea of dumping this jar right into the ocean. And yet we walked by hundreds of butts on the ground every day,” Webster said.

The council voted unanimously to direct the Health in all Policies Committee to return to the city council with recommendations by February and to join the state workgroup addressing the economic model associated with tobacco waste.