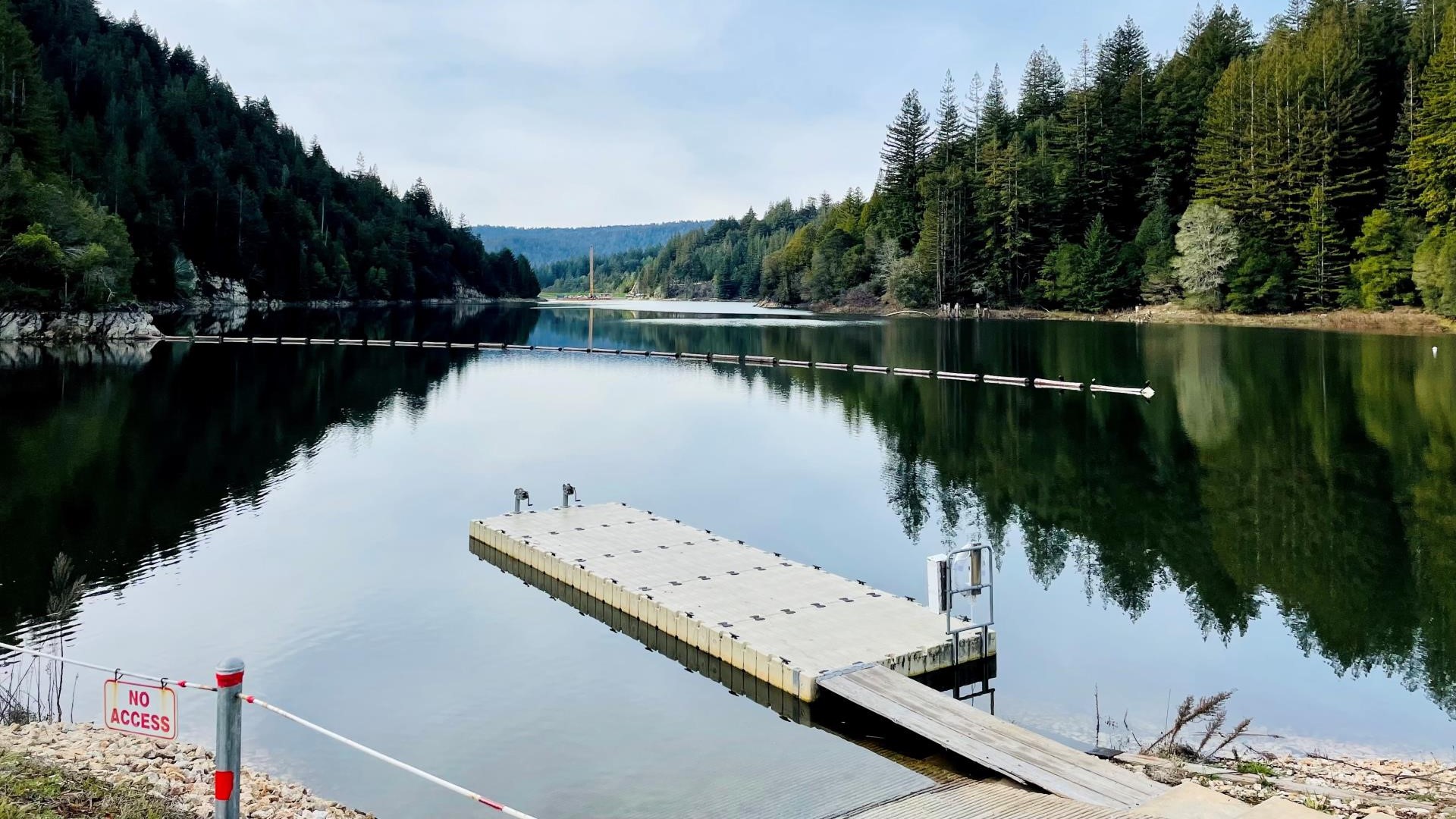 Since the report’s release this spring, water agency leaders said that some collaboration is already happening. Some water leaders added that the report’s recommendations have the potential to complicate an already complex system of water agencies — and it might not solve future water-scarcity problems.

The civil grand jury recommended that by Dec. 31:

The report states that the county’s limited water resources and fractured leadership have led to an environment where water districts sometimes focus more on maintaining water supply for their customers rather than addressing the needs of the county as a whole.

“During interviews on district priorities, phrases such as ‘protect our districts’ surfaced. However, water in Santa Cruz County need not be viewed as a zero-sum game,” the civil grand jury wrote. “Unfortunately, there is no oversight agency or organizational structure in place to resolve conflicts and ensure that outcomes serve the greater good of the entire county,”.

The civil grand jury requires the county’s water agencies and groundwater sustainability agencies boards, as well as the city councils of Santa Cruz and Watsonville, to formally respond to the report’s findings and recommendations by Aug. 22.

The county uses about 17 billion gallons of water each year. About half of that water is used for agriculture. The remainder is used by residents, businesses, governments and others.

Santa Cruz County is in “severe” drought, according to the National Integrated Drought Information System. January to June was about 16 inches of rain short of “normal” rain in that period, making it the second driest January to June in the past 128 years, the drought information system reported.

Climate change has led to longer and more severe droughts and increased odds for heavier and more infrequent storms, according to research from UCLA and other institutions. That variability makes the flow in rivers and creeks less predictable, and makes creating plans to store surface water more difficult, the civil grand jury report stated.

About 80% of the county’s water comes from underground aquifers. Other water comes from the San Lorenzo River and coastal creeks. Decades of climate change and heavy water use have made both sources less reliable, according to the report.

A map shows the major water sources within Santa Cruz County. Unlike much of California, all of the county’s water is sourced from local rivers, streams and aquifers. Most California counties receive water from other counties. (Santa Cruz County Civil Grand Jury)

Decades of groundwater use have depleted the Santa Cruz County’s three main aquifers. Two aquifers, the Santa Cruz Mid-County Basin and the Pajaro Valley Basin, are in “critical overdraft,” according to the California Department of Water Resources. As the groundwater has been extracted, saltwater from the cost has seeped inward, threatening the water quality of the aquifers.

In addition to the groundwater sustainability agencies, the county’s water is managed by five major water districts or departments, dozens of small private water systems and thousands of private wells. Each agency has its own rights to pump specific amounts of groundwater or divert a specific amount of surface water. 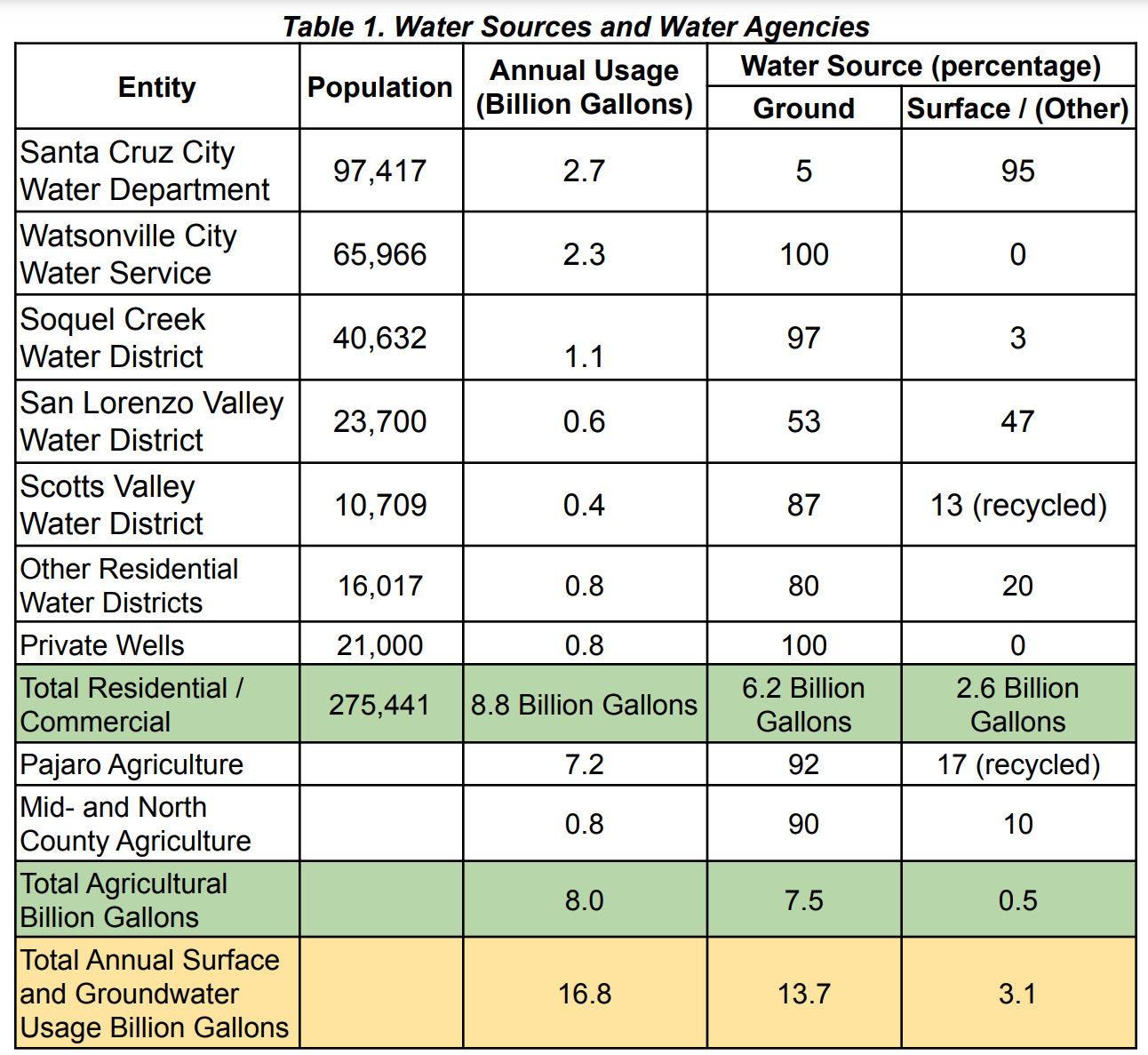 Another example is the Pure Water Soquel Conveyance Project. To help block saltwater intrusion into the Santa Cruz Mid-County Groundwater Basin, construction recently began on a project to inject up to 500 million gallons of purified wastewater each year into coastal wells. The injected treated fresh water is planned to block saltwater from seeping into the wells.

Wastewater will come from the City of Santa Cruz wastewater treatment plant through new underground pipes to a new water purification plant in Live Oak. Work started in December on the plant, and crews have been installing pipes under city and county roads for months. Soquel Creek Water District will operate the injection wells.

Water district leaders said this month that a centralized drought plan isn’t as easy as it sounds. They also said it may not solve the county’s water supply problems.

Piret Harmon, general manager of the Scotts Valley Water District, said a county-level water agency would only add another level of bureaucracy to an already complex system.

“I wish it was simpler,” Harmon said. “It’s not, so we just have to work within the existing framework and make the best out of it.”

“We’ve had for years really a very motivated self interest in working together to find regional solutions,” said Menard. “We know that no one is coming over the hill to save us.”

“There’s that famous old saying that’s attributed to Mark Twain— ‘whiskey is for drinking, water is for fighting,’” said Menard. “Anybody who thinks we could wave a magic wand and tell people they’re not going to control their water rights anymore — that’s not gonna work.”

The City of Santa Cruz is in the process of altering its water rights to allow more flexibility in when and how the city uses water from the San Lorenzo River. The updated rules would allow the city to share water with the Soquel Creek, Scotts Valley, and San Lorenzo Valley water districts during periods of heavy flow.

The rules await approval from the State Control Water Board.

While local water leaders do not foresee a county-wide water district, some small water systems are consolidating with larger ones. That’s due in part to a state law passed in 2021 that requires small water suppliers to proactively plan for drought.

Harmon said that attitude is a roadblock in creating a more interconnected water system. “I see a lot of pointing fingers,” she said. “I see a lot of language like, ‘Don’t come and take our water.’ So that is for me the biggest challenge.”

After the proposed merger was rejected by San Lorenzo Valley Water District’s board, Harmon said Scotts Valley Water is still exploring how to keep water supply stable and rates low in the coming years.

Menard sees the possibility for wastewater recycling in the City of Santa Cruz to increase, but she doesn’t think the civil grand jury’s request for a plan to use all available wastewater by 2026 is feasible.

“There’s no way that resource can be fully utilized in four years,” Menard said. “The process of design, construction, environmental review, permitting, all takes a long time.” Depending on future water conditions and the success of aquifer recharge, the county may not require all of the city’s wastewater to be recycled to meet its water needs, Menard said.

Lockwood, the general manager of the Pajaro Valley Water, works with Watsonville city leaders to recycle 3,000 acre-feet of wastewater each year for farm irrigation in coastal Santa Cruz and Monterey counties. “We’re pretty much using all of the water that’s available for recycling throughout the summer, and then we use a portion of it in the wintertime,” he said.

A Pajaro Valley Water basin management plan from 2014 explored the possibility of expanding water recycling during the winter for injection into the groundwater basin. Costs prompted the project to be deprioritized in favor of other efforts.

“I think to some extent, we’ve checked that box by looking at how we can utilize all the recycled water available to us,” Lockwood said. “When we do the next evaluation of our plan within the next five years, I think we’ll take a close look at the status of the basin and determine if any additional projects are necessary.”

The agency is focusing on projects it hopes to complete by 2025 that include: