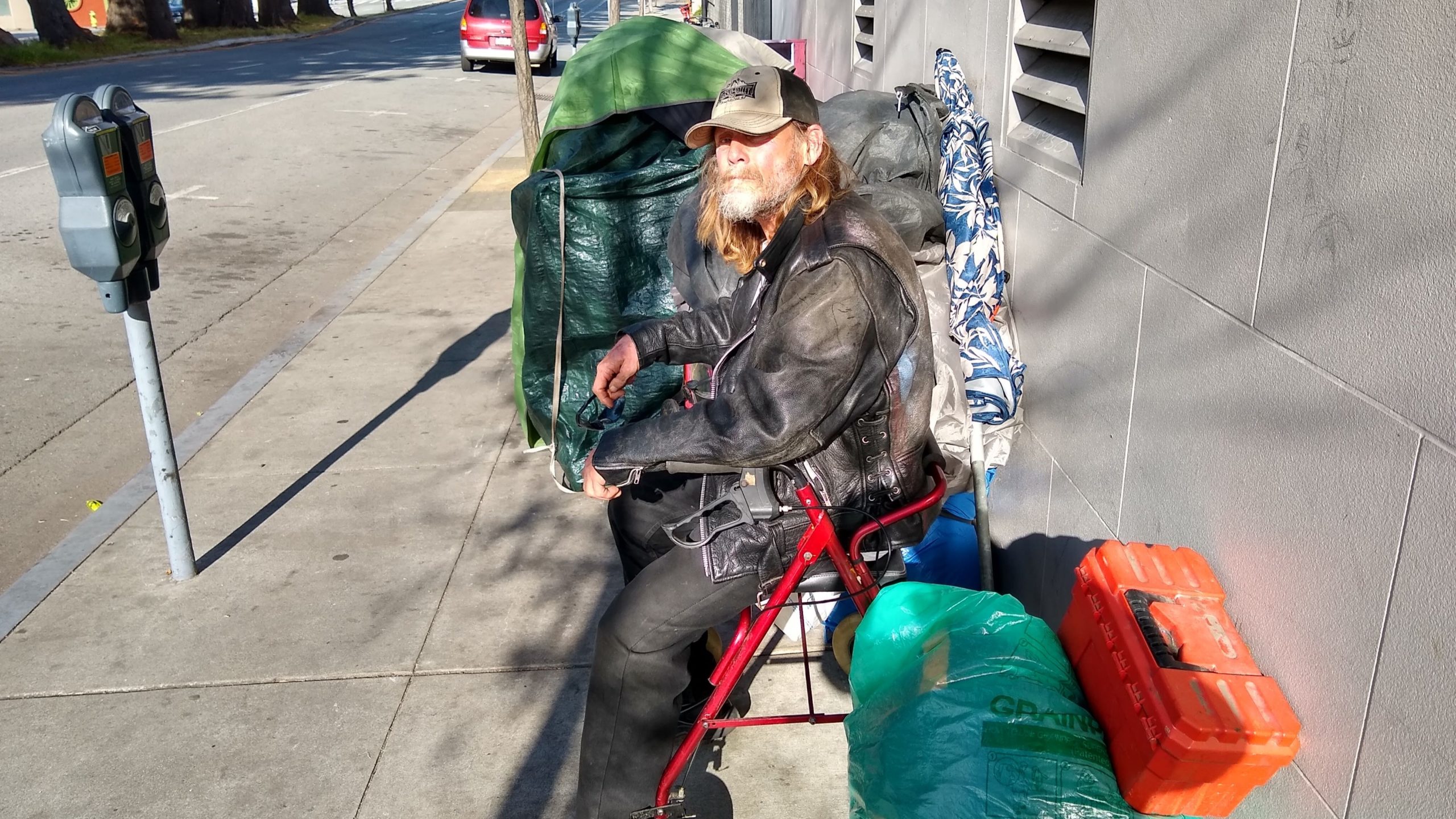 Gary, 63, said he would go to a shelter if it accepted his belongings. He camped near the post office in downtown Santa Cruz in 2020. (Stephen Baxter — Santa Cruz Local file)

SANTA CRUZ >> Midway through Santa Cruz County’s three-year plan to reduce homelessness, county leaders on Tuesday outlined some reasons why homelessness has grown in recent months, as well as some progress toward housing more homeless children and parents.

There are two major goals of the county’s Three-Year Strategic Plan to Address Homelessness:

“We’ve got a really mixed situation in terms of how we’re progressing on these goals,” said Dr. Robert Ratner, director of the county’s Housing for Health Division, at Tuesday’s county supervisors meeting. “With families with children and youth, we saw significant progress,” Ratner said.

The backdrop of the past two years is that Santa Cruz County housing became less affordable, said Randy Morris, director of the County of Santa Cruz Human Services Department, during Tuesday’s meeting. 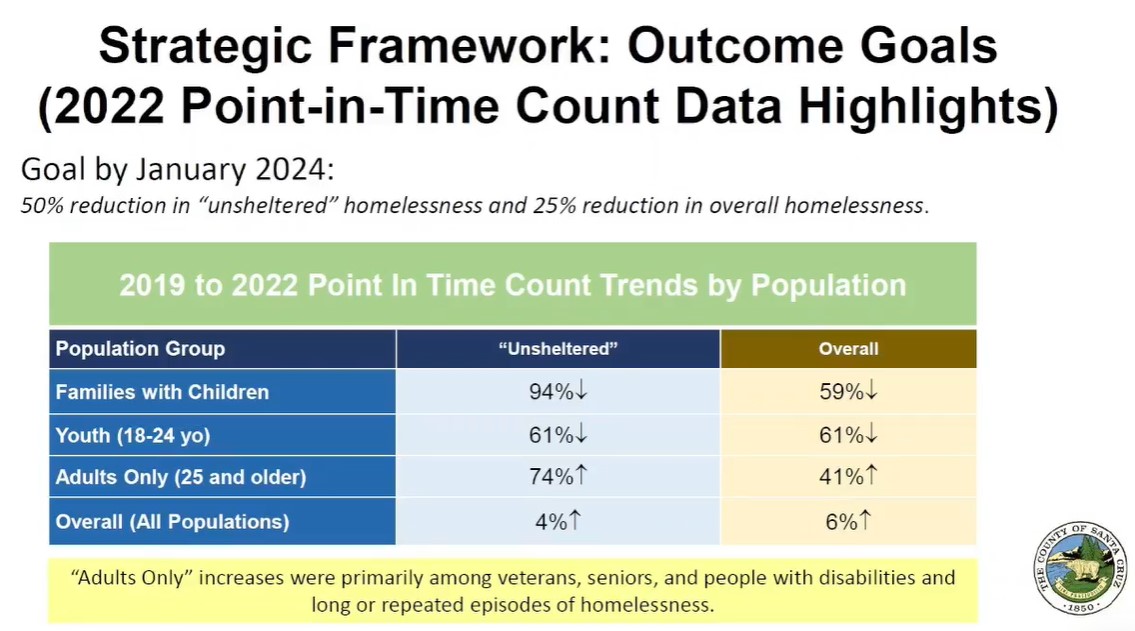 A survey in February showed fewer homeless residents in some categories compared with those categories in 2019. (County of Santa Cruz)

Some trends in Tuesday’s report included:

Some goals of the three-year plan include: 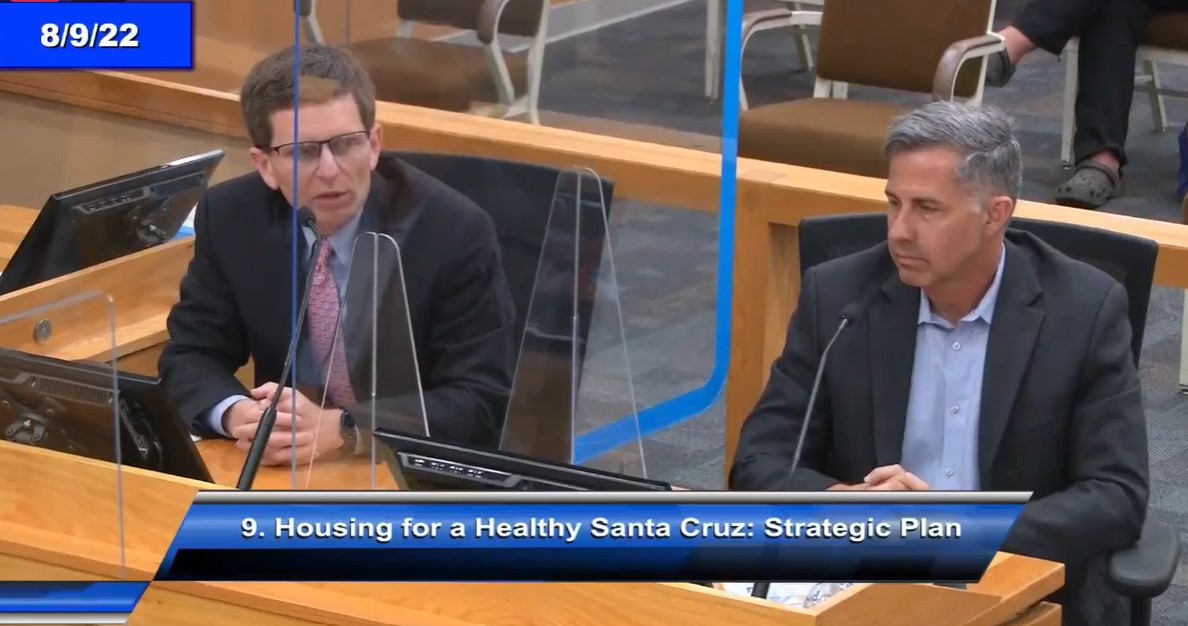 When Manu Koenig, chair of Santa Cruz County Board of Supervisors, asked about shelter costs, Ratner said that subsidizing permanent housing with rental assistance is cheaper.

Many people have Housing Choice vouchers that provide a rent subsidy, but an ongoing problem has been that many landlords will not accept them, county leaders said.

Some county housing navigators have found subsidized rentals in places such as Santa Clara County, but many Santa Cruz County residents have been reluctant to leave in part because they have family support here, Morris said. Others have medical problems or are disabled and rely on friends or family here.

“Being offered an opportunity to move somewhere else where they would lose all of their connections — even if they’ve been here for a long period of time — is a very complicated conversation to have,” Morris said at Tuesday’s meeting. “Adults have a right to self determination and we can’t tell people to leave,” Morris said. 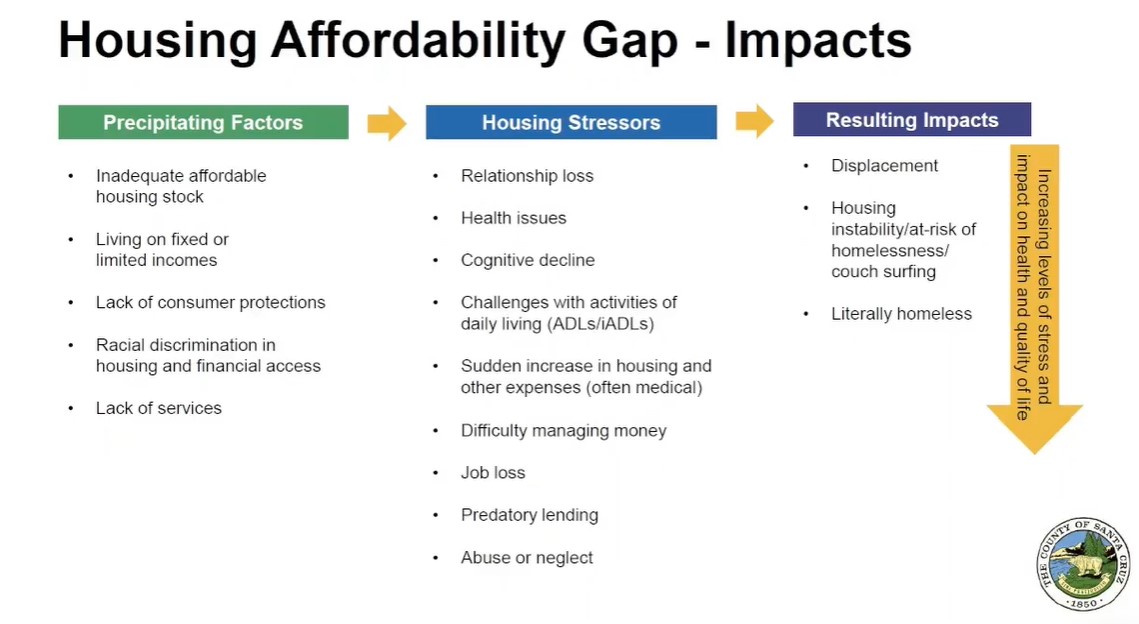 From hotels to homes

County leaders said they are trying to get to 600 permanently funded shelter beds. There were about 387 shelter and “transitional housing” hotel beds in Santa Cruz County in July, Ratner said. 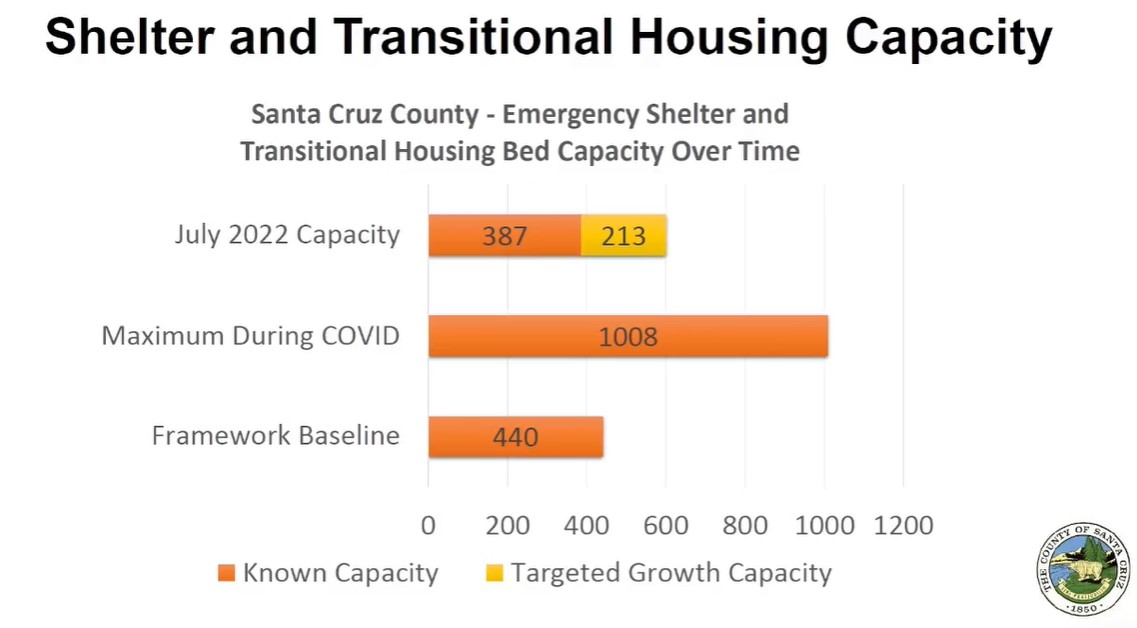 Santa Cruz County leaders said Tuesday there were fewer shelter beds available in July than there were about 18 months ago. (County of Santa Cruz)

Earlier this year, there were 1,008 shelter and hotel beds because there was state money tied to the COVID-19 pandemic. That money expired and the county’s last shelter funded with COVID-related money closed in June.

Because county leaders knew that money would end, they tried to facilitate transitions from those hotel rooms to permanent homes in its Rehousing Wave program. It aimed to help 250 people find permanent housing. At least 145 people found permanent housing before the hotel room money ran out in late June, said Ratner, the county’s Housing for Health director.

Twenty-one of the 323 enrolled in the program died in the past 14 months, according to a county report.

“The lack of available private rental market owners and property managers willing to rent to participants remains the primary barrier to helping participants secure permanent homes within Santa Cruz County,” according to the report.

About 40 people in the program, including some seniors and disabled, were forced to leave hotel rooms and returned to homelessness in late June, program leaders said. 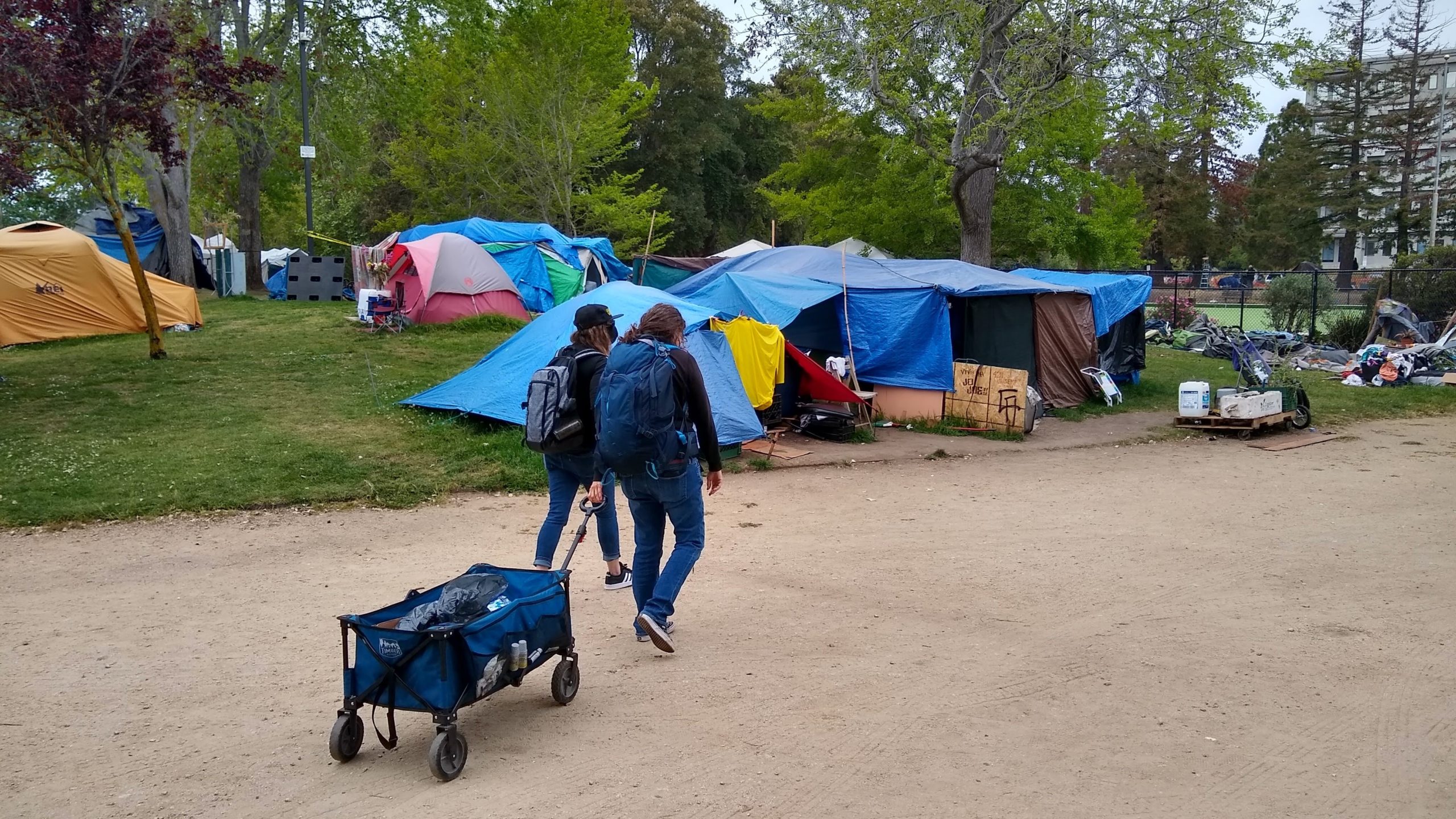 County leaders said they have applied for state Project Homekey money for four affordable housing projects. The state awarded the county about $6.4 million for the 20-unit Veterans Village project in the San Lorenzo Valley.

Nearly $10.7 million was awarded for a 36-unit project at 2838 Park Ave. in Soquel. The project aims to house former foster youths, veterans and families at risk of homelessness.

State leaders have not decided whether to fund a Project Homekey proposal at 801 River St. in Santa Cruz. It proposed five one-bedroom apartments and two studios for chronically homeless people with disabilities.

County leaders have appealed a state decision not to fund a 94-unit Project Homekey proposal in Watsonville. It proposed conversion of the Rodeway Inn at 1620 W. Beach St. into permanent supportive housing for the homeless or people at risk of homelessness. 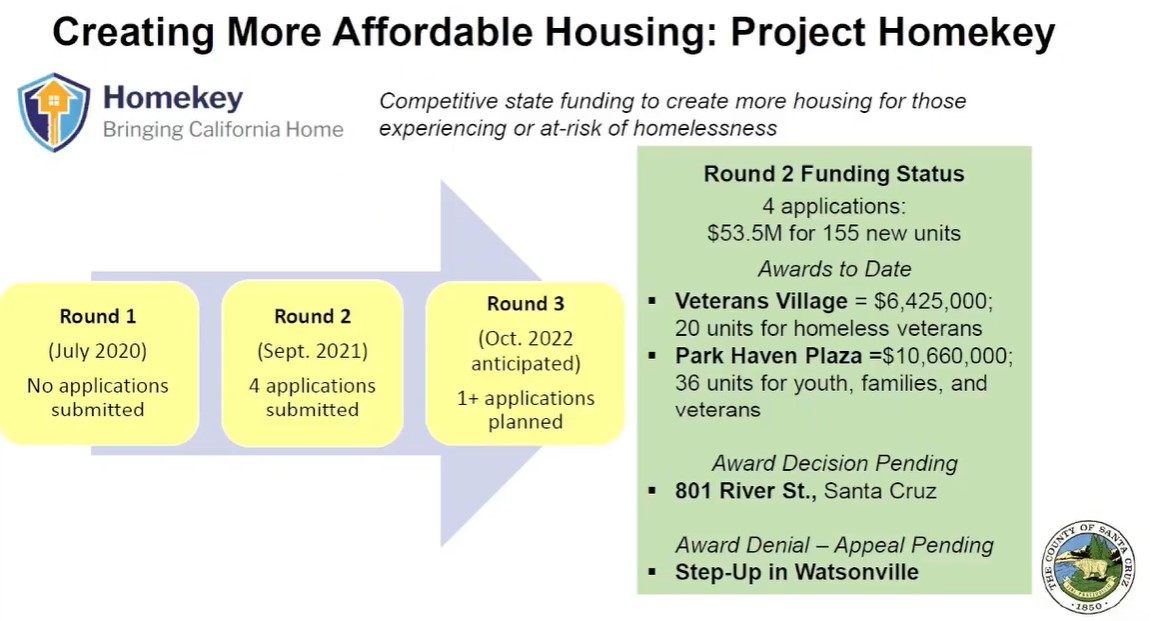 County leaders described some housing projects in the works with state money. (County of Santa Cruz)

County leaders said that trying to house more on veterans will be a focus in the next six months. Trying to court more landlords to accept Housing Choice vouchers and continuing rental assistance programs also are priorities.

“Veterans are a next logical group to focus on and really try to make substantive inroads in reducing homelessness among that population while, of course, continuing our commitment to youth and families,” said Manu Koenig, the county supervisors chair. 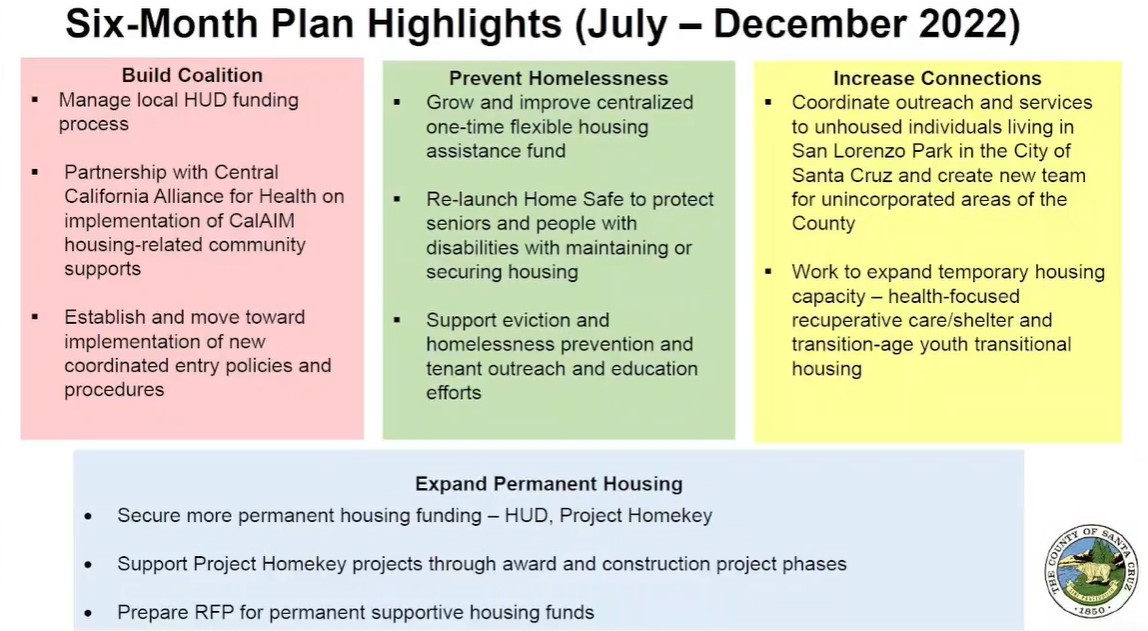 Plans in the next six months aim to help seniors and veterans maintain and secure housing. (County of Santa Cruz)

Morris, the director of county Human Services, said that a state proposal to help more people get services for mental health problems would be a “profound game changer” for their work.

Community Assistance, Recovery and Empowerment Court is a “proposed framework to deliver mental health and substance use disorder services to the most severely impaired Californians who too often languish – suffering in homelessness or incarceration – without the treatment they desperately need,” according to a California Health and Human Services website.

A bill to enact it, SB1338, is headed to the State Assembly Appropriations Committee on Aug. 11.

Morris said if the bill becomes law it is likely to be “gummed up in court systems.” But, he said, “It’s an effort by our governor to try to address this issue.”