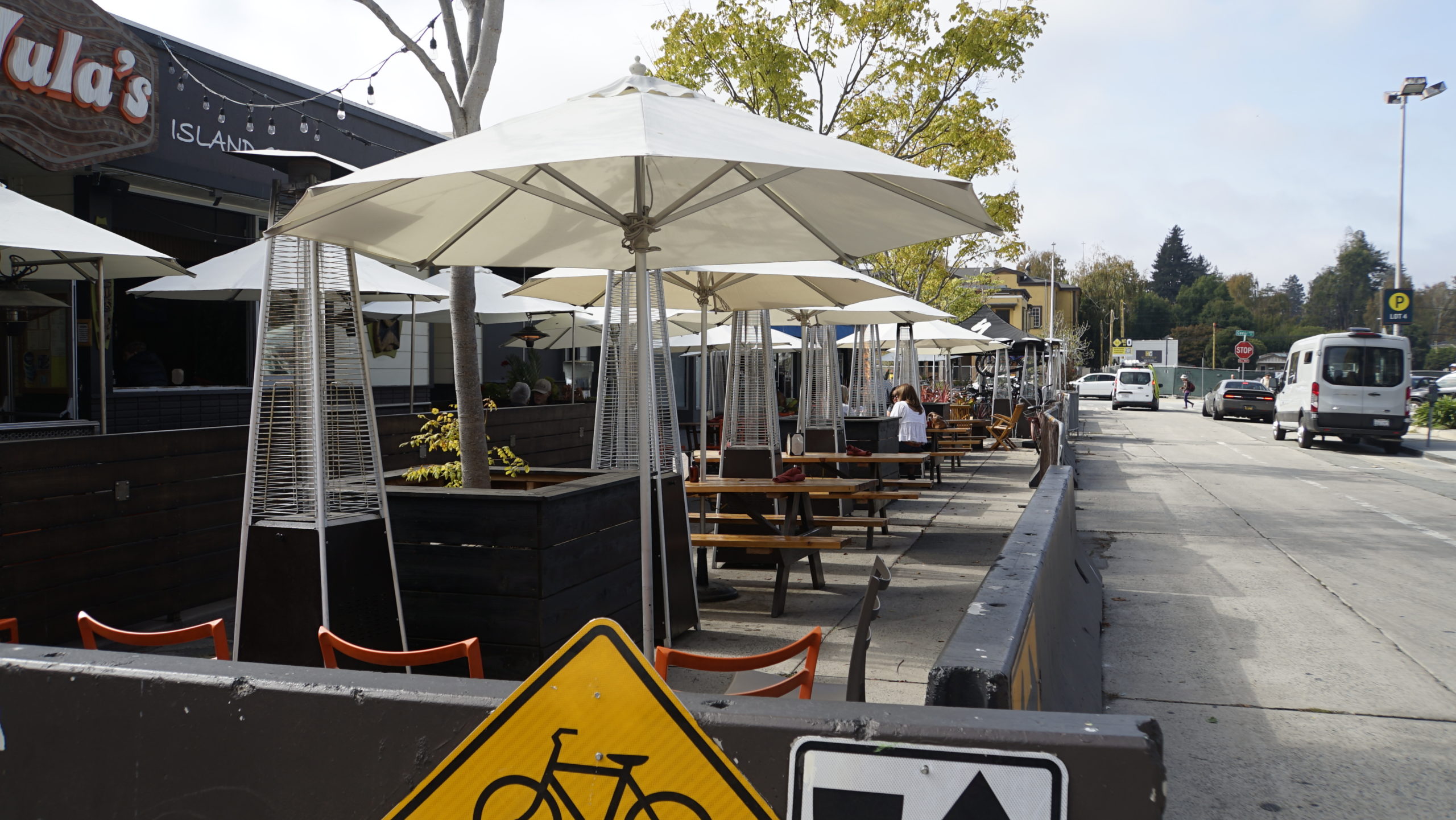 The council voted to bring the parklet guidelines and fee schedule to its Nov. 15 council meeting for potential adoption. The council plans to consider rules for outdoor dining on private property early next year.

The new rules would allow parklets citywide on streets with speed limits of 25 mph or less. Each parklet would need to:

City staff is expected to present a program that allows some business leaders to take out a loan for the permanent parklet and have a portion of the loan forgiven each year. The program would only apply to businesses that operate on public parking lots, and it would forgive up to 50% of the loan.

“Businesses will be able to look long term, and in effect turn part of a loan into a grant” said Santa Cruz Economic Development Director Bonnie Lipscomb, at Tuesday’s meeting.

City staff plans to bring the pre-approved designs and loan program to the council at its Nov. 15 meeting. If the parklet law is adopted, applications would open Dec. 15, 2022 to March 31, 2023. After March, unused parklets will be deconstructed, city staff said.

Businesses that operate temporary parklets now will be permitted to keep their temporary outdoor dining in place while their permits are under review and they prepare for construction or retrofit, city staff said. New permanent parklets would be in place by the end of October 2023.

Under the proposed ordinance, businesses with parklets on public parking lots would pay:

Alexis Carr, manager at Soif Restaurant, said she was uneasy about the possibility of the parklet design rules changing again in the future. Soif closed its restaurant on Walnut Avenue in January. It operates an adjacent retail wine shop and wine club.

“We’ve all invested so much in parklets already,” Carr said. “It’s kind of scary, to be perfectly frank,” she said.

The council voted to bring the parklet guidelines and fee schedule for adoption at the Nov. 15 council meeting and to coordinate with the Coastal Commission to authorize permanent parklets in the Coastal Zone.

The motion passed 5-2 with Councilmembers Justin Cummings and Sandy Brown opposed. “While I’m supportive of his having this kind of ordinance, I think that it would be in the best interest of the community,” said Cummings. “I know that a lot of community members would like to weigh in on this more before we take action.”

A separate motion to form a subcommittee to gather more feedback from business owners about the parklet program passed unanimously.

In 2020, the council authorized a closure of the eastbound lane of Cathcart Street from Cedar Street to Pacific Avenue for outdoor dining. But the closure could limit the fire department’s ability to respond to emergencies downtown, said Deputy Fire Marshal Tim Shields.

“When the COVID pandemic happened, we made a lot of concessions in terms of safety to allow these parklets to happen,” said Shields. “But at some point, we’re gonna have to draw the hard line and open this road up.”

Ian McRae, owner of Hula’s Island Grill, said the closure will remove 56 seats from his restaurant’s outdoor dining capacity. “If we lose 56 seats, there’s just, there’s no way we can continue without laying people off,” McRae said. He asked the council to leave the street one way for two years so he could look at other outdoor dining options.