“The past couple years have been a challenge,” Estorga said. City leaders have not had enough money to hire enough city staff in recent years, Estorga said, in part because of the COVID-19 pandemic and problems related to the CZU Lightning Complex Fire in 2020. Revenue from a city sales tax hike approved by Scotts Valley voters in 2020 has helped turn the tide. 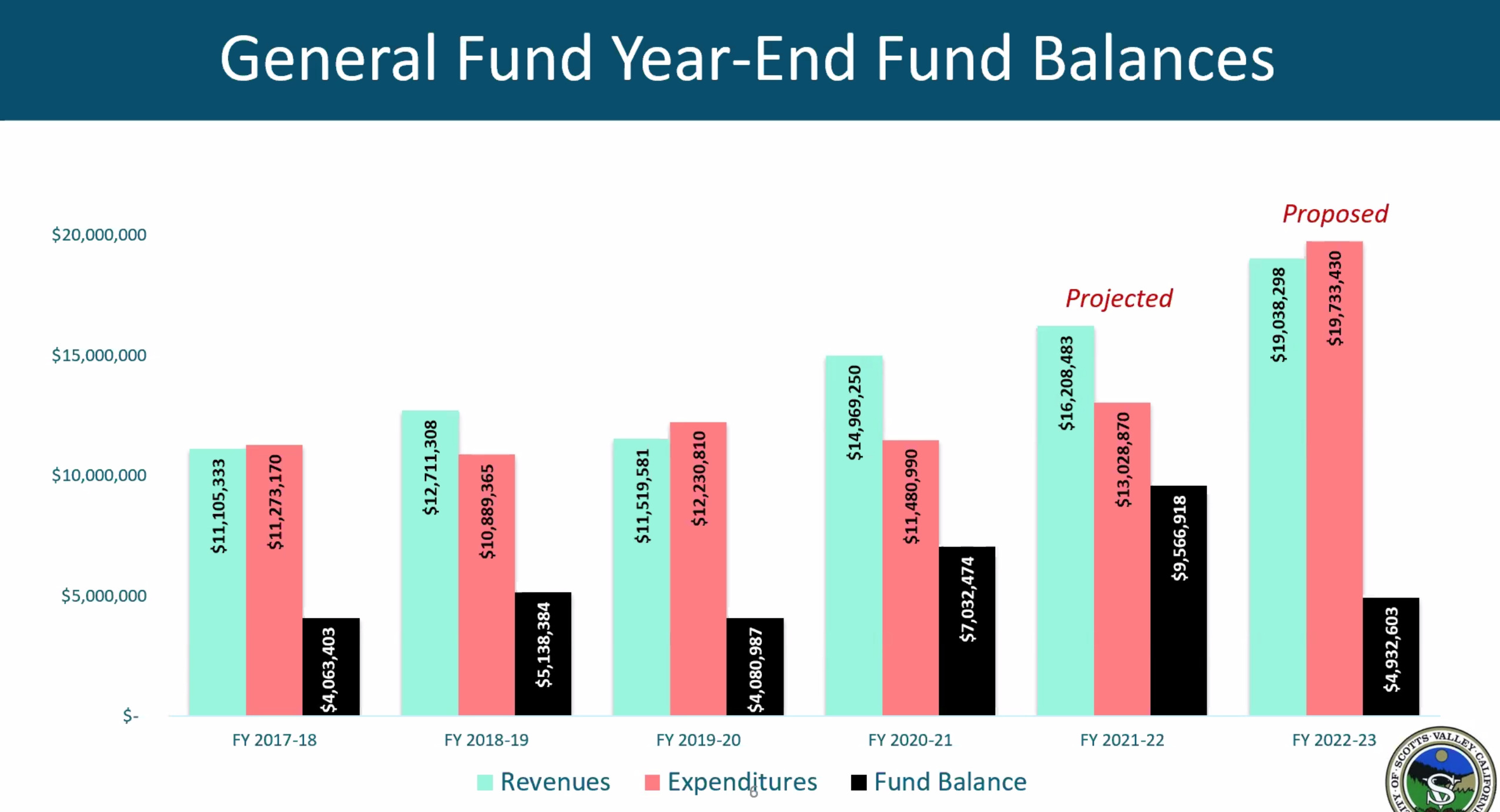 Scotts Valley’s finances have started to rebound from a fiscal emergency in 2020, city leaders said. The proposed 2022-23 budget proposes more spending because of years of deferred maintenance, staff said. (City of Scotts Valley).

The city is also using the San Rafael-based financial consultant firm NHA Advisors to help the city with plans to fund employee pensions. The consultants are expected to present a plan this fall. 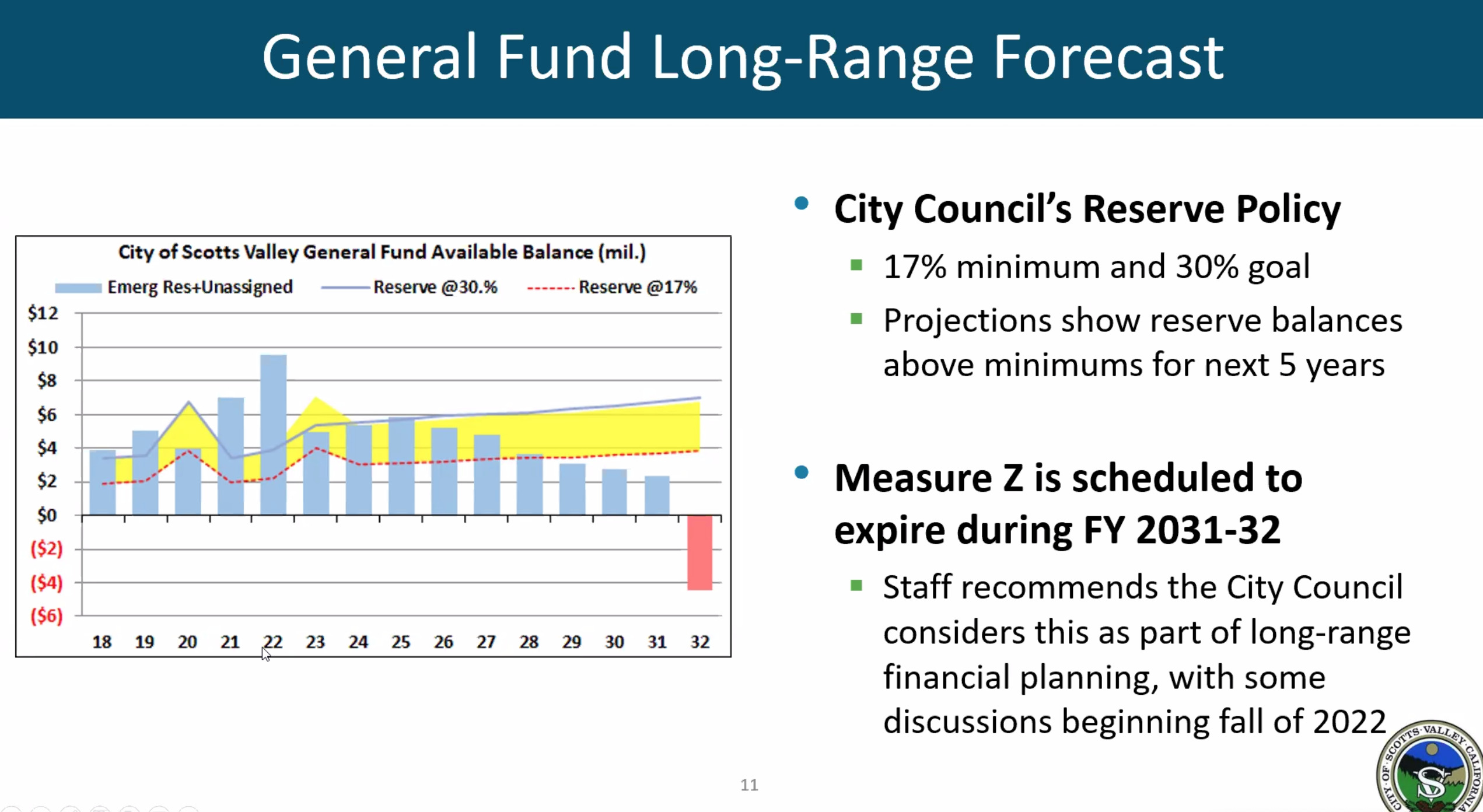 A proposed Scotts Valley budget calls for a roughly $100,000 General Fund deficit, which would draw reserves down to about $5 million. (City of Scotts Valley)

Measure Z was a sales tax increase approved by city voters in March 2020 after the city declared a fiscal emergency. Sales tax revenue “has accounted for over 30% of all General Fund revenues,” in the years since its adoption, Estorga said.

“We are seeing sales tax revenues spike right now, partially as a result of inflation. So everything costs an extra dollar more and with sales tax percent of that transaction, the city is enjoying additional revenues,” he said. Estorga added that predictions of a coming recession mean the tax could bring in less money in the future.

The city’s revenue from the city hotel tax has also improved to near pre-pandemic levels as city hotels have had more visitors. The 11% surcharge is billed to hotel guests.

Although long-term economic forecasts predict continued stability in the coming years, Estorga said the city will have to find a new source of revenue when Measure Z expires in 2031.

Vice Mayor Jim Reed said the council had previously discussed trying to renew the tax in 2028 at the same time as the presidential election.

The final budget is expected to be presented to the city council for approval on June 15.

Scotts Valley City Council has met online only since the start of the COVID-19 pandemic in 2020. The council chamber sits empty this week. (Kara Meyberg Guzman — Santa Cruz Local)

Reports to Scotts Valley police of the city’s most severe crimes, including rape, robbery and auto theft, decreased by 11% in 2021, according to the Scotts Valley Police annual report.

“Almost all serious crimes in our city decreased dramatically,” said Scotts Valley Police Chief Steve Walpole.  All other reported crimes increased by 24% relative to 2020. Arrests in the city increased by 14% and officers wrote 65% more tickets in 2021, the report stated.

The new flag policy allows for commemorative flags that are non-political and aligned with the city’s strategic goals to be flown with a majority approval from city council. Councilmembers Randy Johnson and Vice Mayor Reed advised against the policy, saying that the rule could expose the city to litigation if the council denies other groups the opportunity to fly flags.

“You’ve coupled the rainbow flag with this policy,” said Johnson. “But will you feel the same way if citizens for Second Amendment rights want to come forward and fly their flag?”

Reed proposed an alternative policy that would have allowed the pride flag to be flown, but it would not create a process for other commemorative flags to be considered. That proposal was rejected by the council in a 2-3 vote, with Reed and Johnson in support. Mayor Donna Lind and Councilmembers Jack Dilles and Derek Timm opposed.

Timm said the policy would send a message of support to LGBT youth who face discrimination. “I think of those high school students who may be hiding who they are out of fear, and I think as civic leaders it’s our responsibility, it’s our duty, to not be silent,” Timm said.

Several community members spoke in support of a policy that allowed the LGBT flag. “I believe that Scotts Valley is a welcoming and safe place for the LGBTQI community and tonight you have a chance to tell others like me, that that’s the case,” said Monica Martinez. Santa Cruz City Councilmember Donna Meyers and Watsonville City Councilmember Jimmy Dutra both spoke in support of the policy.

The original flag policy passed with a 3-2 vote, with Reed and Johnson opposed. After the policy was adopted, the council voted unanimously to fly the pride flag during June.