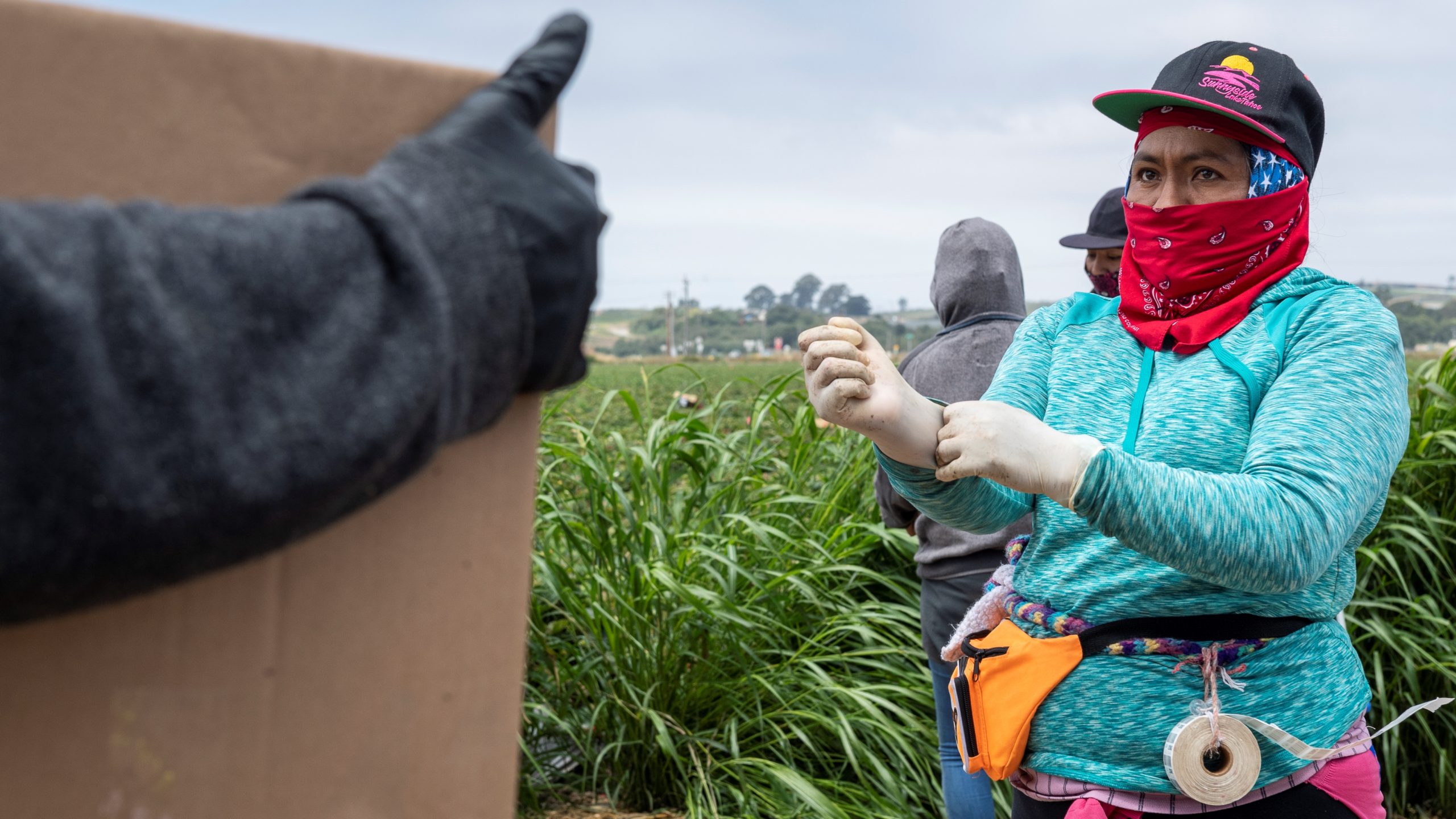 A woman puts on gloves before she returns to pick strawberries in Watsonville in August 2020. (David Rodriguez — The Salinas Californian)

WATSONVILLE >> After years of pesticide use near some South County schools, a new alert system has tried to reduce health problems by sending text messages to registered parents days before the toxins are applied. A statewide pesticide alert system is set to start in 2023 or 2024, but advocates say they want a Santa Cruz County system sooner to help protect children and other residents from potentially cancer-causing pesticide applications.

Ann López, executive director of the Santa Cruz County-based nonprofit Center for Farmworker Families, said she has seen families’ health problems from pesticides firsthand. Some children of farmworkers in Santa Cruz and Monterey counties have developed asthma, learning disabilities and cancer, she said.

“It’s an epidemic,” López said. “It’s environmental racism. This would never go on in Saratoga or Los Gatos.”

Although there are notifications of pesticide application near some schools in Pajaro Valley Unified School District, López and other advocates want notices posted online and sent to residents before pesticides are applied. Notices allow residents to take simple precautions like shutting windows that can reduce exposure and potential harm from pesticide drift.

Research has suggested that taking such precautions during pesticide applications can reduce exposure to the toxic chemicals and reduce negative health effects.

The studies of health risks during pesticide application are “truly alarming,” said Mark Weller, an organizer for Californians for Pesticide Reform. The group is a statewide coalition based in Berkeley. Weller called the exposure and health effects “a violation of civil rights.”

Prevalence and problems with pesticides

Many growers in Pajaro Valley depend on pesticides to prevent plant diseases, boost crop yields and control weeds. On berry fields, gaseous pesticides known as fumigants are injected into the soil. Plastic tarps usually prevent the gases from contaminating the air, although strong winds sometimes disrupt the tarps, state records showed.

From 2000 to 2010, carcinogenic pesticides applied on Santa Cruz County fields were double the amount applied during the 1990s, according to a report from Californians for Pesticide Reform and records from the California Department of Pesticide Regulation.

In the past five years, pesticide use has declined. Stricter Santa Cruz County regulations and some conversion to organic operations have contributed, Weller and school leaders said.

For children of farmworkers, exposure to pesticides can be a constant problem — not only on application days. Pesticides can be carried home on parents’ cars, shoes, clothing and skin, studies have suggested.

The applications all happened on Saturdays — when classes were not in session — in compliance with county regulations. Growers used chloropicrin, which can irritate the eyes, lungs and skin, studies have shown. Some applications also used 1,3 dichloropropene, which the EPA classifies as a “likely” cause of cancer. Both products are injected beneath an impermeable tarp, which prevents the chemical from spreading into the surrounding air, according to the Santa Cruz County agricultural commissioner’s office.

Pesticides also have the potential to harm infants and even children in the womb, according to recent studies. Two UCLA papers published in 2020 and 2021 suggested that children were more likely to develop certain brain and blood cancers if their mother had been exposed to certain pesticides while pregnant.

An earlier UC Berkeley study about children in Salinas Valley suggested that exposure to pesticides as a fetus or infant can be associated with learning disabilities, poor lung function and other conditions. 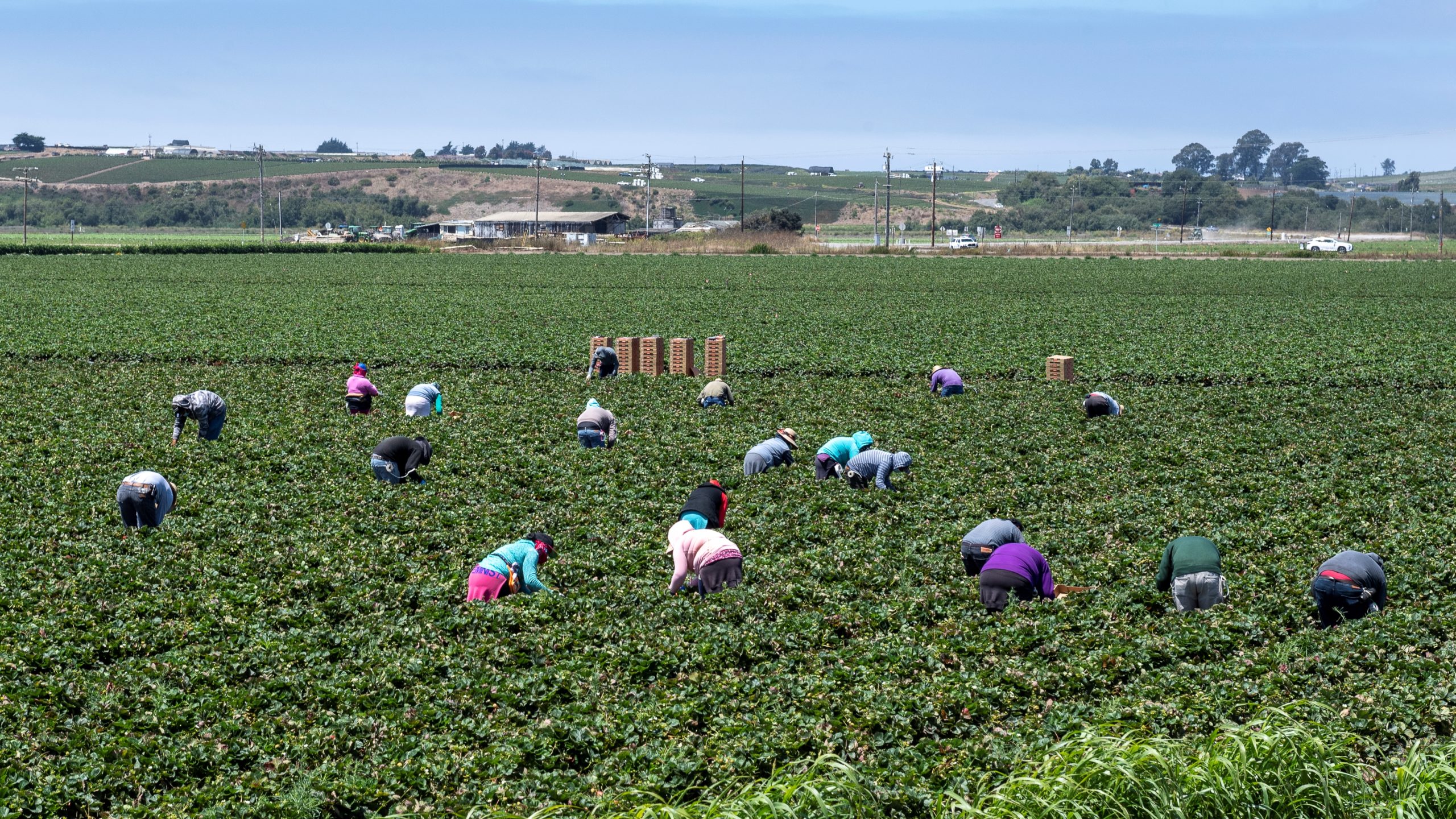 Since 2018 in California, fumigant pesticides may not be used within a quarter mile of schools within 36 hours of the following school day. Those rules basically make Saturdays the only day that fumigants can be applied, said Michelle Rodriguez, superintendent of Pajaro Valley Unified School District. The idea is that fumigants dissipate on Sunday before school resumes Monday.

Days before fumigants are applied near the Pajaro Valley Unified schools in Santa Cruz County, fliers in English and Spanish are posted around the school, Rodriguez said. Last school year, the district also started sending text messages to parents who register with the school’s administration.

Rodriguez noted that many students in the district are the children of farmworkers. “We live within a rich agricultural community that’s very important to the livelihood of many people,” Rodriguez said. “At the same token, we want to support the health and safety of our students.”

Notifications of pesticide use within the county are for fumigants applied within a quarter mile of Pajaro Valley Unified School District schools. Weller said the concern is not just with fumigants, but with other forms of pesticides. What’s more, he said, “Pesticides drift much further than a quarter mile.”

Bonny Doon Elementary and Brook Knoll Elementary in Scotts Valley also have agricultural lands within a quarter mile of their campuses, but neither receives noticies before fumigation, according to the county agricultural commissioner’s office. No pesticides have been applied near either school during the past six months, according to county records.

Bay View Elementary in Santa Cruz is also on this list, but the agricultural land is the community garden in Trescony Park, county records state.

Pesticide application notices also are not provided to the 17 preschools and daycares across Santa Cruz County that are within a quarter mile of agricultural fields, county officials said.

In Monterey County, notifications are more broad and anyone can get them.

Since 2018, Ohlone Elementary and Pajaro Middle schools in Monterey County have participated in Farming Safely Near Schools. It’s a pesticide notification pilot program where anyone can sign up for email or text alerts before pesticides are applied near certain schools.

Juan Hidalgo, Santa Cruz County’s agricultural commissioner, said that although a more expansive notification program “has been considered,” his office lacks the staff and money to implement it.

Advocates have suggested that the commissioner post online the forms that growers provide the commissioner’s office prior to pesticide application. But Hidalgo said developing an effective notification system wouldn’t be so simple. “It’s not just about posting information on the website,” he said. “It’s also about having people who can communicate with members of the public about that information.”

In June 2021, the Santa Cruz County Grand Jury submitted a report that proposed a more expansive notification program. The civil grand jury often makes recommendations for county reforms on a variety of topics, but county supervisors have wide discretion on whether to implement them.

In September, required responses from the Santa Cruz County supervisors disagreed with some of the grand jury’s recommendations. Because a statewide notification program is slated to start in 2023 or 2024, the supervisors wrote that it essentially did not make sense to create a separate version for Santa Cruz County.

“Given the interest for notification in other regions of the state and the efforts (the state Department of Pesticide Regulation) is undertaking on this issue, it is appropriate that the feasibility of a notification program be evaluated statewide rather than at the local level so that if such a program is implemented in the future there is equity and consistency,” the report stated.

In 2021, California leaders set aside $10 million to create a statewide system for pesticide notification. Which pesticides would be included, and when notifications would be sent, has yet to be determined, according to the state’s Department of Pesticide Regulation.

State leaders held community focus groups in August 2021 and held webinar presentations in November. Further public workshops are planned for early this year but have not yet been scheduled.

Pajaro Valley Unified School District teacher Sarah Rigler attended the state’s November meeting and was one of many who expressed frustration with the state’s pace to start universal notifications.

“I personally, along with my colleagues and students, were affected by pesticide drift several times while being next to an adjacent field,” Rigler said during the meeting. “Never any notification whatsoever from our county ag commissioner or the (Department of Pesticide Regulation). We were getting sick on the school campus from this (pesticide) application. We need this [notification system] immediately, do not wait till 2024.”

Karen Morrison, Department of Pesticide Regulation acting chief deputy director, said in an interview that her agency needed time to get the statewide notices right.

“We understand the frustration on the part of community members who have really been looking at this for a while and are very interested in having the system as soon as possible,” Morrison said. “For us to implement a fully statewide system, we do need to go through the regulatory process of establishing new regulations and rulemaking, and that unfortunately takes time.” Pilot programs for the new notification system will roll out in some parts of the state in 2022, she said.

It’s not clear whether the pilot will include Santa Cruz County. Advocates want action sooner.

“The fact that the agricultural commissioners do not want to immediately post on the internet what (growers) are using, where they’re using it, and when, it just astounds me,” said Ann López, the Center for Farmworker Families director.

“We can’t wait,” López said. “We need to stop it now. Our children are paying the price.”

Photos are by David Rodriguez for the Salinas Californian, as part of a package produced for the COVID-19 Information Hub at LocalNewsMatters.org. The Info Hub is a collaborative project supported by the JSK Fellowship Program at Stanford University.