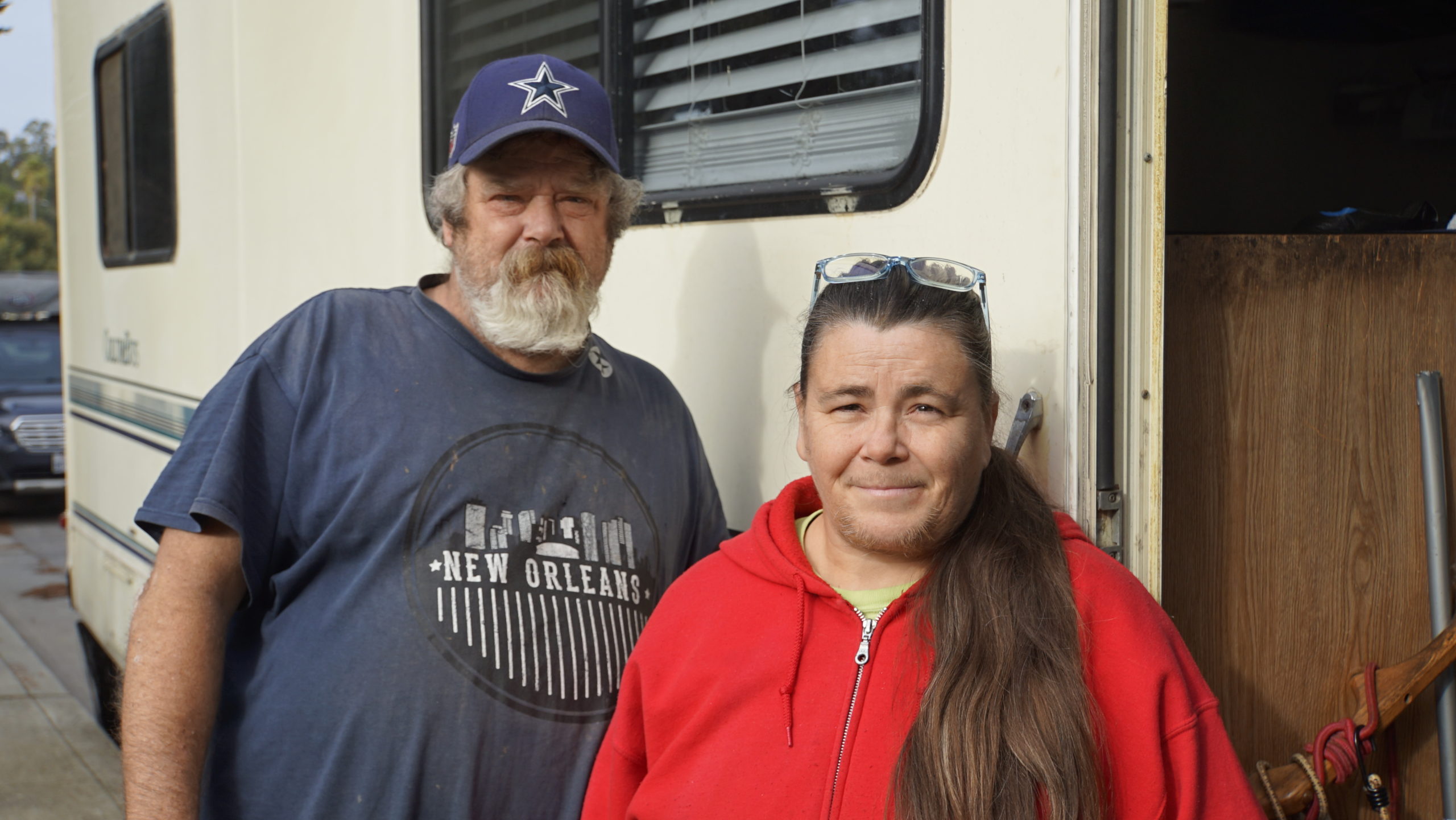 Brian Ashe and Sherri Fry have lived in their RV in Santa Cruz for four years. They parked on Natural Bridges Drive on Tuesday afternoon because “it’s one of the few places to park that’s out of people’s way,” Ashe said. (Kara Meyberg Guzman — Santa Cruz Local)

SANTA CRUZ >> The Santa Cruz City Council voted 5-2 Tuesday to advance a proposed law that would limit overnight parking for many people who live in RVs.

The proposal comes in response to some Westside residents’ concerns about trash, waste and crime related to people who live in their vehicles. The proposal has changed slightly since the council discussed an early concept at a Sept. 22 special meeting.

The council is expected to discuss the proposed law again soon. If approved, the law would take effect 30 days after that hearing.

The safe parking programs would prioritize families with children, unaccompanied minors and youth aged 18 to 24.

Cummings and Brown said they supported the safe-sleeping expansion and the attempt to reduce the impact of oversized vehicles. But it was unclear that the city had the money, staff and partnerships to implement the programs and enforce the rules, they said.

Meyers said she supported the proposed law because it would show that city leaders are creating policies to address homelessness. That makes it easier to get state and federal funding, she said.

In recent weeks, the council has received about 400 emails from residents. Many were against the proposed law and many were in favor of it. In Tuesday’s online meeting, a few dozen residents spoke and submitted online comments to the city’s new public comment tool.

What do some RV drivers think?

Tuesday afternoon, about a dozen RVs and oversize trailers were parked along Delaware Avenue and Natural Bridges Drive in Santa Cruz.

Brian Ashe, 55, and Sherri Fry, 50, regularly park their 30-foot RV on Natural Bridges Drive during the day. “It’s one of the few places to park that’s out of people’s way,” Ashe said. At night, they park at the Santa Cruz Church of Christ near Morrissey Boulevard.

Ashe said he was laid off from his retail management job in Washington state six years ago. The couple downsized to their RV. They moved to Santa Cruz four years ago to be closer to family. Using their minivan, they earn a living as drivers for food delivery mobile apps.

Ashe said he’d like to see city leaders create permanent parking spots for RVs because he spends about $100 in gas each week shuttling between the church lot, Natural Bridges Drive and a dump station at New Brighton State Beach.

Fry and other RV drivers have said they want the city to add more dumpsters in areas where RV drivers park. That would help with issues with litter and trash. She said they often take their trash to dumpsters on UC Santa Cruz’s campuses.

Longtime Santa Cruz resident Rosalie Rodriguez, 61, said she picks up litter every day on Delaware Avenue and carries it to a dumpster at the end of the street. Rodriguez lives in a 25-foot RV with her daughter and her 12-year-old grandson. Tuesday, they were parked on Delaware Avenue.

Rodriguez is opposed to the proposed law. She said she wanted to get other RV drivers to comment at Tuesday’s council meeting, but many of them didn’t know how to access the online meeting and didn’t have internet access.

If the law is adopted, Rodriguez said her family would have to find somewhere else to park. “I don’t know, up the coast,” Rodriguez said.

She said her family will “never again” participate in a local safe parking program after a manager was rude. He banged on their door when they overslept by 15 minutes, Rodriguez said. She said it was difficult to get the 12-year-old to school.

“I just want to get out of here, buy a piece of property, get up in the mountains,” Rodriguez said.

The law would update the city’s 2015 overnight parking ban and align it with a new city law that limits where and when homeless people can camp.

The city’s overnight RV parking ban required a Coastal Commission permit to take effect. At a Coastal Commission hearing in 2016, several commissioners expressed concern about the law and called it “onerous,” “drastic” and “draconian.” The commission voted 11-1 to investigate the law in a public hearing. The hearing has not been scheduled.

Tuesday, Deputy City Manager Lee Butler and a lawyer at the city attorney’s office said that other California cities have passed similar RV parking limits. They said the Coastal Commission has not approved their permits.

Other cities have enforced RV parking bans without the commission’s permit. The fines for unpermitted development, which includes changes to coastal access, range from $1,000 to $15,000 per day, according to the Coastal Commission’s website.