This is Santa Cruz Local’s newsletter issue for Sunday, Sept. 26, 2021. Our newsletter informs Santa Cruz County residents of big decisions in local government and how to get involved.

1 / SANTA CRUZ COUNTY BOARD OF SUPERVISORS

Santa Cruz County Board Chairman Bruce McPherson is expected to send a letter to the California Public Utilities Commission that requests an investigation into the overuse of a “fast trip” setting that had brought power outages to thousands of residents in the San Lorenzo Valley, Corralitos, Aptos and rural areas near Watsonville in recent months.

The “fast trip” setting essentially triggers an outage to reduce the risk of Pacific Gas & Electric Co. equipment causing a wildfire. For instance, a squirrel came in contact with a transformer in the San Lorenzo Valley on Sept. 20. Power was shut down for 5,600 customers in the San Lorenzo Valley including at schools, wrote McPherson and Santa Cruz County Supervisor Zach Friend, in a county report.

“The outages are more than just an inconvenience; they are a life safety and health issue. Without power, residents who rely on wells can’t pump water or use their sanitation systems,” the supervisors wrote. “Losing power has a profound impact on seniors and others who need reliable power service for medical equipment. Students and workers cannot study or work from home without power and Internet access. Businesses struggle to operate without power, thus causing the loss of revenue that keeps people employed,” they wrote.

“We would instead encourage PG&E to prioritize hardening the lines in these areas including undergrounding,” they wrote.

A debris-flow study of the CZU Lightning Complex Fire zone is expected to be presented that provides the most detailed, widest look yet at areas prone to slides and areas that might be safer. The Community Foundation of Santa Cruz County hired Atkins Engineering Consultants to create the study.

“The study will provide a much clearer picture of the level of risk for each property owner in the study area,” wrote Paia Levine, Santa Cruz County’s acting planning director, in a county document.

County supervisors are expected to acknowledge the second year of a drought and ask that residents voluntarily reduce water use by 15%. Gov. Gavin Newsom declared a drought emergency on July 8 and asked residents to conserve.

To participate: Join on Zoom or dial 1-669-900-6833, meeting ID  840 7832 7816. To comment ahead of time, email [email protected] or visit the agenda and click the speech bubble icon next to the agenda item. The meeting will also be broadcast on Facebook with no login required.

Pogonip farm proposal to be discussed

A map shows a new location for a proposed farm next to the Pogonip Clubhouse. (Homeless Garden Project)

The Santa Cruz City Council is expected to discuss a schedule, costs and planning of a new location for a proposed farm in Pogonip.

The Homeless Garden Project has planned a farm in a Pogonip meadow near Golf Club Drive for years. Because of lead contamination related to skeet shooting in the lower meadow, project leaders want to relocate the proposed farm to a meadow uphill and closer to the defunct Pogonip Clubhouse. The move would require a change to the Pogonip Master Plan with public hearings and environmental review.

The Homeless Garden Project is a nonprofit group that trains and employs homeless people in farm work. It has a farm on Shaffer Road at Delaware Avenue and a store on Pacific Avenue.

In 2015, local government leaders began to shift toward a results-based framework for grant allocation. An extension of this shift continued this year with community meetings to understand how the funding process could be more equitable.

Tuesday, the Santa Cruz City Council will discuss possible changes to the funding model and grant structures. The council is not expected to make decisions on which organizations will be funded. A more detailed discussion on the application process is expected at the council’s Nov. 9 meeting.

Tuesday, as part of its consent agenda, the city council is expected to decide whether to allocate $11,000 annually for rent help for city residents. Funding would end in June 2024. The program aims to help residents of the Beach Flats and Lower Ocean neighborhoods.

Money would come from American Red Cross loan payments to the city related to the disaster relief after the 1989 Loma Prieta Earthquake.

Two candidates have qualified for a Dec. 7 election to replace Watsonville City Councilmember Aurelio Gonzalez. Gonzalez stepped down this month because of a family emergency, he said.

Frank Barba and Vanessa Quiroz-Carter are the candidates. Quiroz-Carter ran unsuccessfully against Gonzalez in the November 2020 election. Gonzalez was an incumbent.

Tuesday, the council will discuss a proposed change to city law that would authorize mail-in ballots for special elections to fill council vacancies. The estimated cost to mail ballots to registered voters in District 2 is $14,500 to $19,500. The Watsonville city clerk proposed the change.

District 2 residents will also be able to vote in person 8 a.m. to 5 p.m. Mondays through Fridays starting Nov. 8 at the city clerk’s office, 275 Main St., top floor, in Watsonville. Poll hours the week of the election will be:

Santa Cruz Local wants to hear your solutions to homelessness 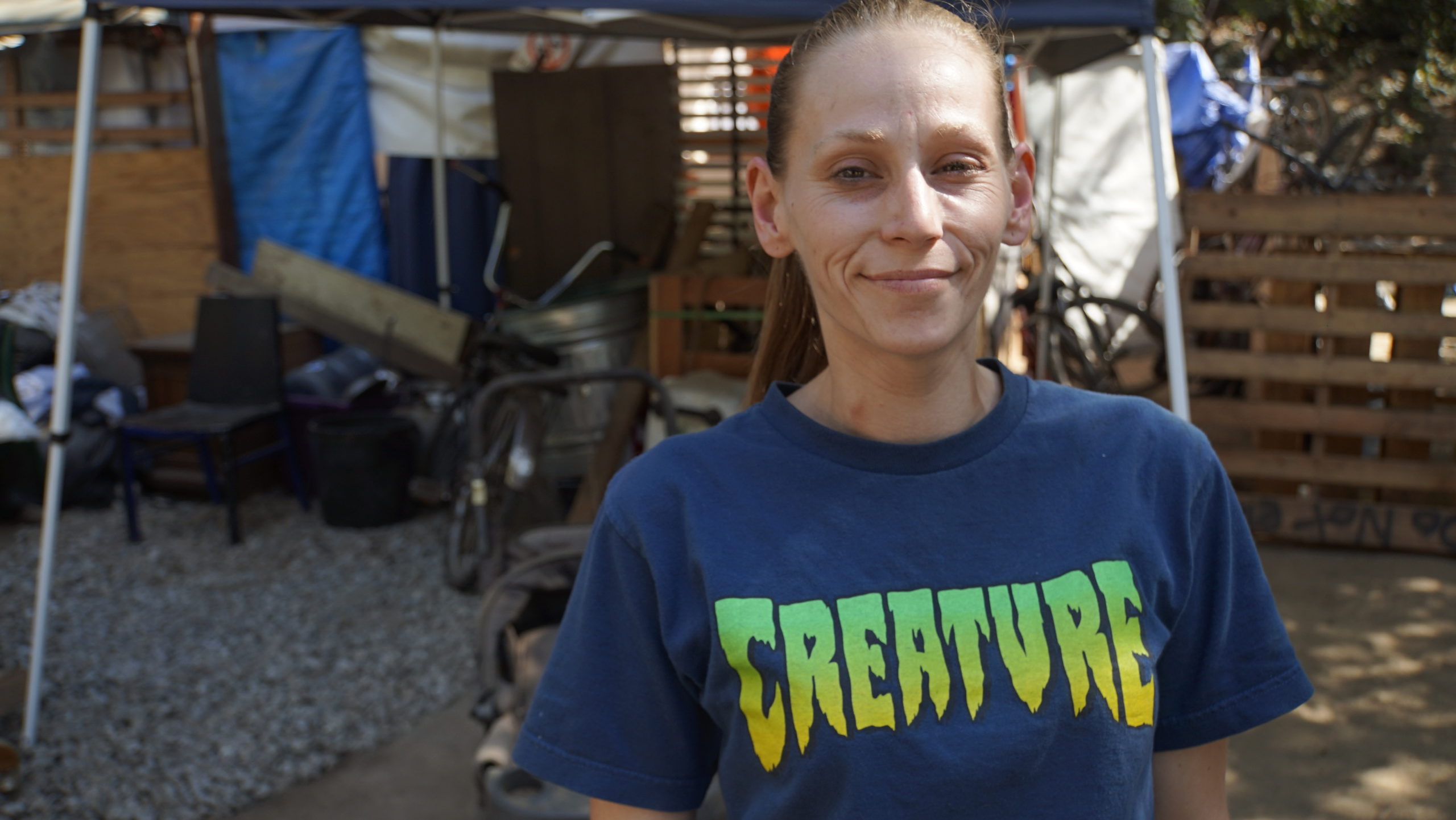 Brittany Shay, 28, wants to get back into sales. She last worked as a supervising sales manager at a cellphone store in Capitola Mall.

“Sales, that’s money. I like commission,” Shay said last week. “That was fun too. Just to be able to get any job, honestly.” Shay said.

Shay lives at “Camp Paradise,” a Santa Cruz homeless camp on the San Lorenzo River next to the Santa Cruz Memorial cemetery. She is one of dozens of homeless people Santa Cruz Local has interviewed in recent weeks as part of a community engagement phase of the project. The project investigates solutions to homelessness in Santa Cruz County.

Shay said she became homeless in Santa Cruz two years ago after her boyfriend had a mental health problem. “We lost our place. So I mean, I couldn’t afford housing anymore. I tried to go to the shelter, but they said they didn’t have a bed for me, that I wasn’t ‘priority,’” Shay said.

Shay said what would help her the most is a connection to a job and rent help. She said the state system stopped her unemployment payments in October 2020 and she needs help accessing those benefits.

When asked what she needed, she said she and others at the camp need survival gear as winter approaches. They need clean water, jackets and other warm clothes, bedding, food, feminine pads and tampons, socks, access to laundry machines and pet resources.

“It’s definitely politics. No one’s really in our corner,” Shay said. “The No. 1 thing is we don’t have a voice, somebody to speak for us. Somebody who’s knowledgeable about what we go through day to day.”

We want to hear from you. What information or resources do you need related to homelessness in Santa Cruz County? How are you impacted by homelessness?

Your feedback will help guide our reporting.

In a special meeting Wednesday, the Scotts Valley City Council is expected to vote on a new contract with San Jose-based hauler GreenWaste Recovery Inc. that would accommodate a state mandate to collect food waste in 2022.

Scotts Valley residents now pay $15 to $68 monthly for garbage, recycling and yard waste pickup. The new residential rates could be $17 to $77 monthly. The rates would increase each year according to the consumer price index.

The new contract would include:

Most of Scotts Valley’s recreation programs stopped in spring 2020 due to the coronavirus pandemic. Recently, city leaders hired the consultant firm Management Partners to create a plan to restore those services.

At 6 p.m. Wednesday, before the council meeting, the city council will hold a joint study session with the city parks and recreation commission to discuss the Management Partners’ report. The council is not expected to take formal action Wednesday.

Parts of 41st Avenue could be repaved and a sidewalk project on Kennedy Drive could move forward with regional grants, the Capitola City Council decided at its meeting on Thursday, Sept. 23.

Separately on Thursday, the council widened its search for a city planner.

The council also agreed to offer a $250 incentive for council members, planning commissioners and staff members who receive digital agenda packets rather than printed packets.

In-person help with applications will be available:

An online workshop on the application will be held 1 p.m. Tuesday Sept. 28 on Zoom.

Your responses to ‘What keeps you up at night?’

Last week we asked: What keeps you up at night?

Some of your responses:

“Knowing there is no 24/7 non-law enforcement mobile crisis response and that our Behavioral Health Services are a hodgepodge of siloed short term, programs rather than a health care system. Knowing that there is ongoing avoidable suffering and deaths being caused by this.” — Jeffrey Arlt

“That we are running out of water. Why are we pushing building so much when the current residents can’t make their water allowance? It seems incredibly insane and makes it hard to do the conservation when the city doesn’t seem to care/practice what they preach. ‘Can you let all your plants die and take short showers while I build an 80-unit apartment complex?’” —Karyn Goldstein

“The gradual decay of our local state parks. In particular Natural Bridges. This is not just due to homeless and RV parking along Delaware. Although that is the majority of the problem, it is also caused by our very own residents on the Westside that pay no heed to the park regulations and let their dogs wander on trails clearly marked no pets. We are losing the wildlife and beauty that make these parks so precious and unique. Each year I see fewer coyotes, rare birds and other wildlife and more and more trash and vandalism. —Glenn E. Seiler

Today’s question: What local shop or business do you feel nostalgic about? Share a memory.

We’ll share responses in one of our next newsletter issues.

Stephen and Kara dug through 1,607 pages of local government agendas on Friday to produce this newsletter for you.

We want you to know what’s coming up in local government meetings this week so you can get involved and influence these big decisions.