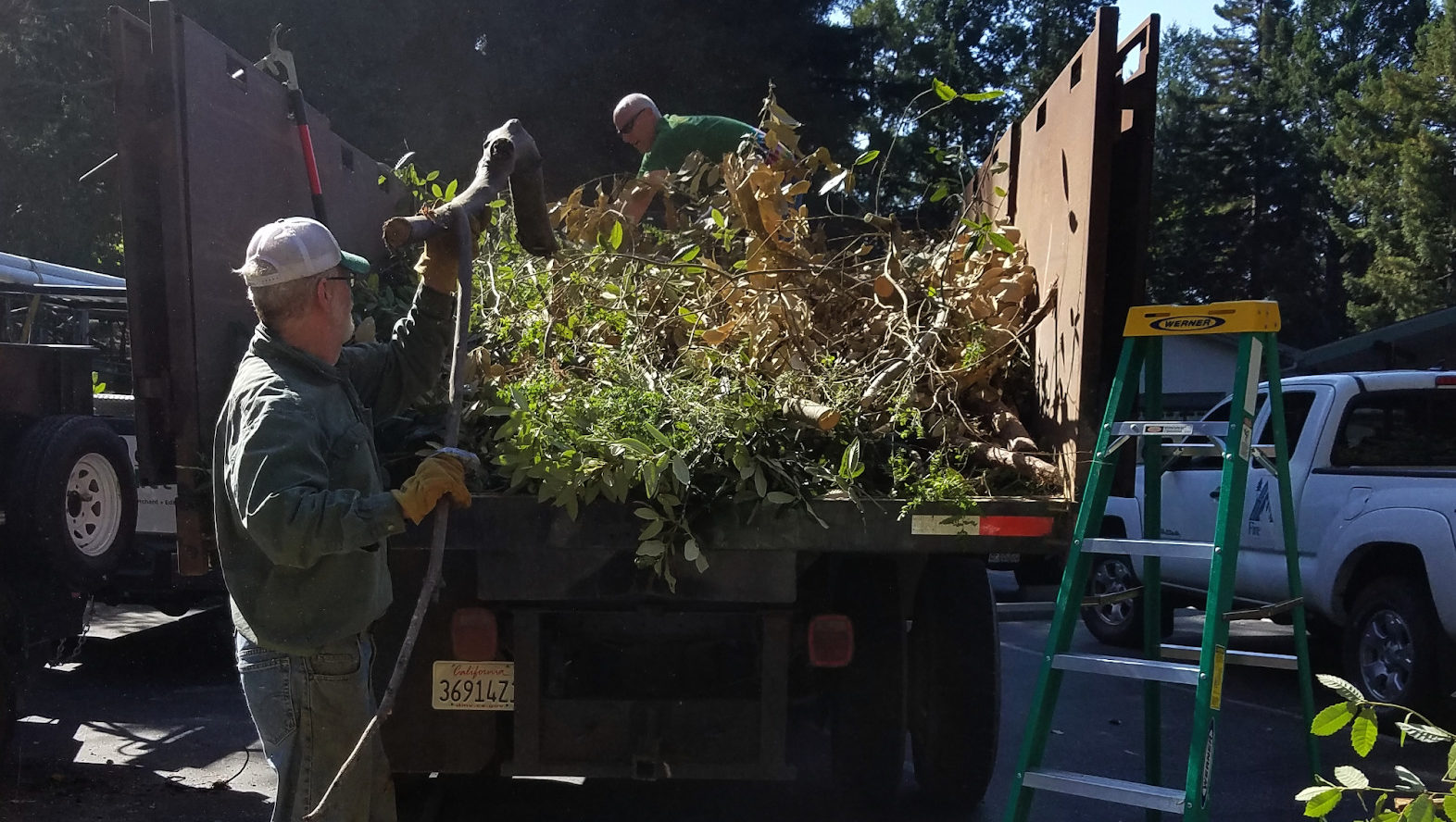 Tim Eagan, a member of the Bonny Doon Fire Safe Council, removes tree branches during a Fuel Reduction Day in 2019. This year, residents are renewing efforts to clear brush near roadsides and buildings in preparation for coming wildfires. (LizAnne Jensen — Contributed)

“When that fire happened, I did not know what to do,” she said. “I ran from room to room. We were completely unprepared.”

Thirteen years later, the CZU Lightning Complex Fire nearly claimed her home again. And yet during her most recent evacuation, she felt self-assured. She was ready with a bag of essential items and she even left a note so firefighters would know that she had left.

Her preparedness is due largely to her involvement with Firewise, a neighborhood program that readies residents for wildfire. Firewise is part of the National Fire Protection Association, and it recognizes a neighborhood’s efforts toward defending their community against wildfire. Although some groups in Santa Cruz County have been operating for years, the popularity of the program rose sharply after the destruction of the CZU megafire that started in August 2020.

“You alone can do everything in your power to harden your own home and defend your property,” said Firewise coordinator Lynn Sestak. “But if your neighbors haven’t done the same things, you’re still at great risk.”

Santa Cruz County has 13 certified Firewise neighborhoods with 10 to 370 homes each. With 16 more neighborhoods seeking certification, Jensen said the program is “going like gangbusters.”

In quarterly meetings, leaders from each neighborhood group meet to discuss their progress and swap strategies. The work ranges from providing free wood chipping and large trash bins to conducting door-to-door outreach to neighbors. “One neighborhood just raised money to bring goats into their community” to graze down a dangerous stretch of dry grass, said Jensen.

The neighborhoods also create plans for communication in case cellphone service becomes unavailable during an emergency. It identifies the elderly and disabled who might need assistance during an evacuation.

Jensen says preparations have become especially crucial as dry conditions predict another catastrophic fire season. “The fire risk is so extreme, and we have 100 years of fuel that’s accumulated in the forest.” While another fire may be unavoidable, she said home hardening and fuel reduction efforts can limit the number of embers that set houses aflame.

In 2019, Santa Cruz resident Abby Young successfully rallied a group of her neighbors in Prospect Heights to become a certified Firewise Neighborhood. The biggest task, she said, was manually removing the dry brush and grass in backyards and roadsides. That brush can fuel the spread of wildfire.

“We have to be on top of preventative maintenance all year long so we don’t have to deal with multiple huge emergencies,” Young said.

But unlike Fire Safe Councils in Santa Clara and San Mateo counties, the Santa Cruz County group operates entirely on a volunteer basis. Abby Young, who sits on the board of Fire Safe Santa Cruz, said the lack of paid staff limits what the group can accomplish. “Piecemeal with volunteer groups, things are getting done, but not on the scale we need,” Young said.

Young said she hopes that’s going to change. In the most recent Santa Cruz County budget, County Supervisor Manu Koenig helped secure a $50,000 grant for the council. Jensen says the grant will fund an administrator for the group and help expand outreach efforts. The council is also applying for a state grant of up to $175,000.

How to get involved

A list of Firesafe neighborhoods is on the council’s website. Residents can also attend online council board meetings. For more information on existing neighborhood groups or starting your own, email [email protected].

If county residents aren’t able to join a neighborhood group, Jensen recommended that they consult the council’s three-page fire preparedness document with guidance on hardening homes to fire and preparing for evacuation. Some of the most important steps, she said, are clearing flammable material 5 feet away from houses and readying an evacuation bag with essential items and protective clothing.

“If people do nothing else, they should go through this document,” said Jensen. “Print two copies and leave one on your refrigerator and one in the glovebox of your car.”

Editor’s note: This story has been updated to correct the spelling of Tim Eagan’s name.