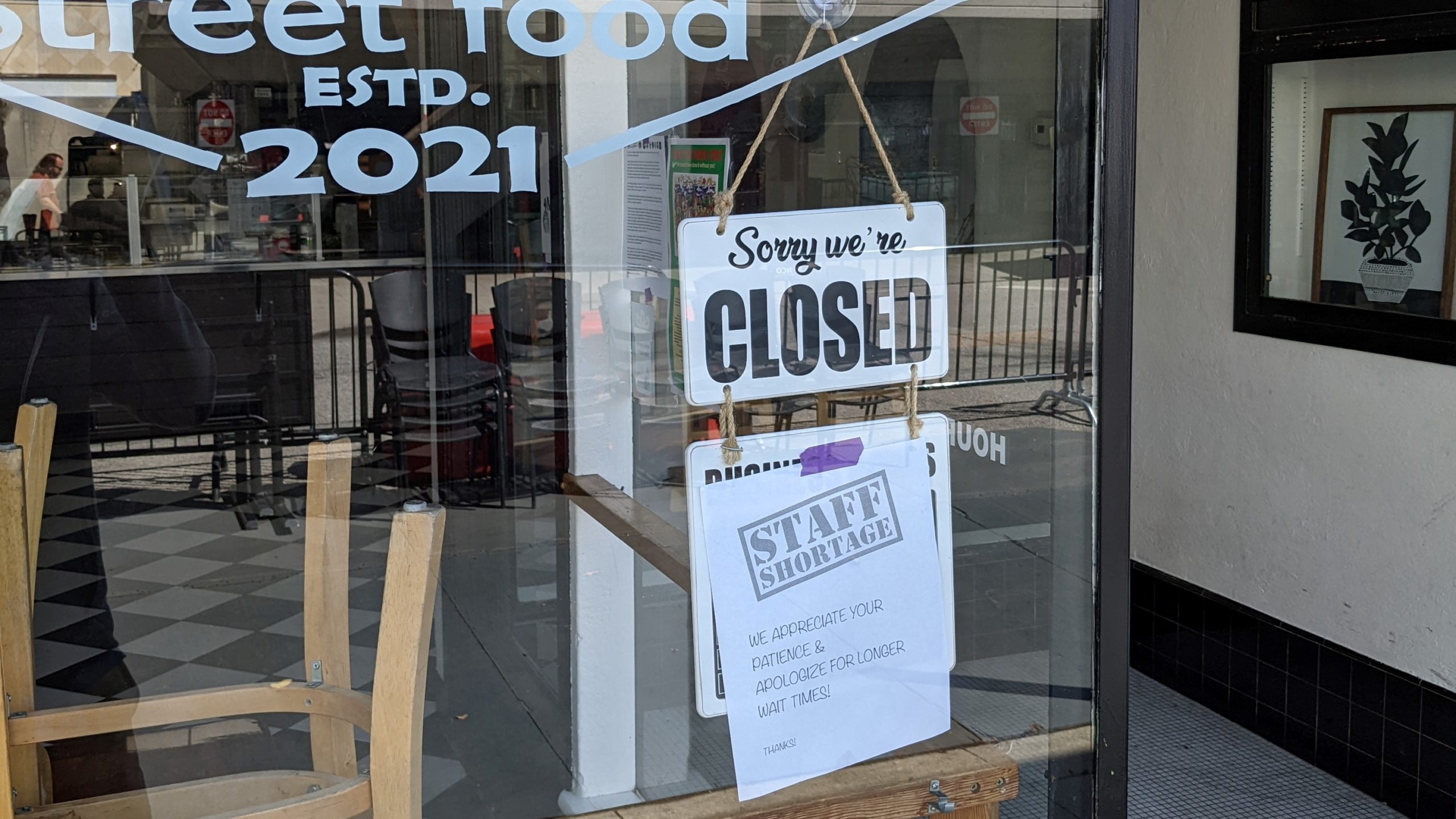 Arslans Turkish Street Food on Walnut Avenue in Santa Cruz was closed on an afternoon in March because of a lack of workers. (Stephen Baxter — Santa Cruz Local)

SANTA CRUZ >> Two economic reports released in May describe Santa Cruz County’s shrinking labor force, as well as some strategies for workers and employers to succeed in a high-cost area with a changing job market.

Wednesday, a State of the Workforce report and presentation was given to the County of Santa Cruz Workforce Development Board. The board advises the Santa Cruz County supervisors and brings business and government leaders together in part to find solutions to local workforce challenges.

“In San Luis Obispo County, Santa Barbara County and Santa Cruz County, we’re all in a similar situation. We have an aging population and less-educated individuals working in low-wage jobs,” Detlefs said.

Carlsbad-based BW Research Partnership Inc. wrote the 50-page State of the Workforce report, and its President and Principal Researcher Josh Williams led Wednesday’s presentation. “Before March 2020, the Santa Cruz County economy exhibited several positive economic indicators and trends. Unemployment was low, job quality had been improving, and several industry clusters with high average earnings had grown considerably,” according to the State of the Workforce report.

“While we have not been able to quantify the full extent of the economic impact of COVID-19 on Santa Cruz County, it is safe to say that issues like lowered labor participation and a decline in total jobs from the pandemic has hurt the county’s economic landscape and particularly lowered economic opportunities, especially for lower-income residents,” the workforce report stated.

Separately on May 20, a Monterey Bay Economic Partnership meeting included a presentation  on economic trends in Santa Cruz and Monterey counties. Christopher Thornberg, founding partner of Los Angeles-based Beacon Economics, presented the roughly 60-minute report. It examined the national economic recovery and zoomed in on some trends in Santa Cruz County.

The two reports overlapped in several of their findings: 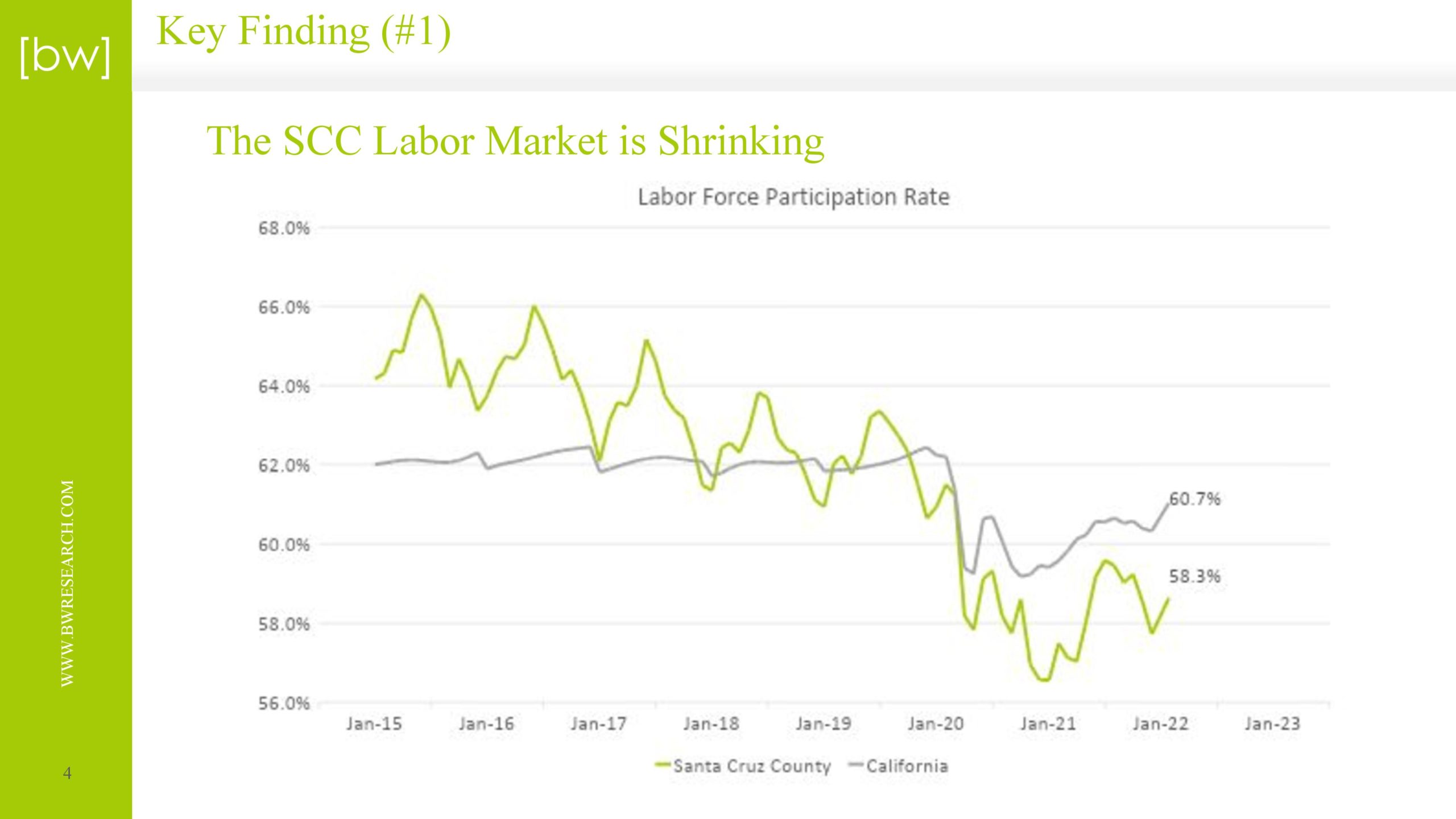 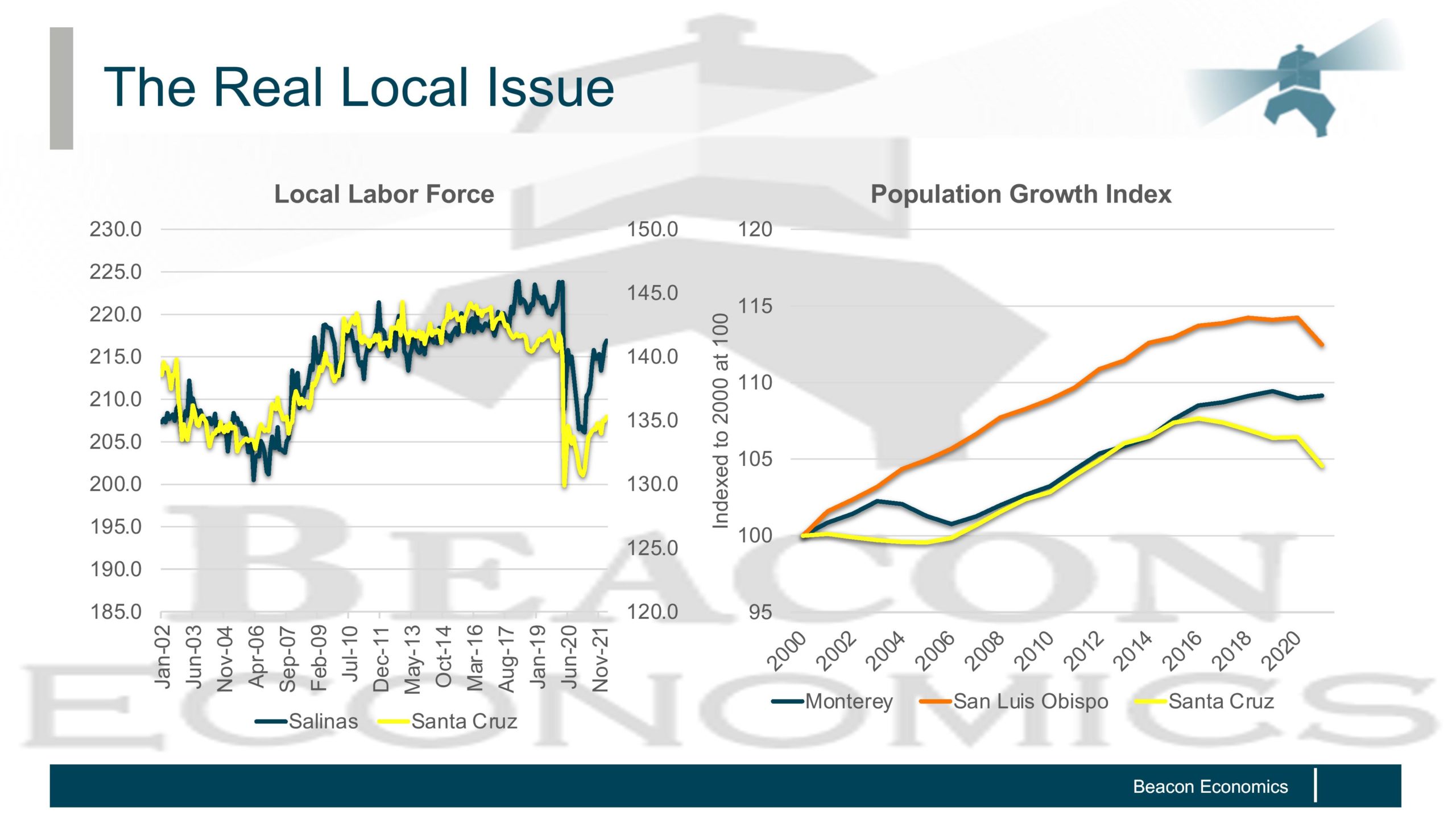 Labor participation has not fully rebounded in Santa Cruz County since the start of the pandemic. The county’s population growth, at right, has trended down since about 2016. (Beacon Economics) 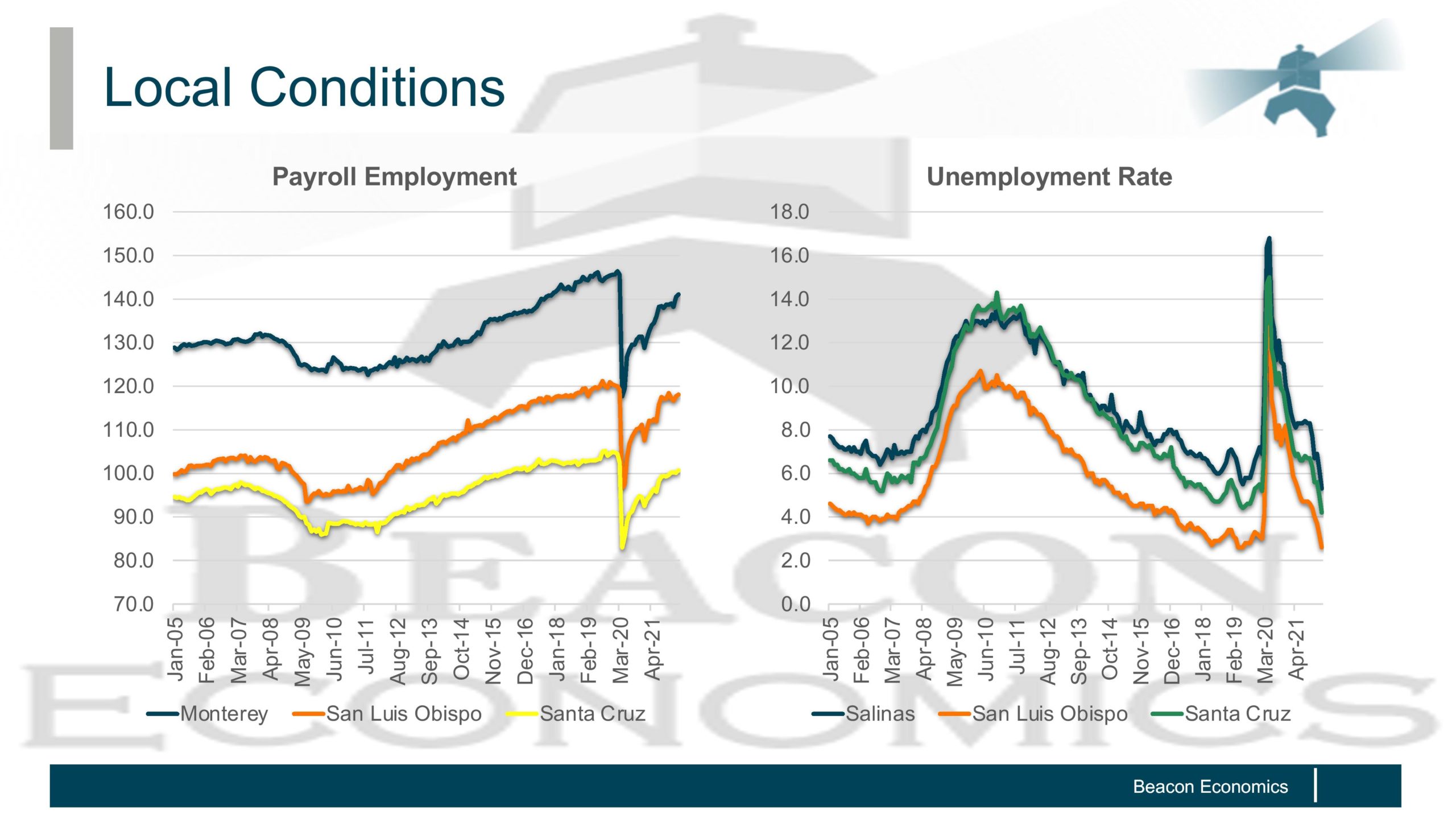 The reports also offered some suggestions:

Detlefts said the Workforce Development Board asked that the State of Workforce report have a section on health care trends. About 14% of jobs in Santa Cruz County are in health care, and health care employment grew more than 26% from 2010 to 2020, according to the report.

There has been high turnover in health care nationally since the pandemic started, said Nate Hunt, a project manager at GW Research Partnership, during Wednesday’s presentation.

“National surveys show that about 18% of workers who were working in health care before the pandemic ended up quitting at some point during the pandemic, and 12% were laid off,” Hunt said. “A lot of those folks came back, but still, the fact that some residual amount did not come back still leads to the gaps that we’re seeing now. And those gaps — those kinds of shortages of workers — are going to be hard to replace.”

Some chief reasons that health care workers left their jobs were because of the pandemic, a lack of money, opportunities or career growth, or feeling “burned out or overworked,” according to the State of the Workforce report. 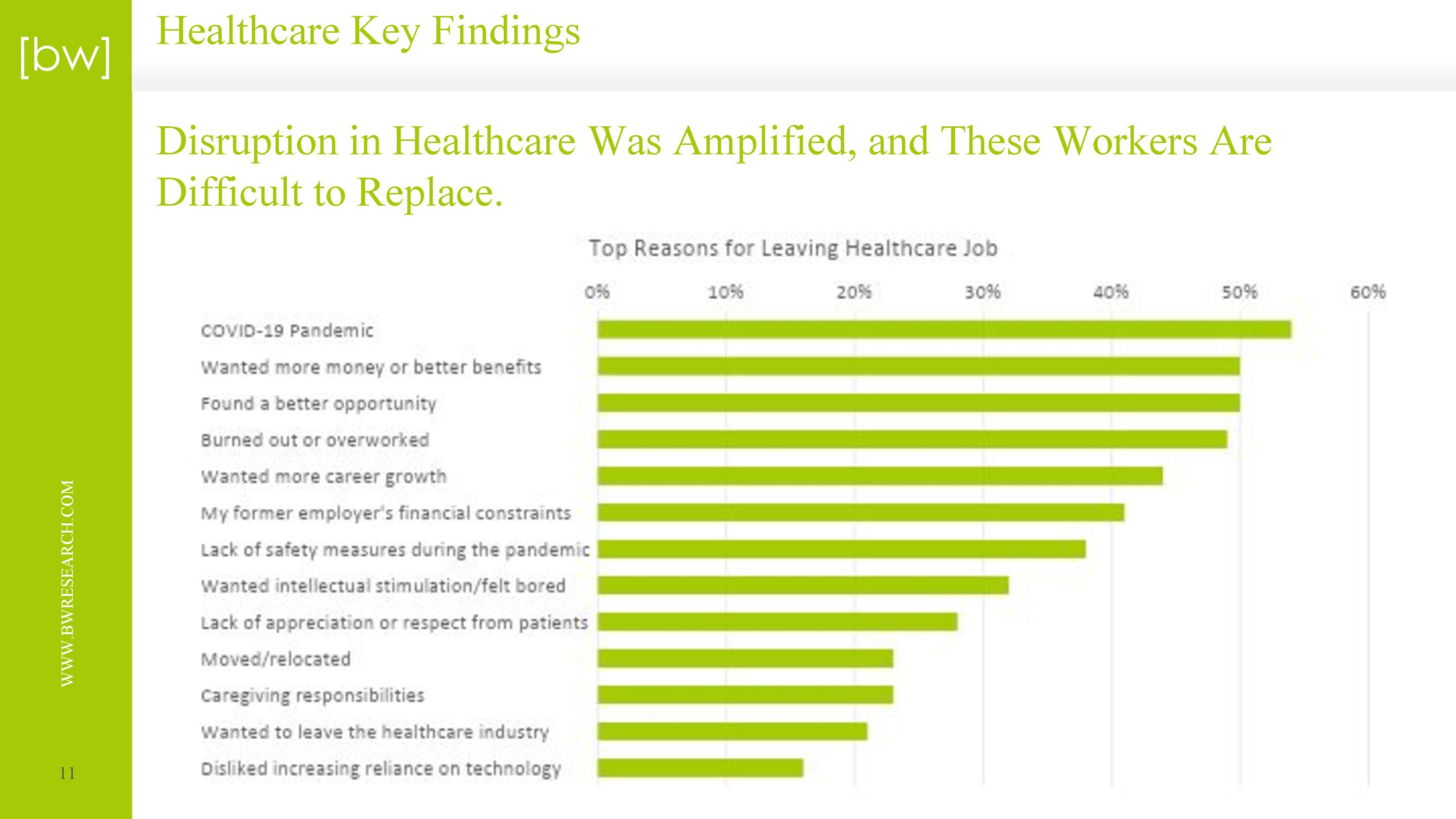 A survey suggests that health care workers left their jobs during the pandemic for many reasons. (GW Research Partnership)