SANTA CRUZ >> The Santa Cruz City Council voted 5-2 to advance broader limits than previously considered for where and when homeless people can camp in the city.

If city-sanctioned or private shelter beds are available, camping essentially would not be allowed on public property unless city leaders give permission for that site. The proposal aims to deter large, unmanaged homeless camps.

City staff must wait for applications from storage and safe sleeping site operators before the policy can take effect. The proposed law is expected to be voted on in a second reading in the coming weeks. City leaders seek public input by email to [email protected]. 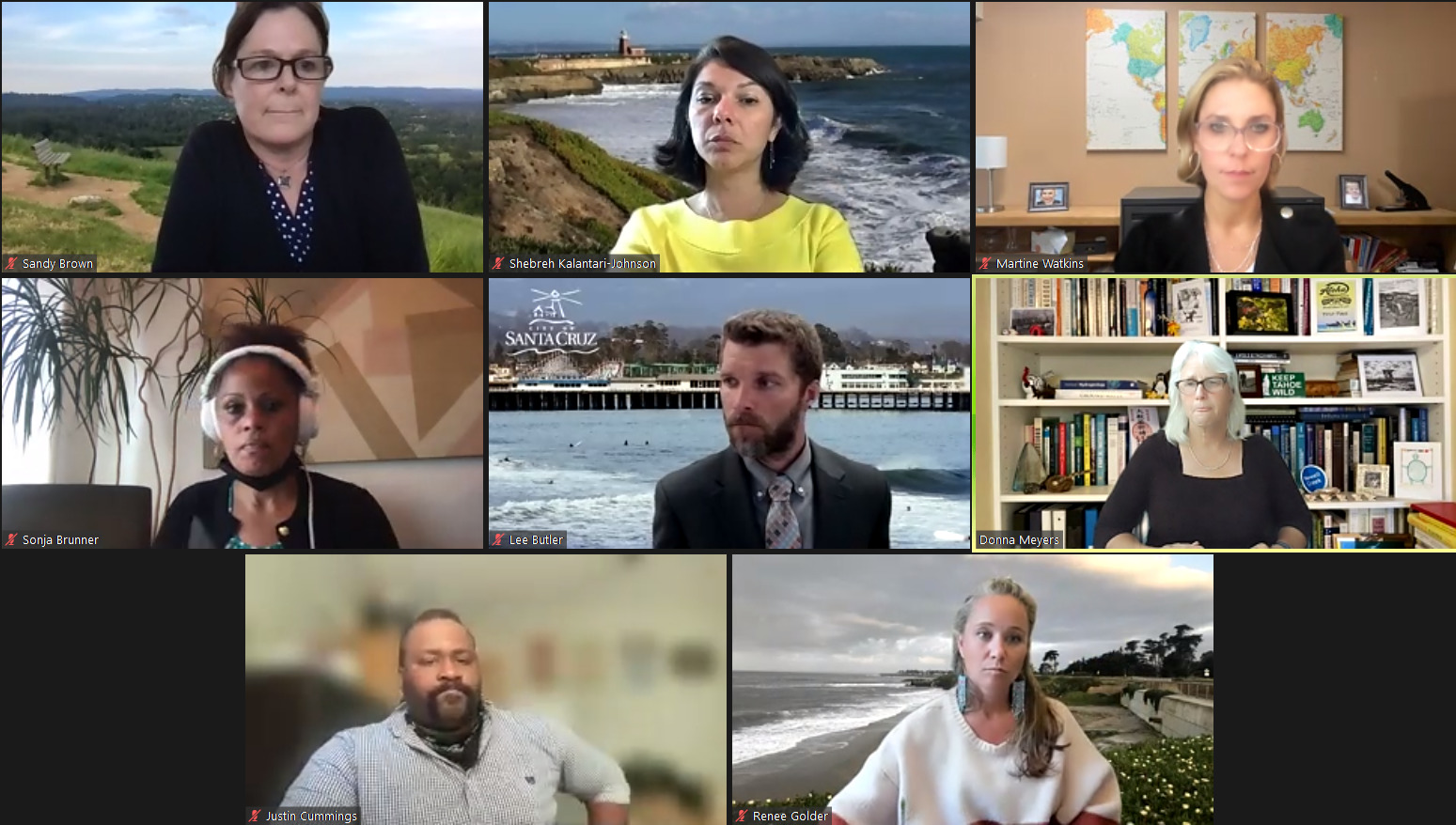 Mayor Meyers said Gov. Newsom’s announcement Tuesday of nearly $50 million available to local governments to move people from homeless camps to housing was “a signal” that the city’s proposed law was aligned with state funding opportunities. Meyers and other council members said that the city needed a law in place to address homeless camps to compete for state grants.

“We need to be ready as a community. I’m tired of talking and not doing anything,” Meyers said. “We’ve got to get assistance for the people who need it here in this community. I’m done talking about it.”

Brown and Cummings said they wanted the safe sleeping and storage programs, but they wanted more public hearings to engage residents. The proposed law was published on the city’s website late last week and did not give enough time for many residents to digest it, Cummings said.

“I just keep recommending that we have this opportunity to have further engagement with the community, because that’s what the community is asking us for,” Cummings said. “It would go a long way to rebuild trust and let them know that we are trying to hear them out.”

Vice Mayor Brunner also pushed for more meetings to get input on the policy in part because it would not start until storage and sleeping sites are available.

No one who identified themselves as homeless spoke during Tuesday afternoon’s council meeting, which stretched for nearly nine hours and took place online only.

Councilmember Brown expressed concern that city staff did not yet have a clear plan to identify if shelter was available, which would trigger the night camping ban. Santa Cruz Planning and Homelessness Response Director Lee Butler said Tuesday that a possible idea is development of a mobile app to show in real time which shelter sites have availability, but staff “haven’t gotten to the point where we’re making that a reality.”

Brown said she was hopeful, but not convinced, that the app could be created.

“Given that we have never been able to figure this out before, it’s hard to imagine that all of a sudden we’re going to figure it out and make it happen in this short amount of time,” Brown said. “So I think we really do need a clear understanding of what we can actually do — what the city can do, what operators can do — before we say we’re going to do this. Otherwise we’re really kind of misleading the public.”

Nearly every council member acknowledged that the 150 safe sleeping, shelter or managed camp spots that the proposed law would create would not be enough to meet the need.

The most recent homelessness point-in-time count from 2019 identified nearly 1,200 homeless people in the City of Santa Cruz, 865 of whom were unsheltered.

During the COVID-19 pandemic, the number of shelter beds offered by the County of Santa Cruz has peaked due to new COVID-related state and federal funding. More than 800 shelter beds are filled daily countywide, county spokesman Jason Hoppin said Tuesday.

“We are at an all-time high for shelter capacity,” Hoppin said.

Beds do come open, but there’s a wait list of about another 800 people, he said. County staff prioritize open beds for older people and others medically at risk for severe COVID, Hoppin said. 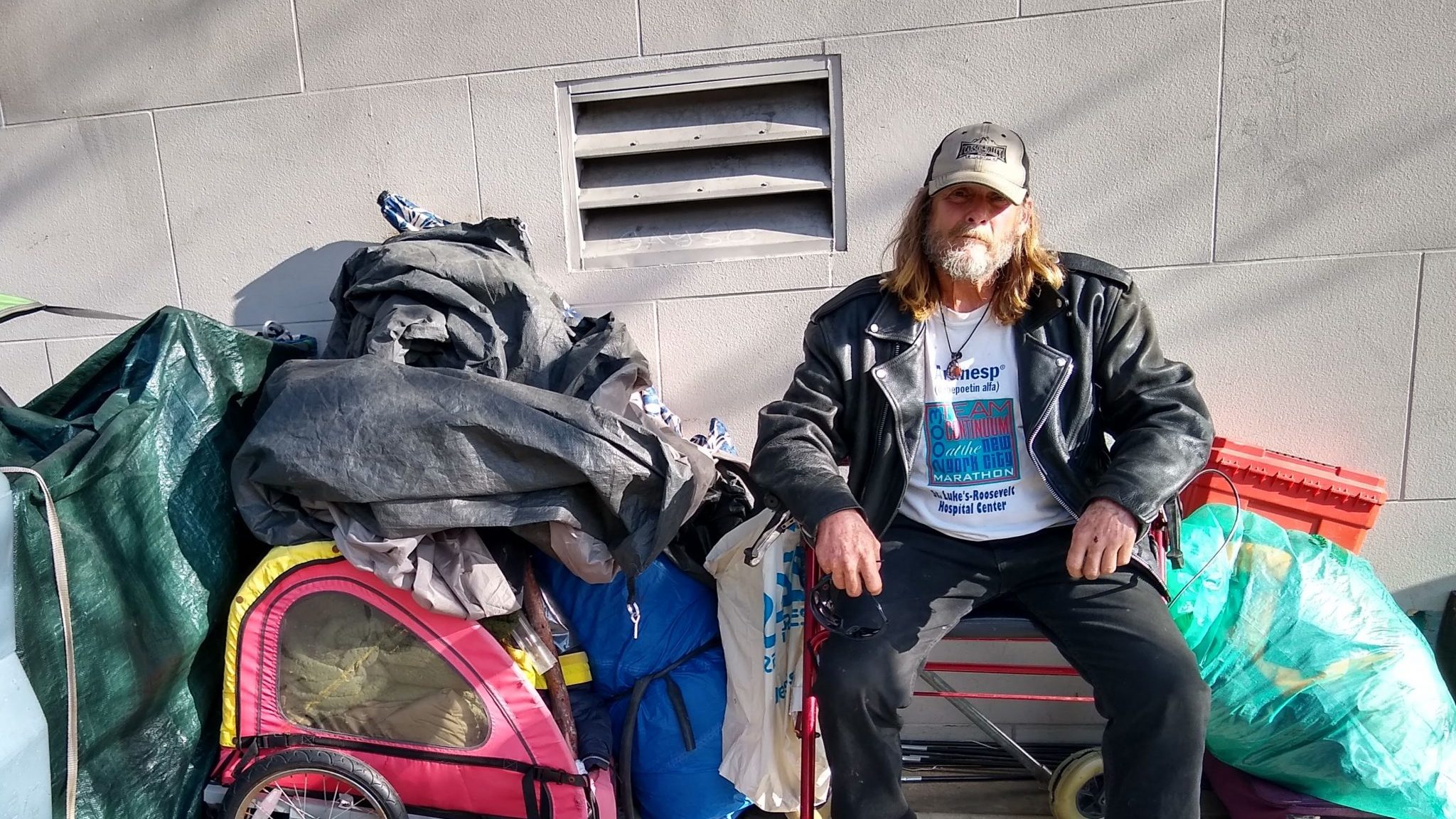 Gary, 63, said he would go to a shelter if it accepted his belongings. He camped near the post office in downtown Santa Cruz in 2020. (Stephen Baxter — Santa Cruz Local file)

For decades, city leaders have struggled to manage unsanctioned homeless camps along the San Lorenzo River. When city officials close one camp, another typically starts.

For the past several months, city leaders have tried to work with Caltrans and county officials to relocate a large homeless camp at Highways 1 and 9 in Santa Cruz. Several dozen people have camped mostly along the highway shoulders, on Caltrans property.

In negotiations, city leaders have asked Caltrans officials to provide a place to relocate the homeless campers. Tuesday, a Caltrans spokesman did not answer whether Caltrans found an alternate place.

“We will continue to work with the city and county of Santa Cruz to move people into safer situations as available,” the spokesman wrote.

An order from a federal judge temporarily prevents city officials from clearing the camp. A court hearing is scheduled for 10 a.m. Thursday.

Tuesday, the city council unanimously voted to advance a plan to transition to district elections by the November 2022 election.

The Santa Cruz City Council has seven members who represent the entire city. Council members’ terms end at different times, so choosing which district votes first could be contentious.

Watsonville City Council has had district elections for many years. Santa Cruz City Schools recently changed to district elections after a similar threat of a lawsuit. Cities and counties across the state have faced similar legal threats and have begun to shift.