Editor’s note: This story has been updated to include a response from Coastal Commission staff.

SANTA CRUZ >> A plan aimed to address coastal erosion along West Cliff Drive was unanimously approved by the Santa Cruz City Council on Tuesday, which for the first time creates a long-term vision for protection and repairs of the roadside cliffs. It also sets up a potential plan for one-way traffic on West Cliff Drive with a lane set aside for cyclists.

The West Cliff Drive Adaptation and Management Plan will guide access, parking, recreation, cliff protection and other public works projects along West Cliff Drive for the next 15 years. The iconic strip and its coastal trail are a tourist destination and a major conduit for car traffic for the Lower Westside.

The plan also calls for an “improved status quo” to adapt to sea-level rise in the short term. That includes:

A “potential next step,” according to the plan, is the reduction of traffic from two-way to one-way.

For decades, the California Coastal Commission has pushed the city to develop a West Cliff Drive management plan. In the past, Coastal Commission staff have criticized city leaders for having a reactive, rather than proactive, approach to repair damage to the road and cliffs caused by large waves.

The next step for the plan is consideration and approval by the California Coastal Commission.

Tiffany Wise-West, the city’s sustainability and climate action manager, said Tuesday that a conversion to one-way traffic would require a longer plan and design process that she expects to begin soon. The plan approved Tuesday does not include detailed project plans for that conversion, she said.

“In converting to a one-way, we would really need to look at traffic calming, partial closures and other holistic tools with almost every street in the Lower Westside. That would involve direct engagement with all of those neighbors and neighborhoods,” said Gallogly. “And as we know, when you do these projects, there are winners and losers. And it would take a lot of dedicated staff time and work on that. I’d also anticipate that it would take an iterative design process and a significant amount of budget just to move forward to consensus on that project — if we could get to consensus, which I think is a lofty aspiration for this project.”

This week, the council received about 60 letters from residents who called for council to direct the city’s Transportation and Public Works Commission to discuss a more immediate adoption of one-way traffic. The city council decided not to send that issue back to the commission.

Also, in a survey this past fall, the city staff heard concerns about a longer-term plan to reroute traffic inland if a disaster forced permanent closure of West Cliff Drive. That plan included options to reroute traffic onto Pelton Avenue and Monterey Street.

Those longer-term rerouting plans were not included in the plan that was approved Tuesday.

Recommendations of the plan included:

The plan also lists possible financing strategies for changes to West Cliff Drive. It is unlikely that state and funding would completely cover the costs, according to the plan. Options include:

The plan’s development has been guided since 2019 by an initiative known as Resilient Coast Santa Cruz, led by city staff and a 17-member advisory committee. The initiative has been funded in part by a California Coastal Commission grant.

Ryan Moroney, the California Coastal Commission Central Coast district supervisor, said in a December interview that collaboration with city staff in the past year was positive. He said the city’s public outreach was “robust.”

Moroney said, “It’s turned out really great from our perspective, and it’s heading down a great path.”

Coastal Commission staff were not ready to comment specifically, “but we definitely support the city in its efforts to address the challenges facing West Cliff Drive, and will continue to do so as the proposal makes its way through the Commission process,” Schwartz wrote in an email to Santa Cruz Local.

Regarding the potential conversion to one-way traffic, Schwartz wrote, “In general, the alternatives and proposals identified in the plan can be appropriate sea-level-rise adaptation methods to be considered.”

Regarding the plan’s preference for curved sea walls rather than new rip rap, Schwartz wrote, “We are always looking to find the least environmentally damaging feasible alternative for protection under the law, and as a general rule that has meant trying to limit beach and shoreline coverage. At the same time, there can be times when armoring is required under that and a wider footprint might actually be less environmentally damaging. For example, some nature-based solutions that might include underlying armor and overlaying that with sand to allow for recreation on a beach. In any individual case, it really depends on the facts and the circumstances.”

There are 18 vacant storefronts on Pacific Avenue and 37 across downtown Santa Cruz, city staff said Tuesday. Most vacancies have occurred since the start of the pandemic. 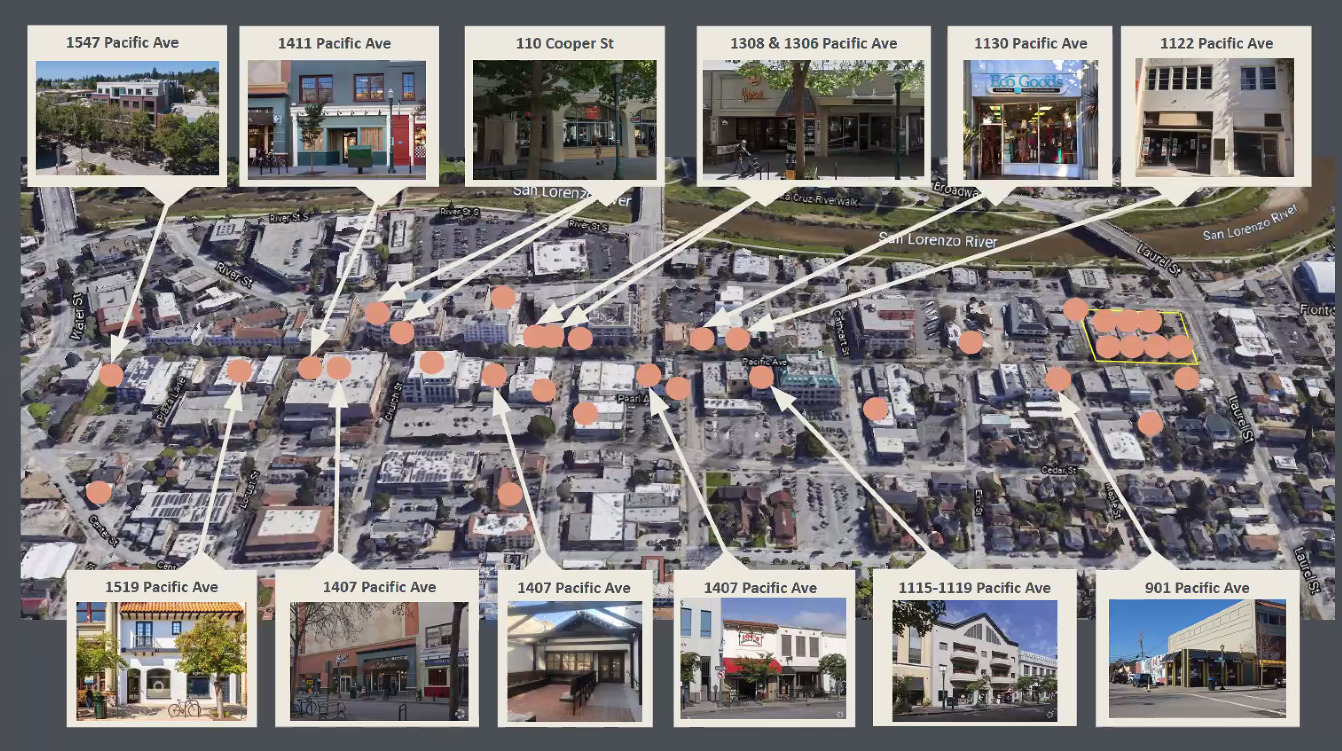 Key parts of the plan:

The council also supported Councilmember Martine Watkins’ request for city staff to look into the use of vacant spaces for child care.

Jorian Wilkins, the executive director of the Downtown Association of Santa Cruz, thanked the council during public comment for considering the plan.

Other actions by the council on Tuesday included: