SANTA CRUZ >> Santa Cruz County transportation leaders deadlocked Thursday on a vote about a potential passenger train on the county’s rail corridor. The tie showed a shift in political will against the project and signaled a pause on the plan.

The Santa Cruz County Regional Transportation Commission voted 6-6 on whether to approve a business plan for passenger rail and direct commission staff to seek $17.1 million in state money for environmental review and preliminary engineering work. The vote came after more than three hours of discussion and public comment. A tied vote means the plan was not approved, and the item will be discussed again at the commission’s May 6 meeting.

McPherson, Mulhearn and Petersen had voted differently in February — in favor of passenger rail. That previous vote did not ensure that a commuter train or light rail system would be built, but it enabled the staff to present the business plan Thursday.

It is unlikely the balance will shift at the next vote in May unless new information is presented. The commission’s discussion will likely focus on a symbolic decision: whether to approve the entire business plan or just the parts that fulfill a $100,000 Caltrans grant requirement. The commission deadlocked again in two 6-6 votes on that topic Thursday.

Either way, it is unlikely there will be enough votes to direct staff to seek funding to advance the plan.

After the vote to advance the plan failed, Guy Preston, executive director of the Santa Cruz County Regional Transportation Commission, explained the options.

“If there is no action desired by the board, we can just accept this plan, put it on the shelf, and decide what we want to do with the corridor at another time,” Preston said.

McPherson, who represents county supervisor District 5, which includes the San Lorenzo Valley and parts of Santa Cruz, questioned the financial feasibility of passenger rail as well as a “myriad of legal and physical challenges.” McPherson said he would continue to support the planned improvements to the rail north of the San Lorenzo River Railroad Bridge to Davenport, as well as freight service to Watsonville as long as it is financially feasible.

“But the part of the rail corridor between Lee Road [in Watsonville] and the San Lorenzo bridge to the north has serious obstacles and costs associated with moving forward blindly,” McPherson said.

McPherson added that he’s open to new information “or a new set of more feasible circumstances” regarding use of the rail corridor.

“I encourage more dialogue regarding what is the best way to preserve the public transit option and build a usable trail sooner than later between Lee Road and the San Lorenzo bridge,” McPherson said.

The Santa Cruz County Regional Transportation Commission deadlocked in a 6-6 vote Thursday on a plan for passenger rail. (Zoom screenshot)

Mulhearn serves as an alternate on the commission for Santa Cruz County Supervisor Zach Friend. Friend represents District 2 and has recused himself because he lives close to the rail line. The district includes Aptos, Seacliff, La Selva Beach and part of Capitola. Mulhearn has expressed skepticism of the passenger rail plan.

“My real issue is the opportunity cost of pursuing rail,” Mulhearn said Thursday. “It means that we’re not talking about other things that we could be implementing right now with money that we already have.”

He called for a dedicated bus lane on Soquel Avenue.

“The importance of building a bus rapid transit project where people actually are is that people need to get to work. They need to get to school. They need to handle all of their business somehow outside of a single-occupancy vehicle by using the existing transit network that we have,” Mulhearn said. “And maybe investing in it somehow or fostering and in promoting more development in our bus transit rather than talking about trains, we could feasibly accomplish our environmental, our equity and our economic goals in the short term, not 25 years from now.”

The project could be light rail or commuter rail powered by electricity, hydrogen fuel cells or other technology, according to the business plan. Several stops and stations have been planned, including in downtown Watsonville and south of Pajaro with connections to  Monterey County. 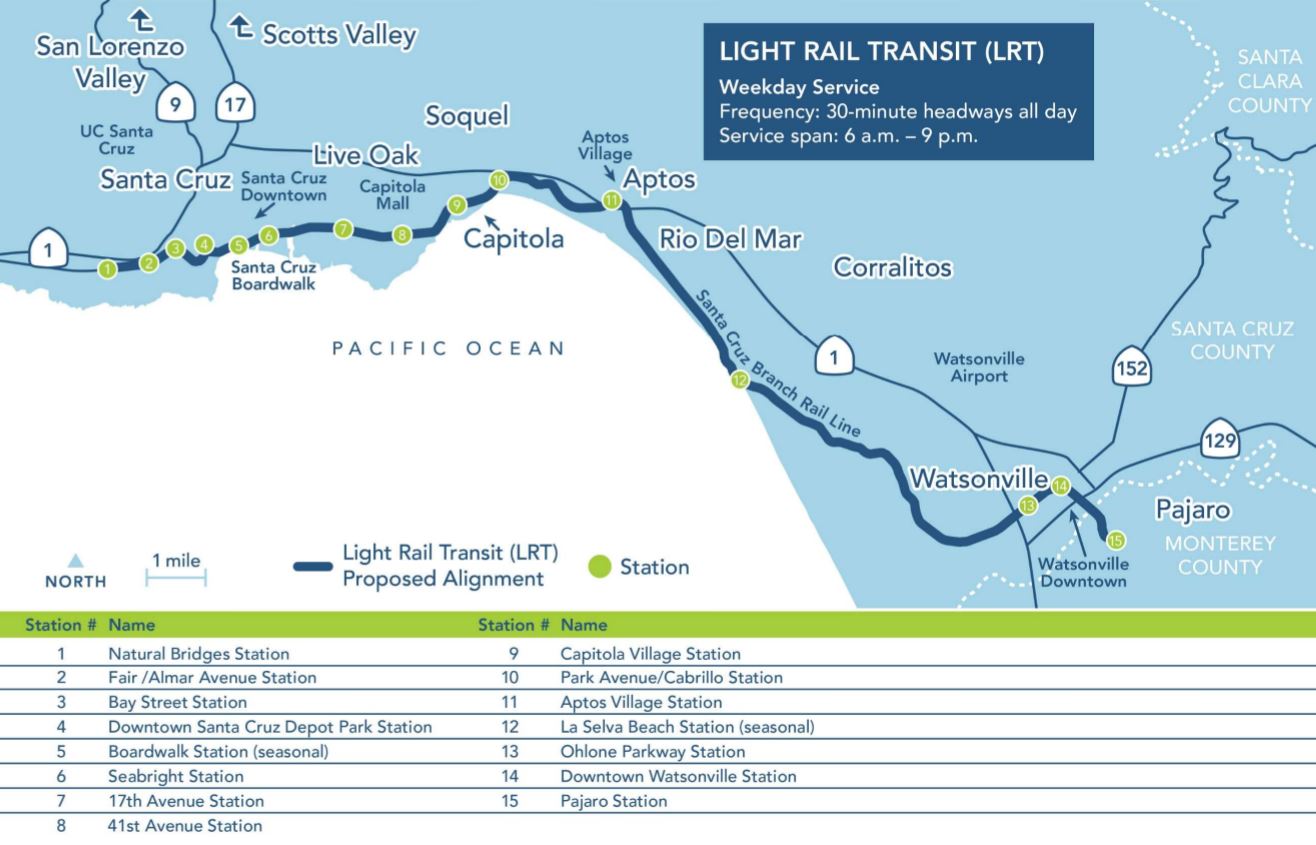 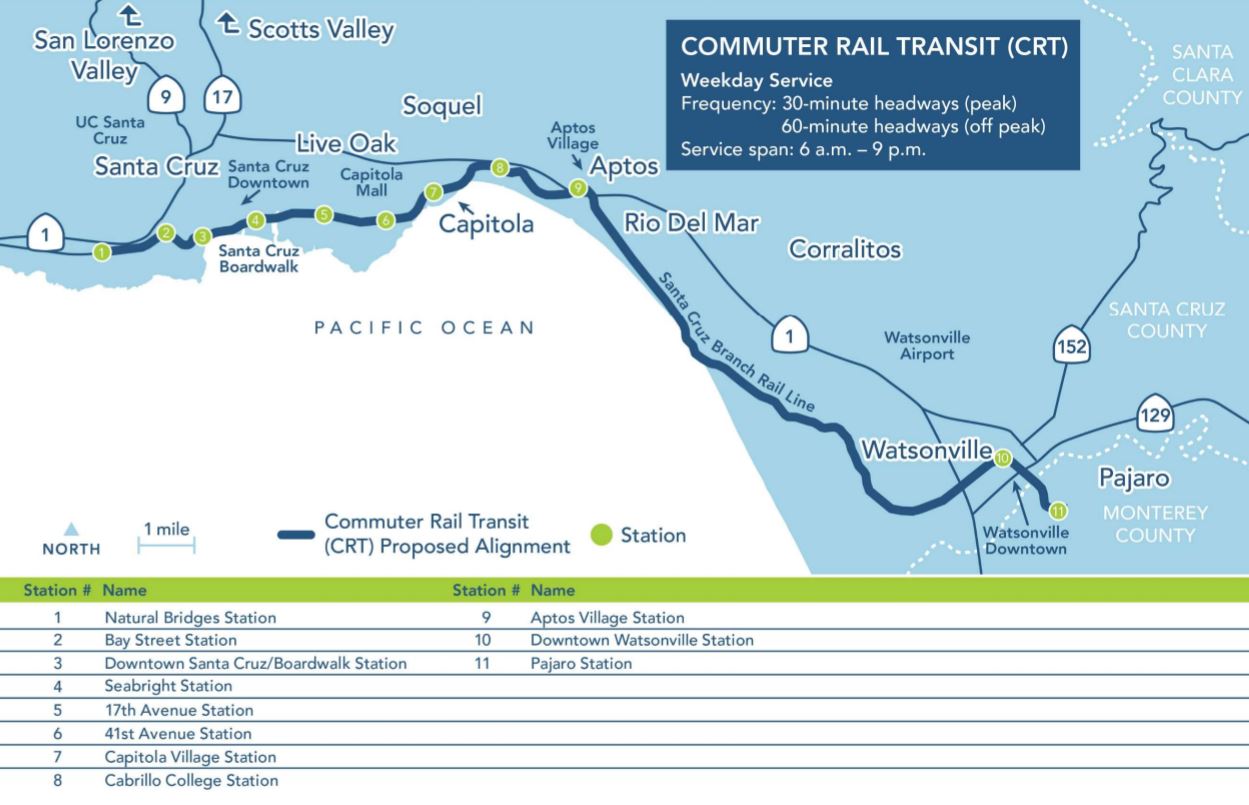 More than 300 county residents have sent emails to the commission in the last week, and about 40 residents spoke during public comment Thursday.

Watsonville residents are among the county residents most affected by Highway 1 traffic.

Judy Gittelsohn was one of eight public commenters on the rail business plan this week who said they lived in Watsonville. Gittelsohn is an artist who has taught students with special needs.

“For the special-needs population, the passenger rail in our area would be awesome for commuting safely and for pleasure,” Gittelsohn said. “I urge you to follow staff recommendations, accept the business plan and seek state and federal money for the next steps and keep maintaining the tracks.”

Others were skeptical. Steven Woodside, a Capitola resident and retired public lawyer who worked on a passenger rail project in Sonoma County, said he was once in favor of Santa Cruz County’s passenger rail plan but now strongly opposes it. “I think the idea of others funding this is simply unreasonable,” Woodside said.

The population base of Santa Cruz County “simply won’t compete” for state and federal funding with larger counties in the greater Bay Area, Woodside said.

In other news, the commission voted 7-5 to approve a request by newly-elected Supervisor Manu Koenig to remove two bicycle advisory committee members who represent his district but do not align with his pro-trail, anti-passenger rail views for Santa Cruz County’s rail corridor.

Some commissioners who opposed the removal said it was unprecedented to remove committee volunteers before the end of their term due to political differences. Schiffrin said he was opposed because it was against the commission’s bylaws. Committee members are nominated, not appointed, by commissioners and their approval requires a commission vote.

Koenig said that his election showed that voters wanted new representation across District 1.

The commission unanimously approved a separate motion made by Schiffrin to have the budget and personnel committee consider a change to the rules for committee appointments.

Editor’s note: This story has been updated to correct Bruce McPherson’s place of residence.