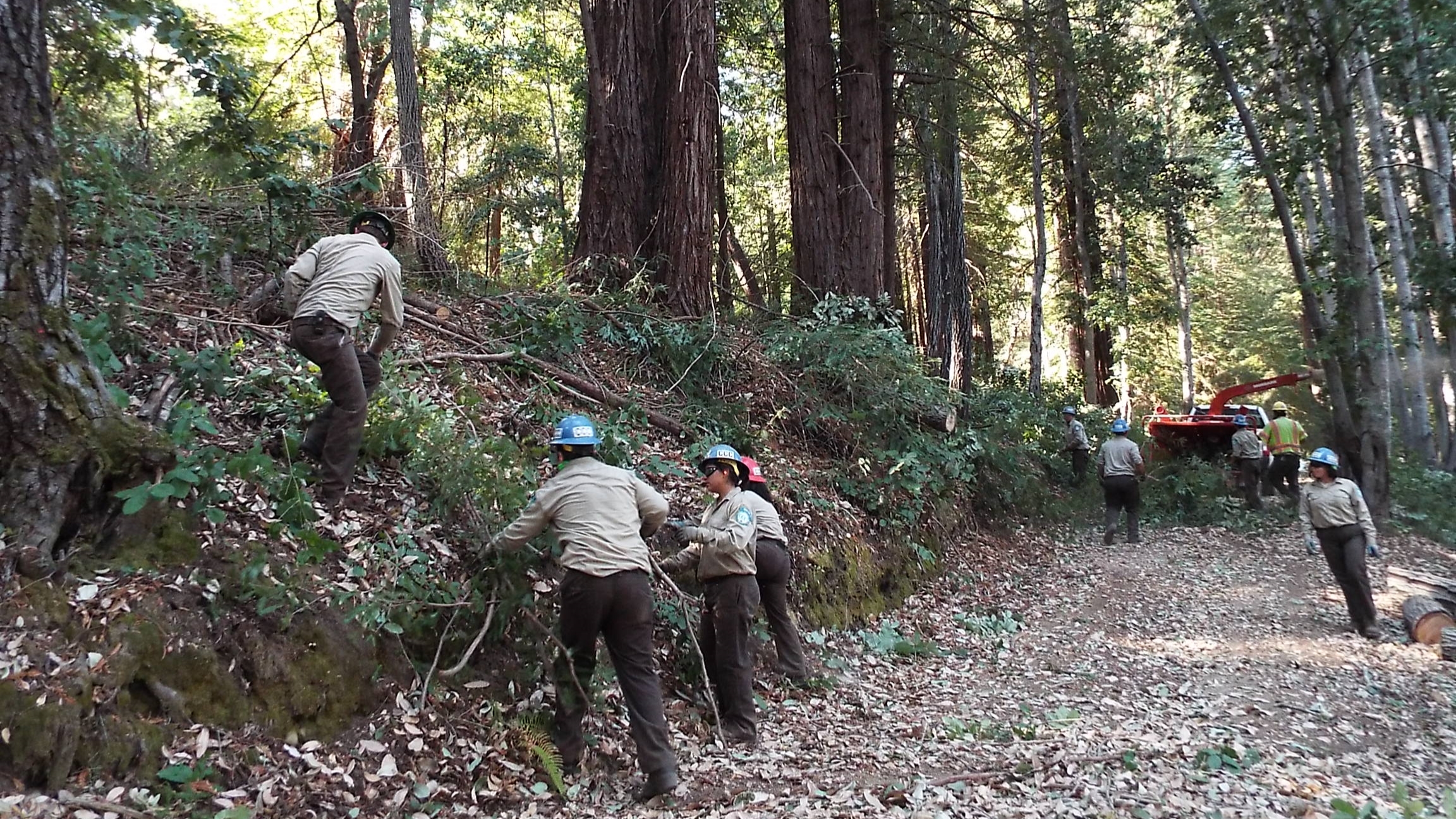 The civil grand jury is a group of volunteer residents that investigates public agencies, creates reports and makes recommendations to local government leaders. In June, the civil grand jury published a 33-page report called “Reducing our community’s risk from wildfire.” It asked Santa Cruz County supervisors by September to choose a lead agency to produce a countywide strategic investment plan to reduce wildfire risk. The plan would include forest management along wildfire escape routes around the county.

By December, the civil grand jury said it wanted county supervisors to allocate money toward implementation of the county strategic plan. The report comes in the wake of the CZU Lightning Complex Fire in 2020. It destroyed more than 900 homes and was the most destructive in the county in more than a century.

“Preventing future wildfires from seriously damaging our forest communities will require a major reduction of hazardous vegetation,” the report states. “We must prioritize vegetation reduction to protect residences, utility infrastructure, access and egress routes and critical buildings such as schools and hospitals.”

The highest priority areas for vegetation reduction are near public infrastructure, homes, roads and natural resources.

“The grand jury determined that vegetation reduction along roadways is a major problem that the county must lead in solving,” the report states. We wanted to understand what is really needed to protect our community from future wildfires, who is responsible for achieving it, and the county’s role in ensuring this work gets done.”

Many wildfire evacuation routes need maintenance and one-lane roads in the county are overgrown with flammable brush, the report states. Overgrown trees and other vegetation can slow fire engines and other emergency vehicles to get to fires — especially while residents flee.

The civil grand jury report suggests that many of these dangerous zones should be turned into shaded fuel breaks. Shaded fuel breaks decrease the chance of fire sweeping through and also lower the heat of the fire, authorities have said.

Cal Fire and State Parks have built shaded fuel breaks in recent years in places such as Graham Hill Road and in Soquel Demonstration State Forest. The civil grand jury report also commended the Resource Conservation District of Santa Cruz County for its work on vegetation management. The County of Santa Cruz’s Office of Response, Recovery and Resilience also has worked on a plan that deals with vegetation management on evacuation routes, authorities said recently.

Making homes defensible against fire is normally the property owner’s responsibility. Since the CZU Fire in 2020, there has been increased interest between homeowners and agencies to ensure home hardening tactics in cooperation with each other.

The civil grand jury report cautions that home hardening does not save every structure because there are often not enough firefighters to save every home in a large fire. However, having defensible space and other home precautions can aid firefighters and help prevent fire damage and spread.

Each civil grand jury report requires responses from the public agencies that it investigates. The Santa Cruz County Board of Supervisors are supposed to respond to this report’s findings by Sept. 22.

Friday, County of Santa Cruz spokesman Jason Hoppin said that leaders from the county’s Office of Response, Recovery and Resilience “recognized that we need to coordinate fuel reduction countywide.”

County leaders have secured grant money to hire a wildfire resilience program manager, Hoppin said. “This is not only to coordinate the fuel reduction efforts across (government) agencies, but to build capacity with the Fire Safe Council so that they can continue to do education and outreach at the neighborhood level,” Hoppin said.

A similar civil grand jury report in 2020 called for more attention and funding for vegetation management. County supervisors responded in part that vegetation management was mainly the responsibility of property owners. Supervisors acknowledged that the county could do more to remove vegetation along county-owned roads, but the process “is expensive and labor intensive” for a county that provides many services to the community, the supervisors wrote.

The Santa Cruz County Fire Department and the county administrative officer had identical responses to that finding.

How we got here

For the past century across California, forest management policies have worked to suppress all wildfires and allowed undergrowth to get out of control, the report states. That undergrowth of fuel makes fires burn hotter and spread faster.

The civil grand jury report discusses ways in which climate change is expected to worsen already fire-prone areas through more intense drought periods and hotter temperatures. In 2020, 4.2 million acres burned in California — which is the most land burned in California’s recorded history. 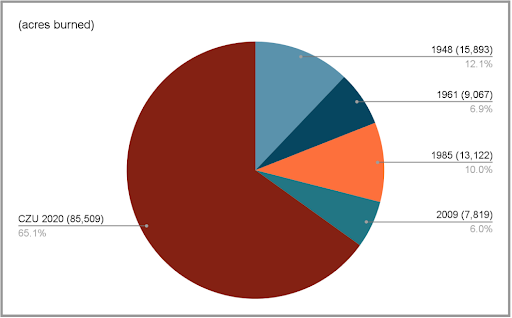 Although some prescribed burns take place each year — often in state parks — costs are high, the report states. Alternate ways to reduce vegetation such as wood chipping can also help reduce fuel for fires.

“As Cal Fire builds out vegetation management projects, we have to do it a couple years in advance due to the time it takes to go through the CEQA (California Environmental Quality Act) process,” Armstrong said at the meeting.

Cal Fire in Santa Cruz County also has three “curtain burners” about the size of a dumpster that is enclosed and eliminates flying embers. 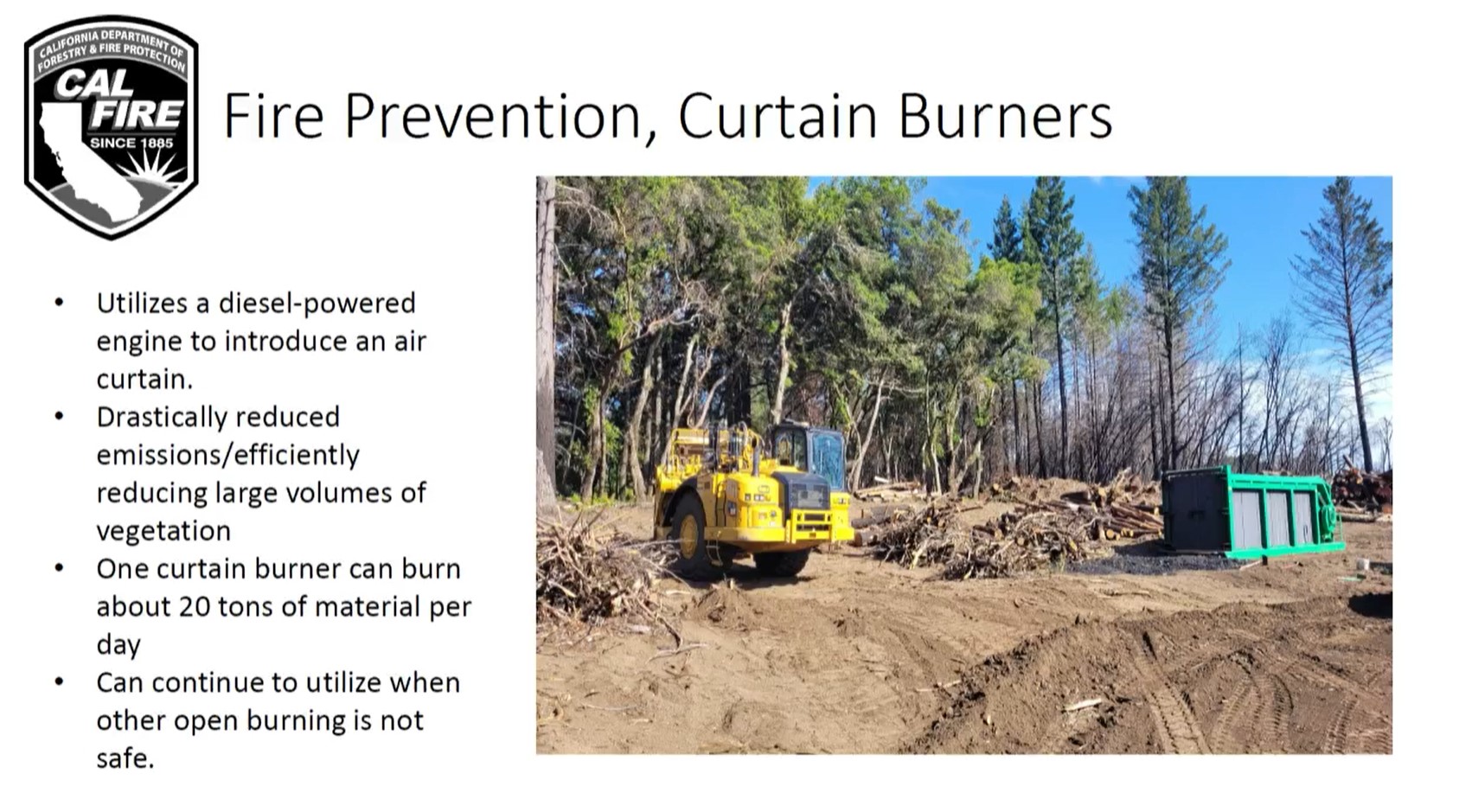 Cal Fire in Santa Cruz County has three curtain burners to reduce brush to ashes in a more contained and environmentally friendly way. An image from a June 28 Santa Cruz County supervisors meeting describes how they work. (Cal Fire) 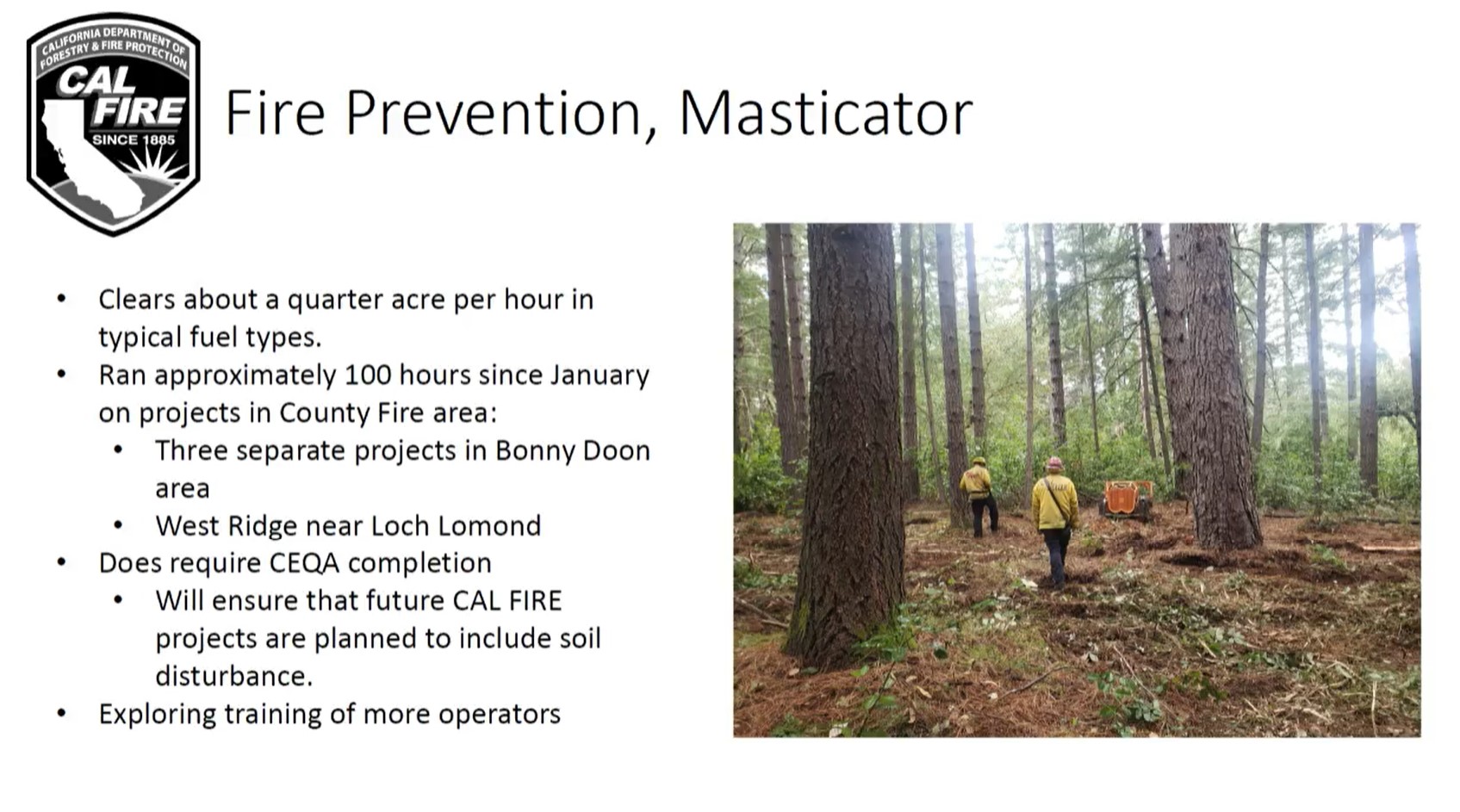 The civil grand jury report states that the Santa Cruz County Fire Department does not have money or adequate staff to implement a large-scale fire reduction project. County Fire includes volunteers in cooperation with Cal Fire at fire stations in Loma Prieta, Corralitos, Davenport, Bonny Doon and South Skyline. County Fire and Cal Fire leaders have reported that they do not give vegetation reduction enough priority and visibility.

Other fire agencies such as Santa Cruz Fire are responsible mainly for urban areas as well as some forested areas. “We have to prioritize funding, because that’s really what it comes down to,” said Santa Cruz Fire Chief Rob Oatey, in response to the civil grand jury report. “We are understaffed and underfunded. We have to remain vigilant and focused and have the hard conversations.”