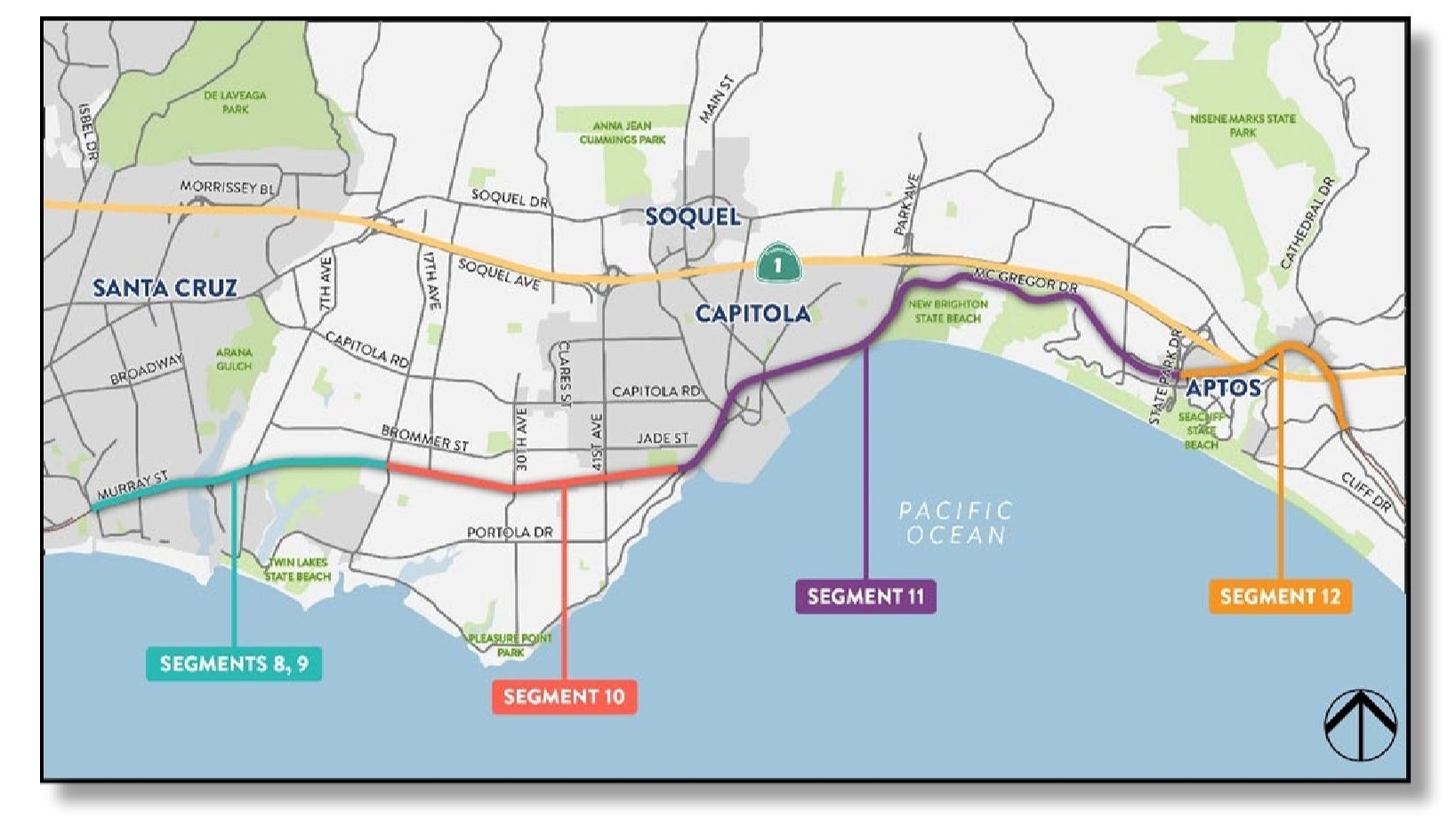 Correction: Cost estimates of rail plans were incorrectly stated in an earlier version of this story.

SANTA CRUZ >> Rail trail project planners showed renderings and maps of two versions of the paved path from Santa Cruz to Live Oak during a public workshop on Thursday, March 31.

The images were the first to publicly detail Segment 8 and Segment 9 of the proposed path along the Santa Cruz Branch Rail Line. Thursday, leaders gathered input from a few dozen people so plans can be refined. Comments on Segments 8 and 9 are due April 15.

For Segment 9, planners have started designs for two possibilities:

An environmental impact report for the two versions of the rail trail on Segment 9 is due at the end of the year.

Because the bike path was recently upgraded along Beach Street near the Santa Cruz Beach Boardwalk, relatively few major changes are proposed:

Santa Cruz City Engineer Nathan Nguyen has said that some goals of the project are to add cyclists and walkers on the path and facilitate bike trips to schools and businesses. City planners are working with staff of the Santa Cruz County Regional Transportation Commission and RRM Design Group on Segment 8 plans.

No railroad tracks are proposed to be removed on Segment 8 and no upgrades are expected to the San Lorenzo bridge path that was widened to 10 feet in 2019, Nguyen and other engineers at the meeting said. 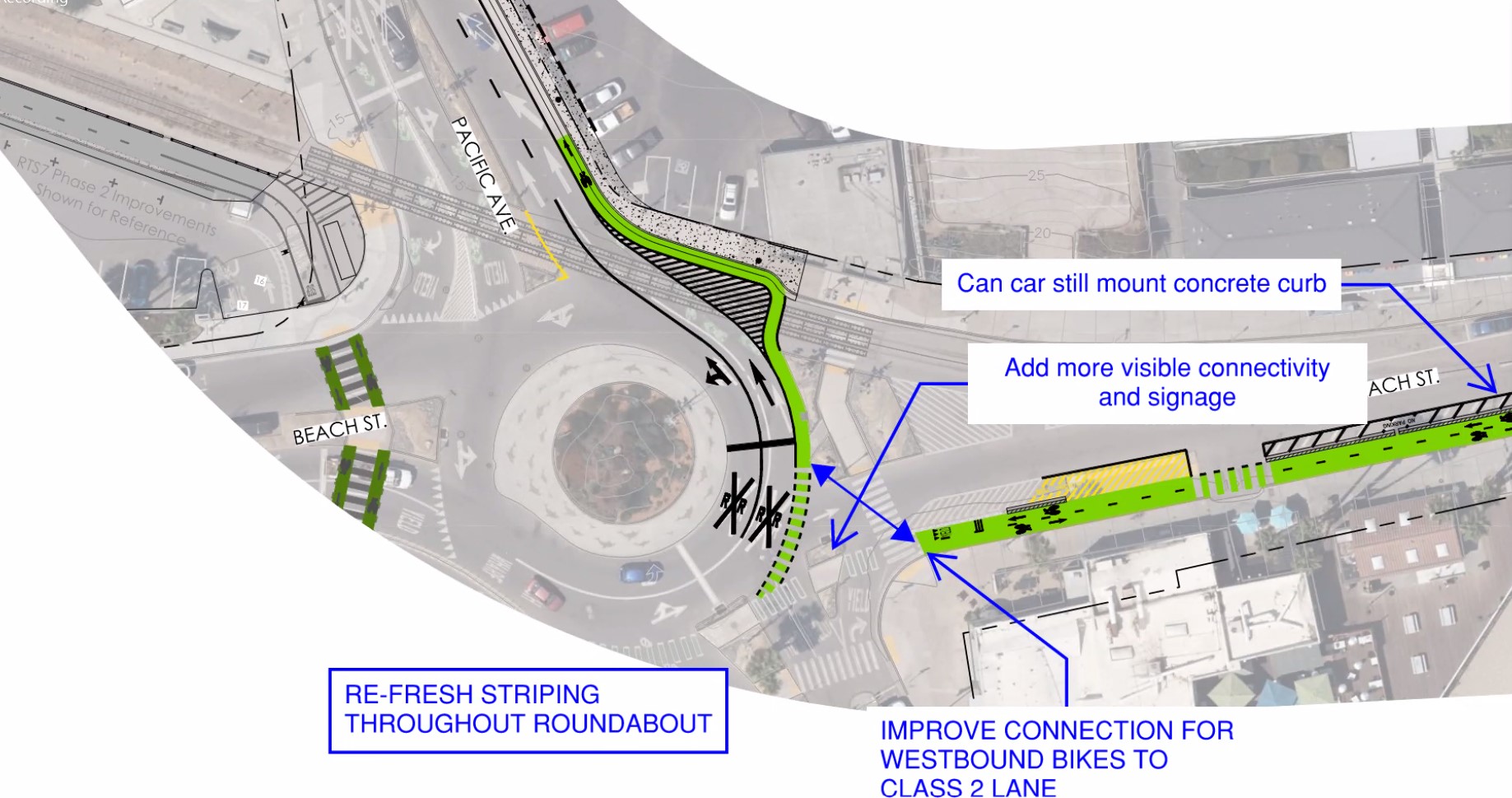 On Pacific Avenue in Santa Cruz, a green bike path is proposed to cross the railroad tracks perpendicular rather than its current angle. Arrows show where some cyclists said they wanted a safer connection from the bike path to the traffic circle. Notes are from residents’ suggestions during a March 31 workshop. (RRM Design Group)

Several participants said they wanted to improve the way westbound cyclists on the bike path enter the traffic circle at Beach Street and Pacific Avenue. They described “conflicts” with drivers as they tried to enter the roundabout. Better signs or a painted bike path could be changed in the plan, designers said. 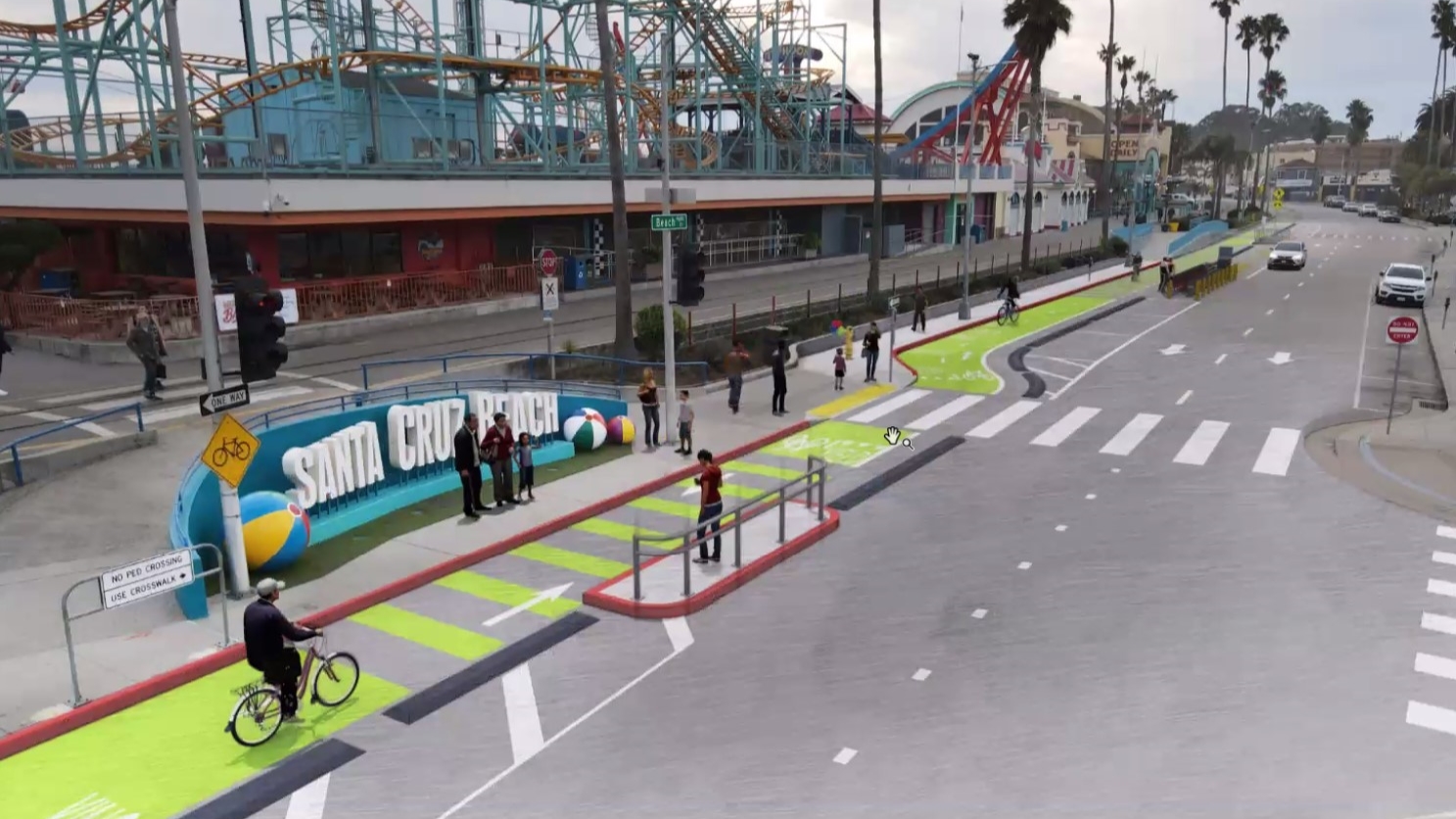 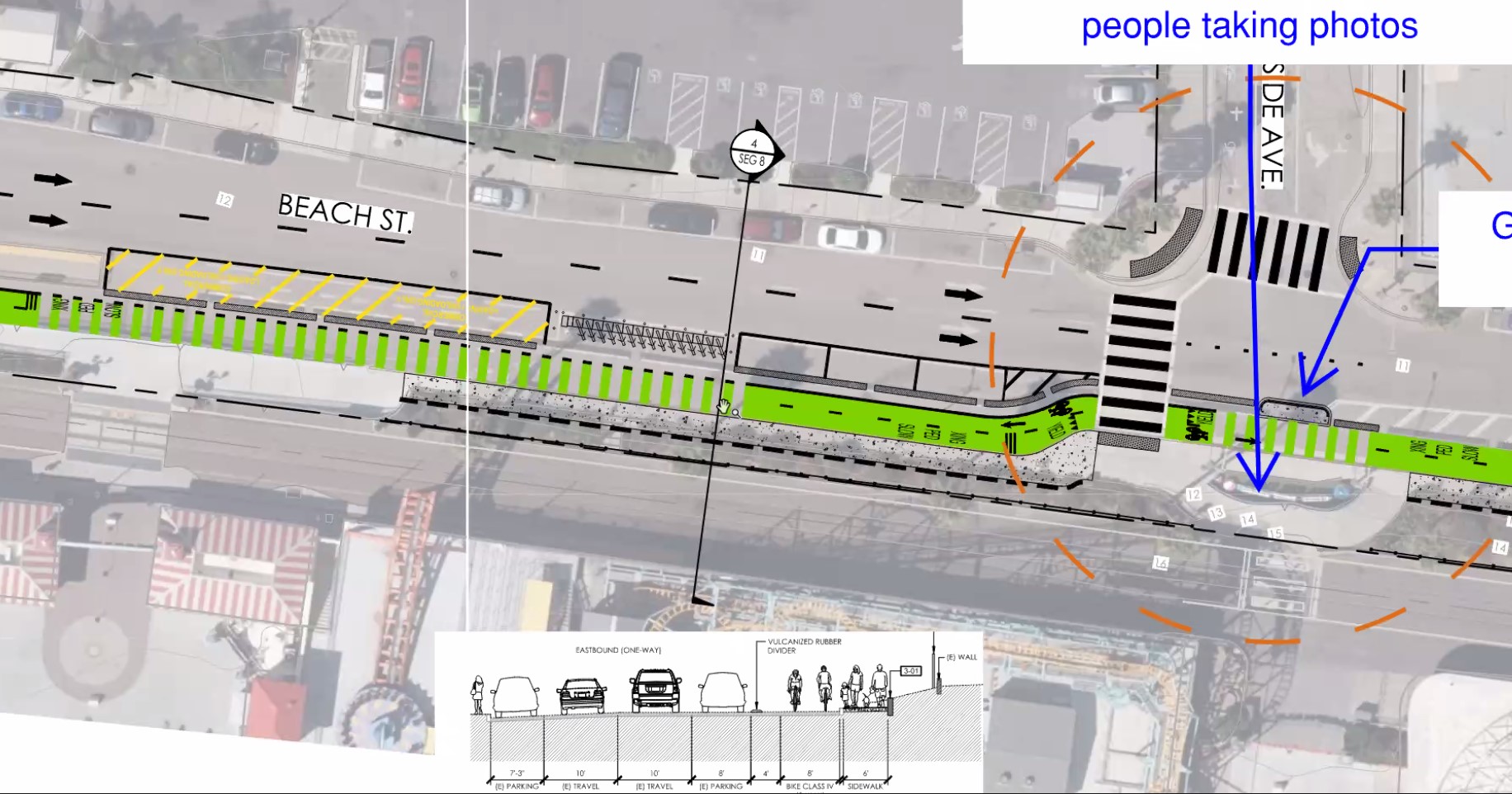 A rendering shows a new sidewalk island where photographers could stand away from the bike path. (RRM Design Group)

From the San Lorenzo River to 17th Avenue, planners from the City of Santa Cruz, County of Santa Cruz and RRM Design Group discussed several proposals.

Two versions of the trail are proposed for the environmental impact report. The first is an “interim” plan with a paved path on the rail line, the second is an “ultimate” plan with a path parallel to the railroad. 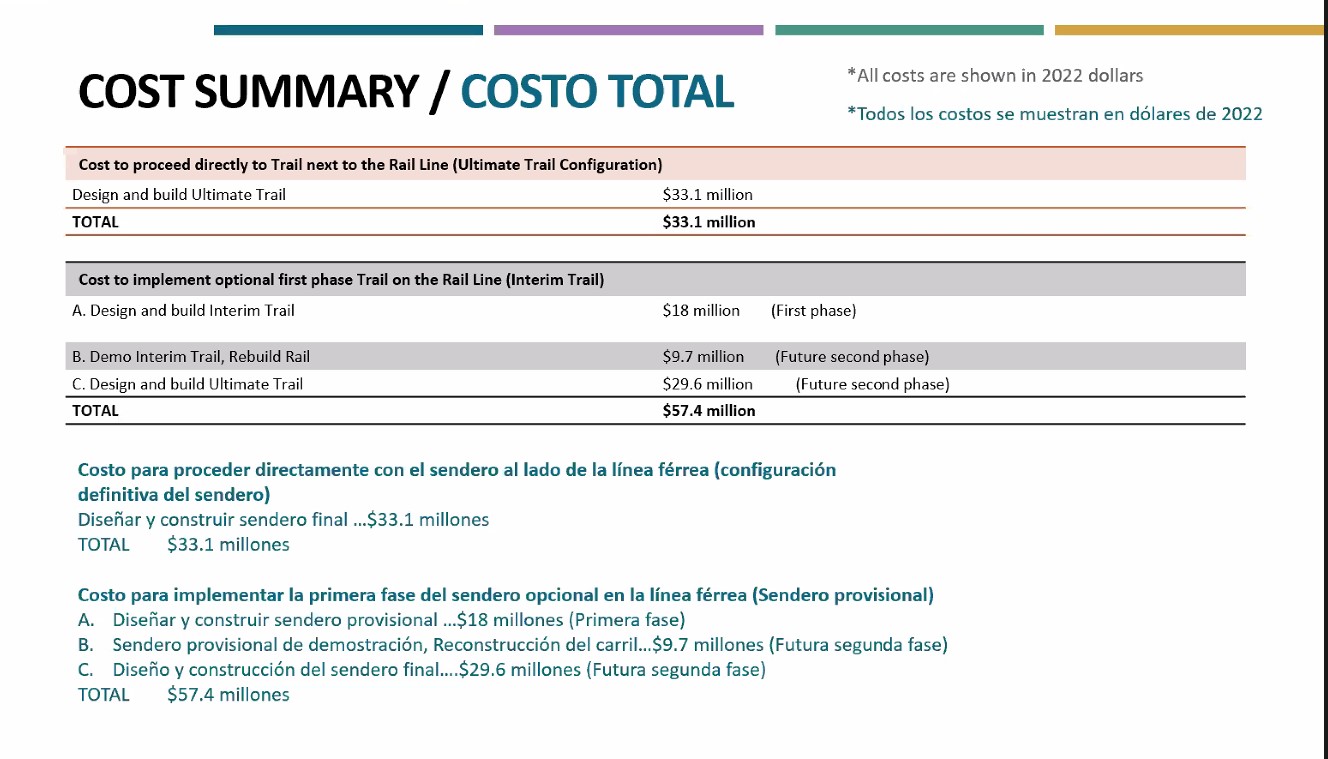 The “ultimate” and “interim” plans along Murray Street include new crosswalks and new stop signs for cyclists where the path crosses Mott and Seabright Avenues.

An “ultimate” plan, top, proposes a new crosswalk on Seabright Avenue. An “interim” plan, below, shows a path above where the railroad now runs. (RRM Design Group)

Some participants at Thursday’s meeting said the 10-feet-wide San Lorenzo bike bridge was wide enough to accommodate cyclists and walkers, while others said they wanted wider paths on the proposed Murray Street bridge.

A major crossing is where the path meets Seventh Avenue. Flashing lights are proposed in both plans to alert drivers of passing cyclists and walkers, Nguyen said.

Engineers also emphasized safety in its proposed path options at 17th Avenue because of children who walk to nearby Shoreline Middle School. Flashing lights and advanced warnings for drivers are proposed, as well as a raised median so walkers can cross half the street at a time. 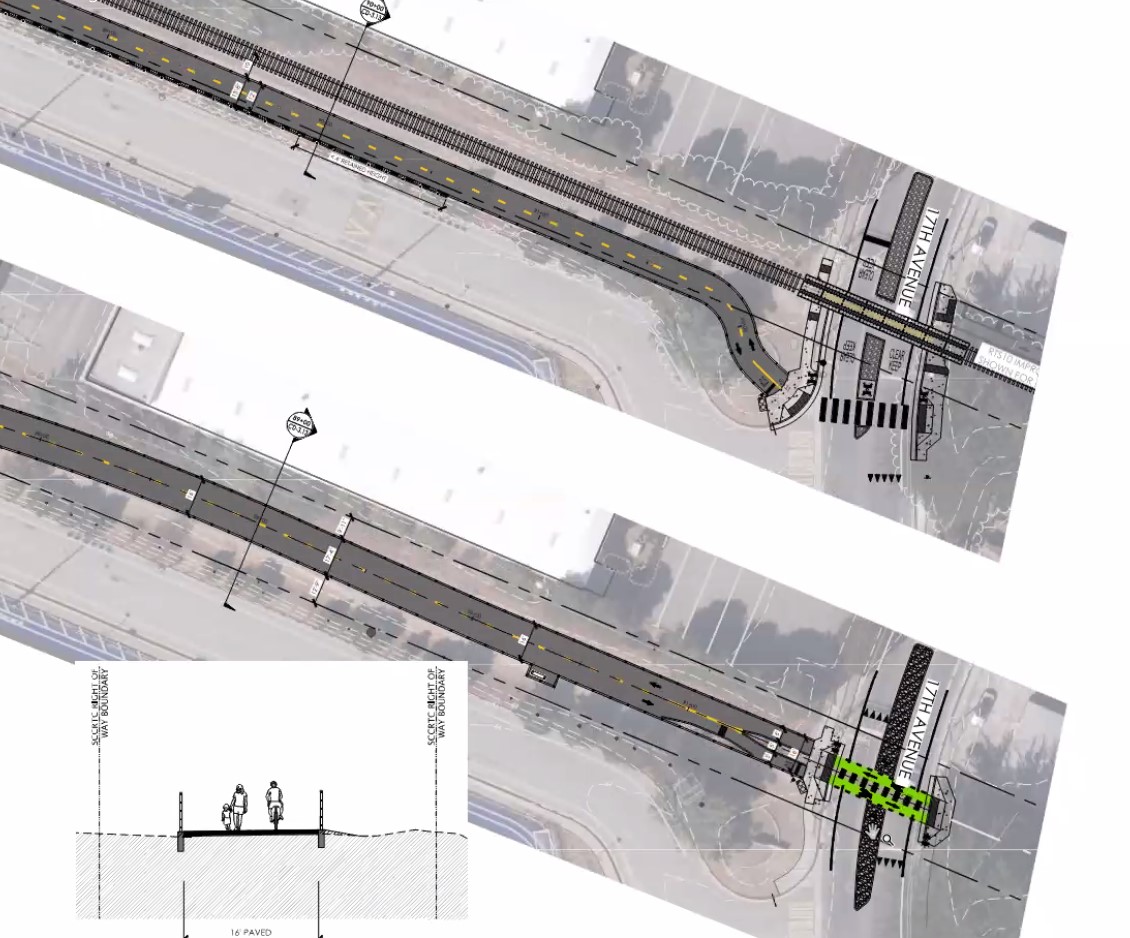 Feedback on Segments 8 and 9 can be emailed to Santa Cruz City Engineer Nathan Nguyen by April 15.