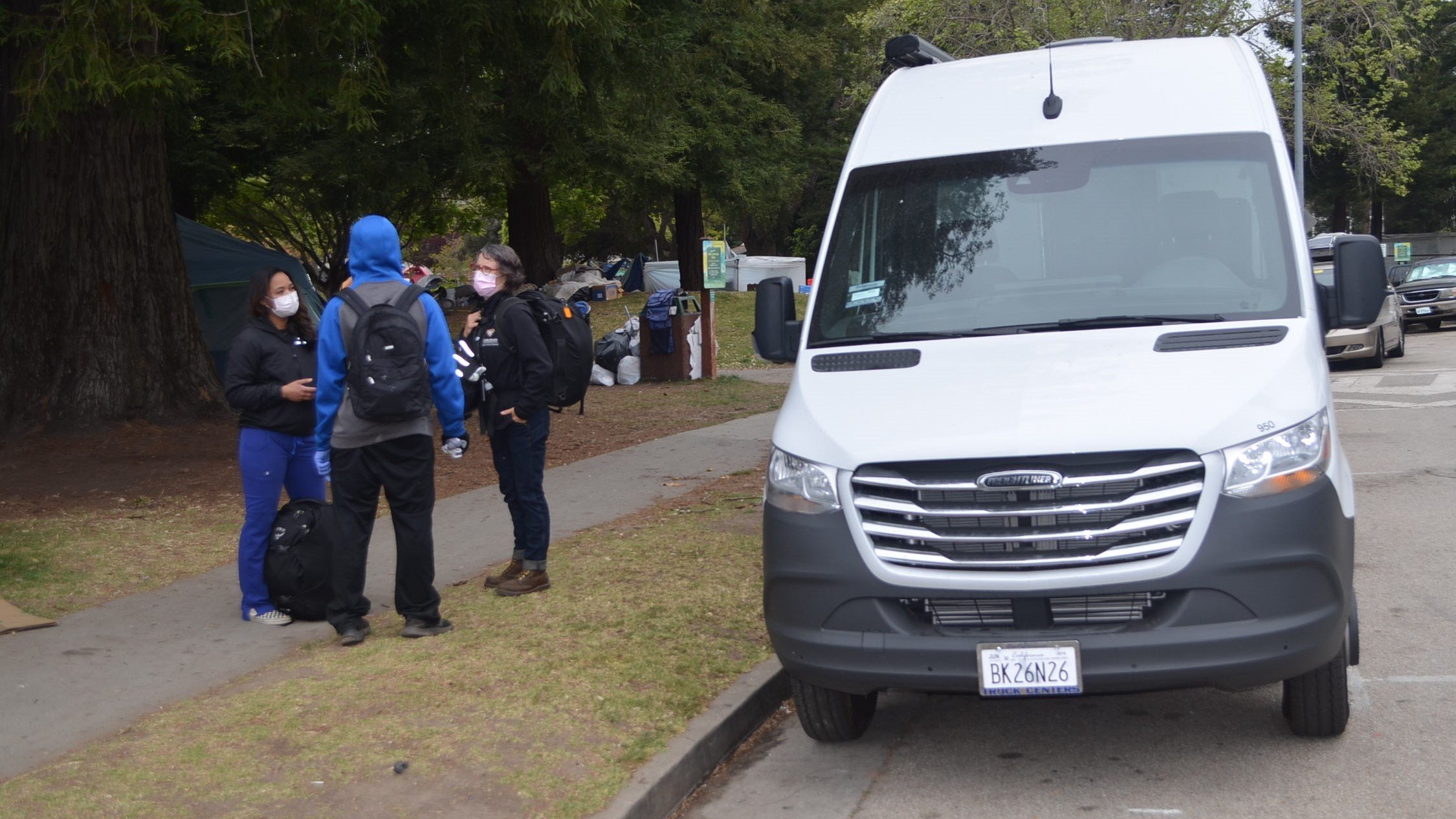 Public Health Nurses Marie DelRosario, left, and Suzanne Samson of the Homeless Persons’ Health Project talk to a man during a visit to a homeless camp on Dakota Avenue in Santa Cruz in April. (Stephen Baxter — Santa Cruz Local)

SANTA CRUZ >> For Sarah Leonard, many problems with mental-health crisis response boil down to fear.

When a person is in crisis, sometimes that person or a loved one will avoid calling 911 because of a fear of mistreatment by police, injury or jail. Fear in a police officer’s head, Leonard said, also helps explain why some have used force during mental health crises in Santa Cruz County in recent years.

“Sometimes the police act incredibly lovingly toward people with severe mental health issues, I mean truly,” Leonard said. “And sometimes they are indifferent, callous, even harassing towards certain individuals that they have deemed not a public benefit — but who may be absolutely wonderful, redeemable individuals who actually might not have done anything wrong.”

Leonard is executive director of Santa Cruz’s Mental Health Client Action Network. Her group offers peer support and many other services by phone and on Cayuga Street in Santa Cruz. She’s also one of the roughly 1 in 4 Americans who suffer from a mental health disorder.

Leonard said she has “taken knives away from people that were threatening people.” She said, “I have talked down plenty of people, so have many other peer-support workers in situations which might have led to violence from the police,” Leonard said. “The majority of the time, people don’t call the police because they’re afraid of them.”

Because mental health services have not matched the need in California, and because 911 has become a catch-all for services beyond the original scope of fire, law enforcement and medical emergencies, officers and deputies in Santa Cruz County have become the default, 24-hour response to mental health crises.

“We’re interested in having somebody other than the police handle all the calls that don’t need police,” said Peter Gelblum, chairman of the Santa Cruz County chapter of the American Civil Liberties Union of Northern California. “Some things just do not involve and should not involve law enforcement,” Gelblum said. “I haven’t heard any kind of ringing defense of ‘Oh, no, we think the police should go out and respond to suicidal people or people with mental illness or homeless people.”

Among the more than 400 people shot and killed annually by law enforcement officers nationwide in the past five years, 20% to 40% of them have suffered from a mental health problem, according to the FBI.

In Alameda County a few years ago, county leaders set out to reduce the number of 5150 holds, unnecessary hospital visits, ambulance rides and law enforcement time spent on non-criminal mental health crises. They started a program called the Community Assessment and Transport Team, or CATT.

State law allows police or mental health professionals to take people for an involuntary psychiatric hold or “5150 hold” if that person is a danger to themselves or others or is unable to care for themselves. Sometimes when police respond to mental health crises, police send the person to a locked psychiatric facility — sometimes against their will — for 72 hours. Those holds can save a person’s life, mental health professionals said, but overuse of such holds can be counterproductive for the client and first responders.

In 2015, Alameda County in the East Bay had the highest rate of involuntary psychiatric holds in California, according to state records. Many of those holds came from law enforcement responses because the person met a 5150 criteria. It’s one of the few tools that officers and deputies have to handle mental health crises.

Alameda County leaders and residents found several problems with the high number of such holds. Many of those held did not need psychiatric care, county leaders found. And people who did not qualify for a hold then received no other care, according to Alameda county staff.

“People who do not qualify for 5150 holds are not successfully linked to planned services and continue to over-use emergency services,” Alameda County staff wrote in a 2018 report. “First responders spend many hours addressing behavioral-health related 911 calls that would be better served in a different manner.”

In July 2020, Alameda County leaders launched a program called the Community Assessment and Transport Team, or CATT. Dispatched through 911, a clinician and emergency medical technician respond to crises related to mental health or drug use. The program is similar to a nationally recognized Oregon program called CAHOOTS — or Crisis Assistance Helping Out On The Streets — which has a non-licensed mental health counselor and an emergency medical technician in a van to treat and transport patients typically without law enforcement. Out of the 24,000 calls that CAHOOTS answered in 2019, about 17% of those calls otherwise would have gone to law enforcement, the group reported.

“CATT provides mental health assessment, crisis intervention, medical assessment, information, referral, and transportation to a variety of voluntary settings. CATT hopes to divert individuals who are not in need of involuntary hospitalization or an emergency department whenever possible,” according to Alameda County documents. Teams also can write 5150 holds if necessary.

CATT started with separate teams in Oakland, San Leandro and Hayward. They started in those three cities rather than the whole county to find problems and solutions, Alameda county leaders said. The teams’ initial hours were 7 a.m. to 11 p.m.

Some of the goals of the Community Assessment and Transport Team were:

It’s not yet clear how many 5150 holds were reduced by having the CATT team respond, Alameda county leaders said this month.

The idea of expanding mobile mental-health crisis response in Santa Cruz County is not new.

“I and other members of MHCAN have approached the county for years about a CAHOOTS-like effort,” said Sarah Leonard said, executive director of the Mental Health Client Action Network in Santa Cruz. She said lack of funding is usually blamed, but a new state and funding structure with Assembly Bill 988 could change that. Similar to 911 dispatch funding, it’s expected to tack on a fee to residents’ phone bills to pay for emergency dispatch to non-police emergency response by dialing 988. The response team itself is expected to be funded 85% by the federal government. It could start in mid-2022 or 2023, leaders have said.

“People typically call when they are experiencing mental distress or witnessing crisis episodes with friends, family or colleagues. This includes hearing from others that they are feeling suicidal,” said Cassandra Eslami, who runs the Mobile Emergency Response Team. “Mental health crises can affect anyone,” Eslami said. “People call for a variety of reasons from a variety of backgrounds and situations, including those stably housed and those experiencing homelessness.”

A separate van is expected to launch for North County in July 2022. It often responds to schools and provides a safe and confidential space for students and a licensed clinician.

Sarah Leonard again, the leader of Mental Health Client Action Network, said she “really appreciates” MERT. “I think it’s one of the best things the County of Santa Cruz mental health has ever done. However, there’s a big disconnect between the police department and MERT,” Leonard said. “There are times when Santa Cruz police will have an encounter with someone where they should themselves be activating MERT.”

Until non-police responses to mental health crises expand in Santa Cruz County, most crises will continue to be handled by law enforcement.

Police chiefs in Santa Cruz and Watsonville have expressed interest in reducing law enforcement response to calls related to mental health where there is no apparent safety threat. A Watsonville Ad-Hoc Committee on Policing and Social Equity also has chosen mental health crisis response as an area of study for potential changes.

Santa Cruz County data on 5150 holds is incomplete. During such holds, the person can be taken against their will to the county’s contractor-run Crisis Stabilization Facility or Psychiatric Health Facility, both at 2250 Soquel Ave., Santa Cruz. Patients are often sedated with medications.

In 2017, Watsonville police performed more 5150 holds than police who had the department’s mental health liaisons with them, according to police records. The liaisons accompany an officer to calls related to mental health. 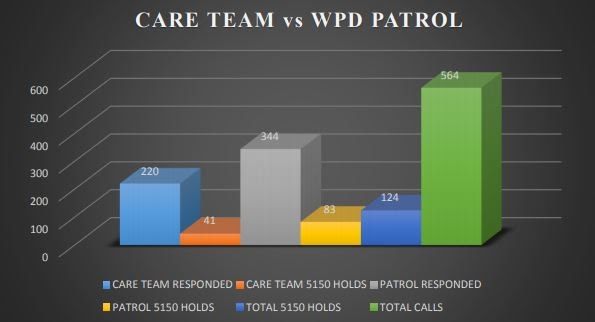 When Watsonville police officers were surveyed by a San Jose State University graduate student, more than 2 out of 3 officers said they wanted more coverage from the mental health liaisons.