This is Santa Cruz Local’s AgendaWatch newsletter issue for Sunday, Sept. 19, 2021. Our newsletter informs Santa Cruz County residents of big upcoming decisions in local government and how to get involved.

Tuesday, the Santa Cruz City Council will discuss proposed limits on RV and trailer parking for residents and visitors. The proposal by Vice Mayor Sonja Brunner and Councilmembers Renee Golder and Shebreh Kalantari-Johnson comes in response to Westside residents’ concerns about trash, waste and crime related to people who live in their vehicles. The proposal would not be enforced until city leaders designate more places for homeless people to park at night.

The proposal would update the city’s 2015 overnight parking ban and align it with a new city law that limits where and when homeless people can camp.

Editor’s note: This story has been updated. A previous version misstated the year the Santa Cruz City Council adopted an overnight parking ban.

Tuesday, the Santa Cruz City Council is expected to begin a process to raise rates for city water customers. The proposed increase is largely driven by $271 million of planned water infrastructure and supply projects by 2027.

County supervisor districts to be redrawn 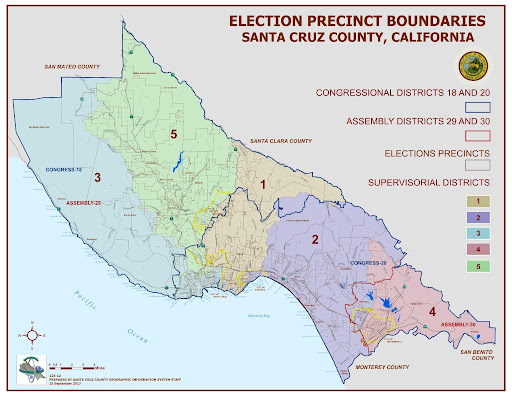 There are five county supervisor districts. The districts include pieces of the four cities: Watsonville, Capitola, Santa Cruz and Scotts Valley. City boundaries are in yellow. (County of Santa Cruz)

Boundaries of Santa Cruz County’s five supervisorial districts are being redrawn based on Census data. The boundaries shift every 10 years, and the goal is to “create districts that are substantially equal in population and representative of the communities they serve,” Santa Cruz County spokesman Jason Hoppin wrote in a statement.

Final maps are expected to be approved by county supervisors in December. At the following meetings, residents can provide input on how neighborhoods are grouped in the districts.

The Redistricting Advisory Commission makes recommendations to the supervisors. It includes Cheri O’Neil of the first district, Michael Watkins of the second district, Kris Reyes of the third district, Peter Radin of the fourth district and James Mosher of the fifth district . Find more information about county redistricting at the county’s website.

The Capitola City Council will consider grant applications for road and sidewalk projects from about $11 million available from the Santa Cruz County Regional Transportation Commission.

Capitola is expected to receive $400,000 to $1 million based on prior awards and a competitive evaluation, Capitola Public Works Director Steve Jesberg wrote in a report. Projects in the grant application include: 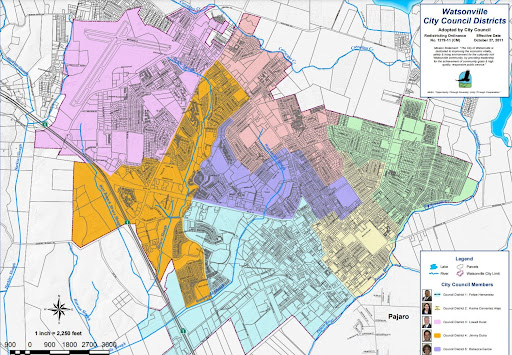 Watsonville City Councilmember Aurelio Gonzalez has stepped down from the city council because of an ongoing family emergency.

Watsonville has had district elections since the 1980s, after a Supreme Court case found that at-large elections diluted the voting power of Latinos.

After every 10-year census, city leaders shift the district boundaries so that each district has roughly the same population.

“It’s a big significance because we are growing,” said former Watsonville mayor Oscar Rios on Friday. Rios was the first Latino to win a Watsonville council seat after the court ordered district elections in 1989. “And so we have to look at what the districts are.”

Watsonville city council districts are expected to be redrawn in the coming months and approved by the city council in December. Several meetings will take place to gather public input and review census data. 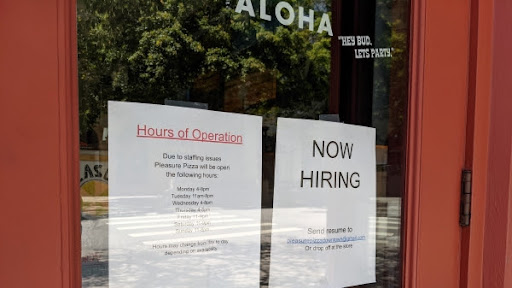 A sign at Pleasure Pizza at 1415 Pacific Ave. in Santa Cruz shows reduced hours because of a lack of staff in September. (Stephen Baxter — Santa Cruz Local)

A Walkabout Job Fair on Friday, Sept. 24 will include more than 30 downtown Santa Cruz businesses who need part-time and full-time employees.

The event coincides with UC Santa Cruz’s Downtown Day. “Slugs can discover or rediscover local businesses, get to know the streets of downtown, and watch performances by student clubs including Sabrosura Latin Dance Troupe and Cloud 9 A Capella,” UCSC spokesman Scott Hernandez-Jason wrote in a statement.

UCSC’s first day of instruction in the fall quarter is Thursday, Sept. 23. 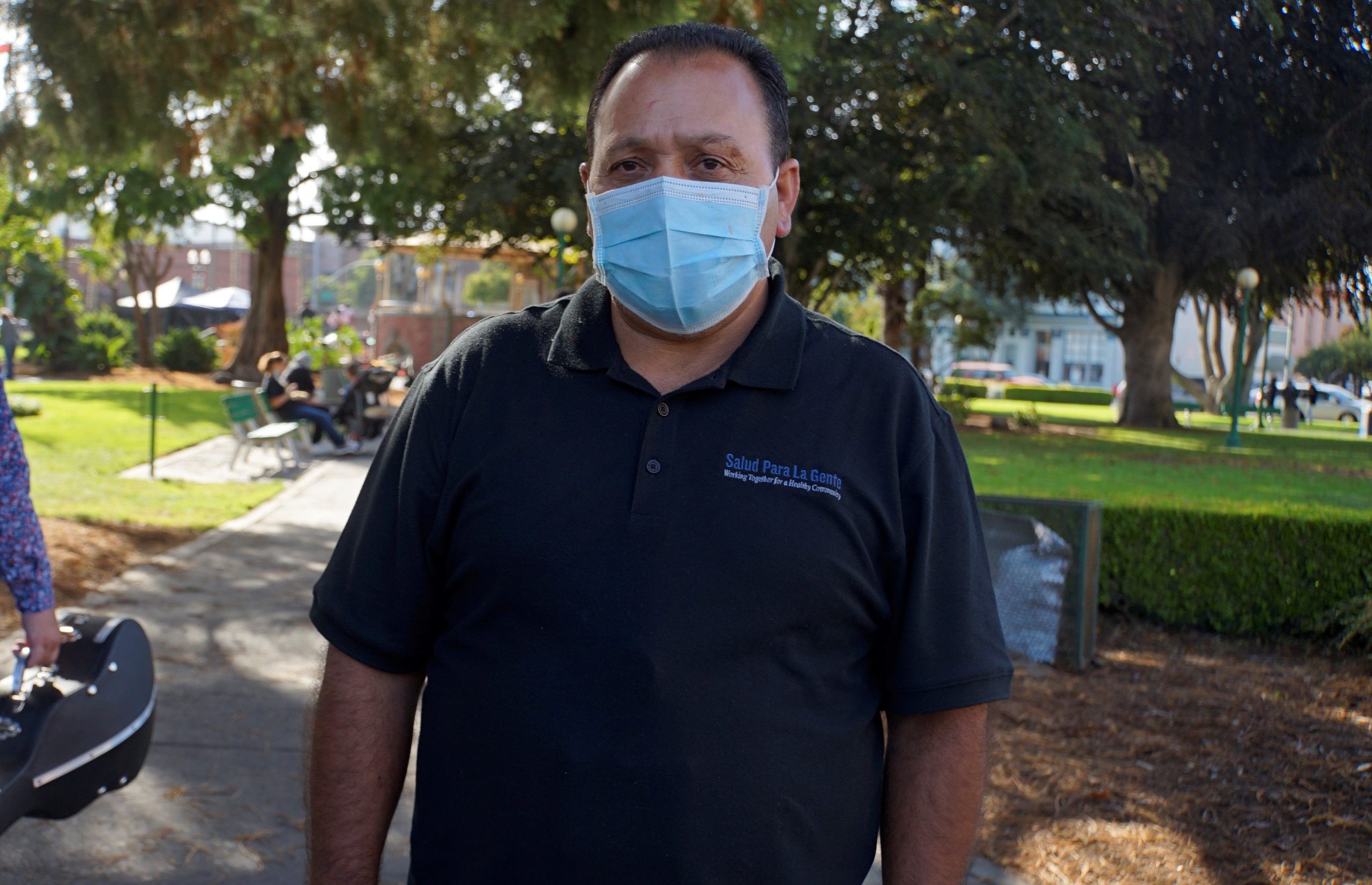 Infante Garcia described himself as hard working and mentally strong. “I want people to see that even with all of that, I live and work just to eat. I cannot imagine a house or a good future, not right now. I just work to survive,” Infante Garcia said in an interview Friday at the Watsonville Farmers Market. He spoke in Spanish.

Infante Garcia and his wife live in their car. Infante Garcia is one of more than a dozen homeless people Santa Cruz Local has interviewed in recent weeks, as part of an investigation into solutions to homelessness in Santa Cruz County.

Infante Garcia has been homeless for almost three years. When he rented an apartment, his debt grew. “I had to make a decision: either eat or rent,” Infante Garcia said.

He said his wife receives disability payments. They earn too much to qualify for housing assistance, he said. They cannot afford an apartment due to move-in costs that include first and last month’s rent plus a security deposit. He wants a service that would cover his move-in costs, he said.

We want to hear from you. What information or resources do you need related to homelessness in Santa Cruz County? How are you impacted by homelessness?

Your feedback will help guide our reporting.

What’s missing in your neighborhood?

We posed this question in our last newsletter issue. Here are some of your responses:

“Sidewalks are hit and miss in my neighborhood. I live just a couple blocks from a major transportation corridor and I’d like to be able to walk to nearby bus stops, grocery stores, pharmacy, library and various shops without having to walk in the street. I’d like to see the Regional Transportation Commission dedicate part of their budget to helping property owners where sidewalks are missing to complete continuous sidewalks to facilitate walking and the use of public transportation and reduce greenhouse gases.” —Jan Karwin

We’re asking you questions in our newsletter and sharing your responses because we want to get to know you better. And we want you, our Santa Cruz Local readers, to get to know each other a little bit too.