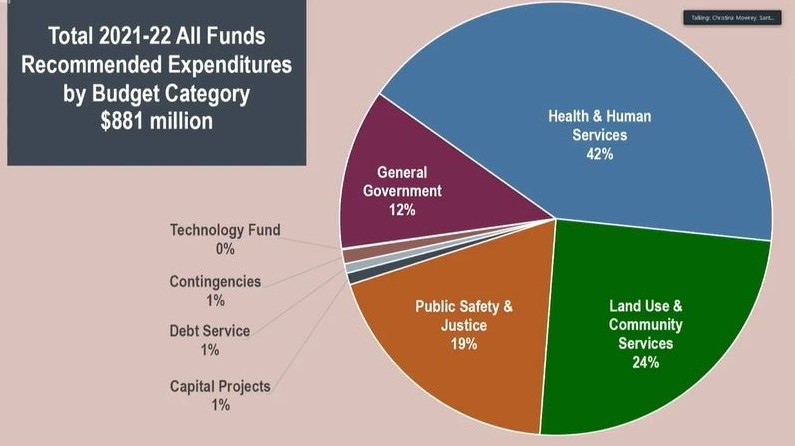 SANTA CRUZ >> Santa Cruz County leaders this week described an expected $881 million county budget that brings back about 50 county positions to its workforce of about 2,400 people.

During a county budget hearing this week, County Administrative Officer Carlos Palacios said the number of county staff remains lower than it was in 2008. “We have yet to get where we were more than a decade ago in terms of number of staff, and yet we are providing many more services,” Palacios said.

Another change is that more than half of county employees are expected to be able to continue to work from home two days a week. The policy is expected to save about 366,600 car trips annually, county leaders said. More than 89% of county employees said remote work did not negatively impact their productivity. County government is Santa Cruz County’s second largest employer.

Palacios said a lingering challenge is that expenses continue to outpace revenue. Some employee pension liabilities remain unfunded. Palacios said negotiations with employee unions and pension obligation bonds’ that supervisors could approve this summer would help the situation.

Supervisor Ryan Coonerty asked when those savings might start, and Palacios said big gains are expected in about 20 years. “They decrease significantly over time,” Palacios said. “That’s when all the pension reforms start really taking effect.”

County leaders are expected to discuss the budget for public safety including the Sheriff’s Office at 9 a.m. Thursday.

To participate: Join on Zoom or dial 1-669-900-6833, meeting ID 840 7832 7816. To comment ahead of time, email [email protected] or visit the agenda and click the speech bubble icon next to the agenda item. The meeting will also be broadcast on Facebook with no login required.