WATSONVILLE >> Watsonville city leaders on Tuesday stepped toward a city budget that nearly doubles money for the Parks and Community Services Department’s budget and sets up an overhaul of Ramsay Park — but many residents said they were unhappy with an 8% increase in the police budget.

The city is expected to approve its final budget for the next two fiscal years at its June 22 meeting.

Tuesday, the council also voted 5-2 to raise its own pay by about $29 per month, from $578 to $607. The raise would make the council members’ annual pay about $7,293 before taxes. Councilmembers Rebecca Garcia and Aurelio Gonzalez voted no. Mayor Jimmy Dutra, Mayor Pro Tempore Ari Parker and Councilmembers Francisco Estrada, Lowell Hurst and Eduardo Montesino voted yes. A second reading for final approval of the raise will take place June 22.

Cindy Czerwin, the city’s administrative services director, essentially said the budget sets the city on a path toward adding services and reducing a long-term deficit. “A year ago we were expecting our revenues to plummet. And that never really happened,” Czerwin said. 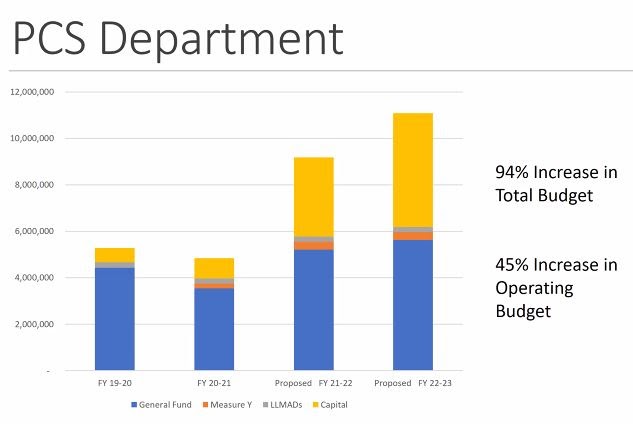 A chart shows a proposal for increased money for Watsonville’s Parks and Community Services Department. (City of Watsonville) 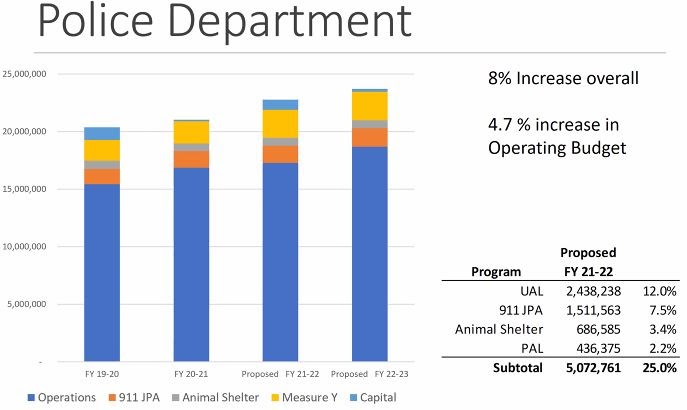 Watsonville’s police budget could rise with a proposed budget for the fiscal year that starts July 1. (City of Watsonville)

At Tuesday’s online meeting, more than a dozen residents spoke in favor of reducing the police budget and using that money for the parks department or other services.

Anissa Balderas, who serves on the city’s Ad-Hoc Committee on Policing and Social Equity, suggested a hiring freeze for the police department. “Public safety is not achieved by policing, but by addressing racial and economic inequities at the root,” Balderas said. “Police are tasked with jobs that they are not meant to do. They are not social workers. The city should be investing in long-term care and preventative solutions.”

Councilmember Francisco Estrada, who also serves on the Ad-Hoc Committee, asked how the committee’s recommendations expected in August could change police funding. City staff said the committee could change how money is allocated within the police department or make other changes depending on city council approval.

They are expected to rise about $900,000 in the fiscal year that starts July 1. “That’s a huge increase,” Czerwin said. “It’s really taking a bite out of our ability to increase and even maintain some of our operations.”