Views of the unhoused in Santa Cruz County

Editor’s note: Santa Cruz Local interviewed dozens of unhoused people in Santa Cruz County in September 2021. We wanted to know what information and resources people need, as well as their solutions for homelessness. Share your views here. 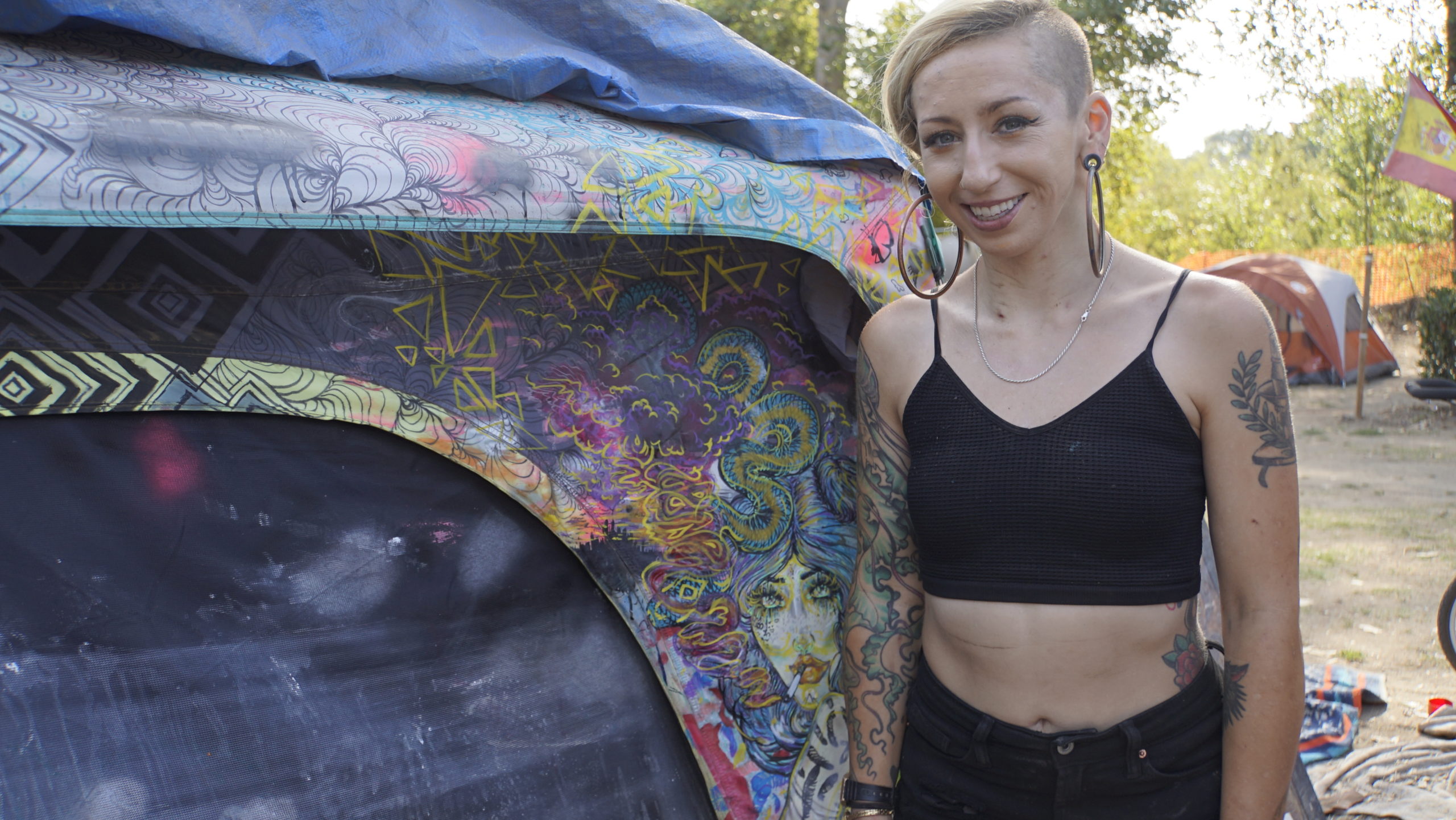 Artist Milan Evje, 32, has lived in Santa Cruz for about four years. Her dream is to buy land where she and others could live outside and “not be bothered,” she said. She would rather live in an apartment if she could get a rental assistance voucher. But that feels like a long shot, she said.

Evje became homeless about four years ago in San Jose. She struggled with drug addiction. While she was in a rehab program, she was arrested. When she was released from jail, she had nowhere to go. She followed her former boyfriend to Santa Cruz.

Evje said she would like to find work, but it’s not a top priority. Lately she has spent much of her energy babysitting a 3-year-old boy who is homeless. Evje has tried to find him day care, preschool, dental care, a primary care doctor and the recommended childhood vaccines.

“It’s a little strange because I never saw myself with a toddler randomly, let alone somebody else’s toddler and definitely not in a homeless camp. I’m constantly trying to just stay as flexible and open minded as possible,” she said.

Evje said that information about resources is hard to find. She said it’s difficult to navigate all the disconnected service providers. “Homelessness is such a thing in Santa Cruz. It doesn’t have to be as dark and helpless as it is,” Evje said.

Evje said it’s particularly difficult to be homeless as a woman. The emotional toll weighs on her.

“It’s so physically exhausting, especially if you don’t have a camp,” Evje said. “Oh my god, it’s like such a nightmare. Just trudging through wherever with all your stuff, trying to carry it. Just think about having everything you own in a pack on you. And that’s not even counting like food or water. That’s just your belongings that you hope to god you don’t lose or get stolen. What would that look like? How many pairs of shoes would you have? What type of shoes would you have? Because they would have to be decent looking enough for you to not be looking super homeless, right? Because you don’t want to look super homeless. You still want to keep a sense of normal.”

When asked what she needed, Evje said she and others at the camp need survival gear: power, lighting, size AA and AAA batteries, larger rechargeable batteries, bluetooth speakers that can charge devices, cellphones, warm clothing, and waterproofing spray for tents and shoes. 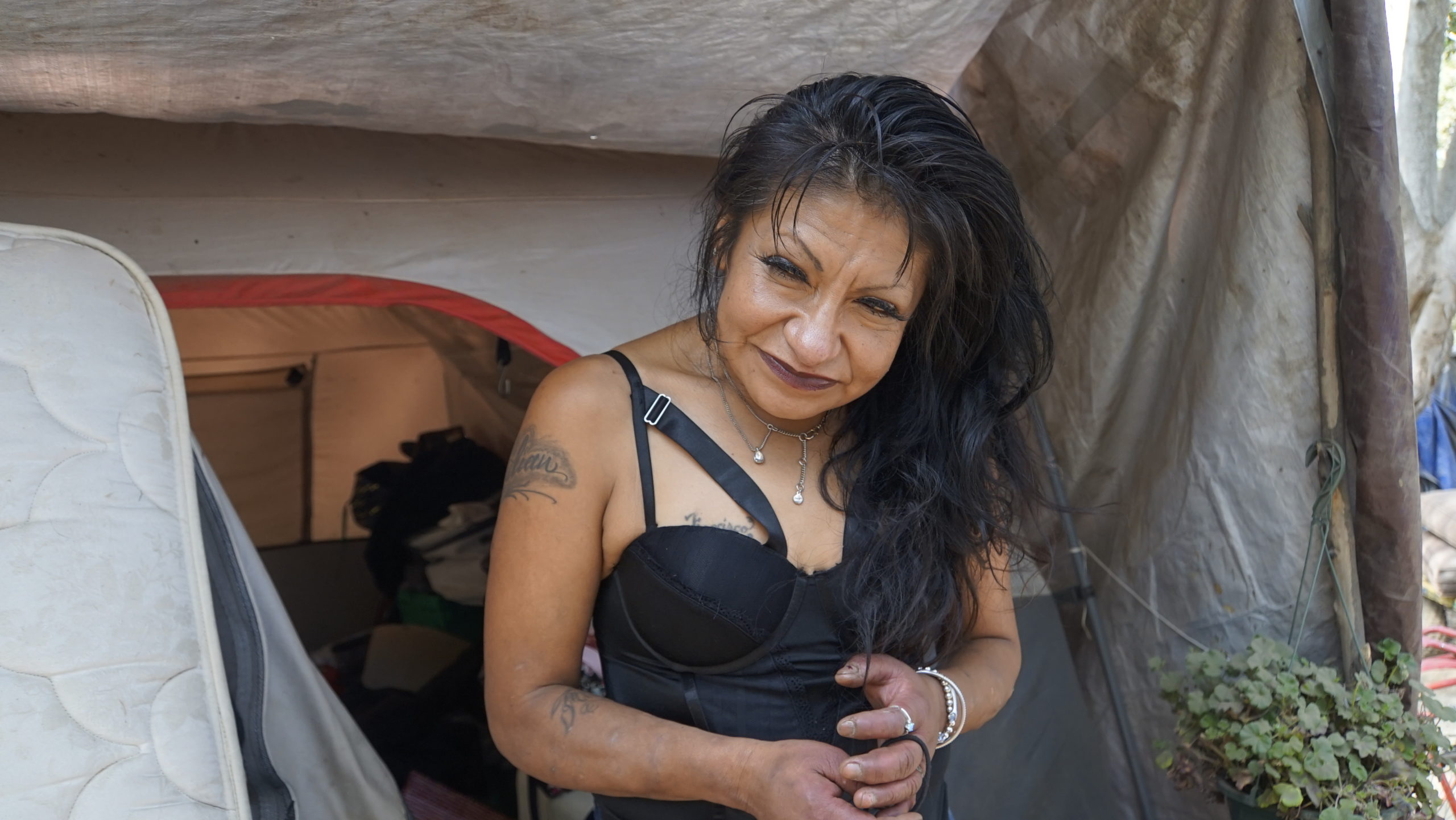 Julisa Diaz’s dream is to return to a stable apartment with her children.

Diaz, 48, has lived in Santa Cruz County her whole life. Until about three years ago, she worked as a house cleaner and lived in a Soquel condo with her two youngest children. Her landlord ended the lease so he could move into the condo. She could not find another landlord to accept her housing voucher, she said.

“Nobody wanted to accept Section 8. And that’s how I lost it,” Diaz said. “I had good references and everything, but they always denied me.”

Diaz and her children became homeless. They lived in her car for a while, until Child Protective Services took the children and placed them into housing in San Jose. Diaz began living in tent camps around Santa Cruz.

Diaz now lives at “Camp Paradise,” a Santa Cruz homeless camp on the San Lorenzo River next to the Santa Cruz Memorial cemetery.

Diaz struggles with drug addiction. She dreams of getting clean, but it’s hard to find the will, she said.

“It’s just me being willing to stop and to go to the [rehab] program. It’s willingness. But right now it’s hard. With no money or nothing, it’s hard,” Diaz said. “When you get clean, you do a lot more things in your life. Like right now, I’m not even doing nothing. I’m just staying here. I just sit at home depressed. It’s not good,” Diaz said.

When asked what she needed, Diaz said housing and bathrooms. There aren’t enough portable toilets nearby, she said.

She added that she and others at the camp need drinking water. She said she used to drink irrigation water at the cemetery at night, but that water has been shut off. Regular showers and tents are also big needs, she said.

“I’m not ashamed of my story or nothing. This has been the truth. I’ve been here and I’m homeless and it’s hard,” Diaz said. 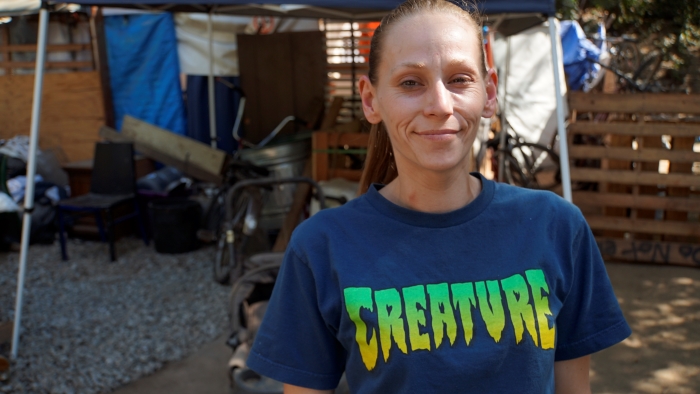 Brittany Shay wants to get back into sales. She last worked as a supervising sales manager at a cellphone store in the Capitola Mall.

“Sales, that’s money. I like commission,” Shay said in September. “That was fun too. Just to be able to get any job, honestly.” Shay said.

Shay lives at “Camp Paradise,” a Santa Cruz homeless camp on the San Lorenzo River next to the Santa Cruz Memorial cemetery. She is one of dozens of homeless people Santa Cruz Local has interviewed in recent weeks as part of a community engagement phase of the project. The project investigates solutions to homelessness in Santa Cruz County.

Shay said she became homeless in Santa Cruz two years ago after her boyfriend had a mental health problem. “We lost our place. So I mean, I couldn’t afford housing anymore. I tried to go to the shelter, but they said they didn’t have a bed for me, that I wasn’t ‘priority,’” Shay said.

Shay said what would help her the most is a connection to a job and rent help. She said the state system stopped her unemployment payments in October 2020 and she needs help accessing those benefits.

When asked what she needed, she said she and others at the camp need survival gear as winter approaches. They need clean water, jackets and other warm clothes, bedding, food, feminine pads and tampons, socks, access to laundry machines and pet resources.

“It’s definitely politics. No one’s really in our corner,” Shay said. “The No. 1 thing is we don’t have a voice, somebody to speak for us. Somebody who’s knowledgeable about what we go through day to day.” 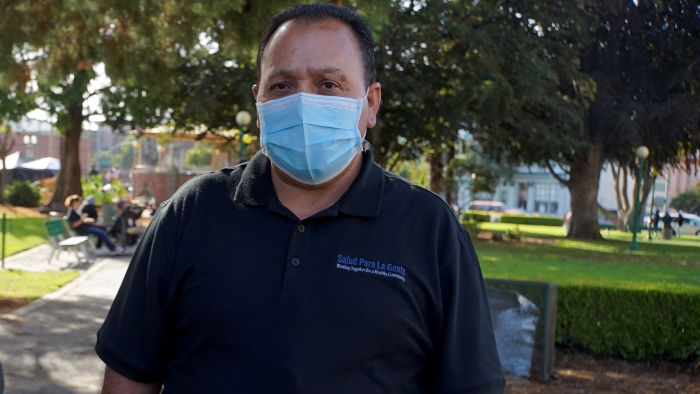 Infante Garcia described himself as hard working and mentally strong. “I want people to see that even with all of that, I live and work just to eat. I cannot imagine a house or a good future, not right now. I just work to survive,” Infante Garcia said in an interview Friday at the Watsonville Farmers Market. He spoke in Spanish.

Infante Garcia and his wife live in their car. Infante Garcia is one of more than a dozen homeless people Santa Cruz Local has interviewed in recent weeks, as part of an investigation into solutions to homelessness in Santa Cruz County.

Infante Garcia has been homeless for almost three years. When he rented an apartment, his debt grew. “I had to make a decision: either eat or rent,” Infante Garcia said.

He said his wife receives disability payments. They earn too much to qualify for housing assistance, he said. They cannot afford an apartment due to move-in costs that include first and last month’s rent plus a security deposit. He wants a service that would cover his move-in costs, he said. 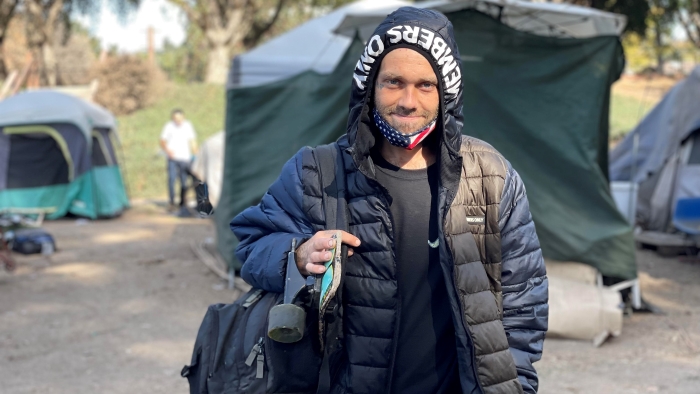 Santa Cruz resident Matthew Hendrix’s immediate goal is to find housing. It could be a room or a shared room, he said in September. “All I really need is that stability,” Hendrix said. “Stability, a job, and then progress from there.”

Until this summer he worked two jobs: at a Burger King in Santa Cruz and the Fairfield Inn and Suites in Capitola. Before that, he said he worked in construction and retail.

Hendrix, 32, has lived in Santa Cruz County his whole life. He said he has been homeless since he was 16, except for a four-year break when he had a two-bedroom apartment in Aptos with his wife and two sons.

The rent was $2,700. He had rental assistance of about $1,700 a month. When that help ended this summer, he and his family became homeless. His wife, who is pregnant with their third son, moved into a shelter in Watsonville, he said. His sons now live with their grandparents. Hendrix moved to the Benchlands homeless camp by the county government building in Santa Cruz. He stopped working because he got depressed, he said, partly due to family issues in court.

“I really couldn’t think past what was going on in my head, let alone to get up and just go throughout my day, especially after losing the place” to live, Hendrix said. “You don’t have anywhere to wash your clothes. You just feel awkward and dirty. But if I still had my place, it’d be a totally different story.”

Hendrix said rent help was the key for him to stay housed. He wants local leaders to provide more rent help. He said he only qualified for long-term rent assistance because of his children.

“What about people who don’t have kids, or their kids are all grown up and gone? What are they supposed to do? How are they gonna get help and funding?” Hendrix asked.