SANTA CRUZ >> Bonny Doon resident Andrew Davidson said he felt relief when he and his family were given a room at the Seventh Day Adventist Campgrounds evacuation shelter in Soquel, after several days on the wait list.

“I feel a lot more at ease,” Davidson said Thursday, standing in the doorway of his family’s room, his first day at the shelter. Davidson believes his home will survive. But he said he has a better understanding of the anxiety people experiencing homeless face.

“Just the amount of time you lose, trying to figure out ‘Where am I gonna sleep tonight? Where am I gonna eat? OK, I gotta get some clothes washed. What am I going to do?’ I don’t know how you get your life back on track when you’re dealing with all this stuff,” he said.

Davidson is one of thousands of Santa Cruz County evacuees who fled their homes on the North Coast and San Lorenzo Valley since Aug. 16, the night a lightning storm ignited a series of wildfires known as the CZU Lightning Complex Fire.

Davidson, his family and his dogs fled before dawn the night of the storm. “Everyone just basically grabs their socks and runs for their car and heads down there to Bonny Doon Beach, which is a safe place,” he said. “The ash is just falling from the sky, and the lightning — I’ve never seen lightning look that way before — going horizontally and sometimes to the ground. But the top of it was a big explosion, like a firework.”

A few hours later, he and his family returned home. They packed camping equipment, clothes and a few keepsakes before a second evacuation a few days later.

“The first two days, it was nobody up there except for my neighbors fighting a fire on their own,” he said. “The state was spread thin, and people are like, ‘damnit, I’m gonna go up there. I know what I’m doing.’” Davidson serves as the board chairman for the Rural Bonny Doon Association, an organization that aims to protect the natural character of the rural community. He thinks residents should have easier access to volunteer fire department training so that they can aid efforts.

“The really, really scary night was Tuesday night [Aug. 18],” he said. That was when they got the final evacuation order. He and his family slept that night in a field at Fambrini’s Farm south of Davenport among falling ash and burnt debris. They moved around for the next few days.

“Pretty much every night’s been scrambling to find a place,” Davidson said. “When these things have happened in the past, we have family in the county. But they’re all evacuated too.”

Adapting to shelter, need for internet

The Seventh Day Adventist Campgrounds is one of the few county-run shelters with space for animals. It reached capacity almost immediately after it opened.

Thursday, hundreds of people filled lines of parked RVs and rows of cabins. Unable to return home or to work, many sat outside or wandered around the grounds with pets and children.

Many residents left their homes in a rush, expecting to return in a matter of days.

“I evacuated that night not really expecting it to be as bad as it was, since I’ve been through a couple fires before,” said Anthony Cole of Boulder Creek. “I took very little with me, and now I have almost nothing.”

Cole had been staying at the campgrounds for a week. He sat outside his room in a folding chair. “It’s been very nice here. The shelter is very accommodating,” he said.

The shelters offer food, clothes, sleeping arrangements, mental health and medical services, but many evacuees worry about irreplaceable items left behind in the rush.

“I forgot all my important documents,” said Marta Hamre, an analyst for U.S. Bank from Boulder Creek. “Living in California, we all know we’re supposed to have a bug-out bag and be ready to go, but when it’s time to do that, you’re still kind of running around like a chicken with your head cut off,” she said.

When Hamre left home, she grabbed her dirty clothes, a pillow, a blanket and a few basic necessities. “I thought we were going to be going back really soon,” she said.  Hamre’s home was not in the direct path of the flames, but she said she knows several people whose houses were destroyed.

Thursday, she and her family had been at the Seventh Day Adventist Camp Ground for more than a week. Her group of four adults, eight children, seven dogs and eight cats all lived in the cabins.

“We have a menagerie — it’s like Noah’s Ark,” she chuckled and rolled her eyes as her dog sat up and barked at a passerby. “Getting us all here and moving us around was a bit of an ordeal.”

The shelter doesn’t have Wi-Fi, so Hamre works remotely from a friend’s house. Many others at the campground can’t work at all. “I know a lot of people are very restless and kind of feel helpless because they can’t do anything,” she said.

“The community has come together in amazing ways,” she said. Heffner stayed in a hotel for the first few nights before moving to an RV at the campground.

For almost two weeks, hundreds of evacuees have lived in tents and RVs at the Santa Cruz County Fairgrounds in Watsonville. Friday, piles of clothes and shoes were stacked on long folding tables in one fairground building. In another, evacuees got snacks and meals. Tents filled grassy spaces, RVs lined parking lots, and livestock grazed in nearby fields.

Some evacuees continue with demanding work schedules while staying at shelters. Keith Dockins, a union sheet metal worker from Ben Lomond, leaves the Santa Cruz County Fairgrounds at 4 a.m. each weekday to work in Monterey. “I wake up here, and they have coffee ready for me,” he said.

Dockins and his fiancee, Mirani Gomez, were staying in tents with their two kids, a dog and a cat. They brought camping gear but grabbed sleeping cots from the shelter when they realized they would be there longer than expected. They believe their home will survive but don’t know when they will be allowed to return.

Gomez said that at first it was difficult to find accurate information about the fires. “Then Cal Fire started coming around and putting up these posters,” she said. “It really gives us all the critical information without any of the hearsay and speculation. I think this is really the best we can make of this situation.”

Dockins agreed. “I think every resource here is available,” he said. When they evacuated, he grabbed his fishing poles and his tools. “I can get more clothes no problem,” he said, pointing at a T-shirt he picked from a donation pile. “But it’s hard to replace my tools.”

Sunday, the county listed 11 official shelters, two of which are wheelchair accessible. Tuesday, county leaders plan to close some of the sites due to low attendance. The sites that will remain open are Harbor High School in Santa Cruz, the Seventh Day Adventist Campgrounds in Soquel, the Santa Cruz County Fairgrounds in Watsonville, the Cabrillo College in Aptos and the Simpkins Family Swim Center in Live Oak, a county spokesman said Sunday.

People can access resources, such as hotel vouchers, at the shelters. Evacuees and affected businesses can also apply for federal assistance such as temporary and permanent housing, disaster unemployment assistance at DisasterAssistance.gov.

Local, state and federal resources are available at Recovery Resource Center at the Kaiser Permanente Arena at 140 Front St., Santa Cruz. The center is open 11 a.m. to 7 p.m. daily.

Terry Record, a retired furniture maker, lost his Bonny Doon home. Saturday, he was at the Kaiser Permanente Arena, where he met with a Federal Emergency Management Agency representative.

“What I’ve experienced so far is that there’s confusion inside the confusion,” he said in a parking lot near the arena. “We’ve got a whole bunch of agencies, and they may be stepping on each other’s feet,” he said. “They’re doing the best they can, but the coordination is beyond my conception.”

Record slept in his car the night of the evacuation and has since stayed with a friend. Like many evacuees, he’s taking things day by day. “I haven’t been able to think farther ahead than maybe a week,” he said.

Processing the situation and learning what resources to ask for has taken up most of his time.

“I’m still 10 days into this brand new learning process,” he said. “If it were flying, I wouldn’t be at the controls yet.”

Jennifer Catron, an American Red Cross caseworker from Virginia, was parked Saturday in an emergency response vehicle outside the Santa Cruz Civic Auditorium. She handed out masks to help prevent the spread of COVID-19 as well as blankets, food and water.

Crisis response teams must stay physically distant. “We’re used to giving lots of hugs,” she said. “COVID has complicated everything.”

Catron said some evacuees taught the Red Cross workers how they prepared.

“We actually let them — the residents — lead the group and tell us all their tips and tricks and all the things that had made it easier for them for evacuating,” said Catron. “How they prepared their homes… their go-bags under the bed, taking videos of everything in their house… taking pictures of their credit cards back and front, their licenses, all that stuff — and putting it on a flashdrive in the go-bag.”

Catron said she was surprised how well prepared most evacuees were.

“At the campground we were at yesterday, we spoke to 63 trailers, and not one person had any unmet needs, which is a first for us,” she said. 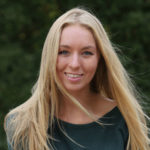 Erin Malsbury recently graduated from the UC Santa Cruz with a master's degree in science communication. Her work has appeared in the Mercury News, the Monterey Herald, Science and Smithsonian Voices, among others.