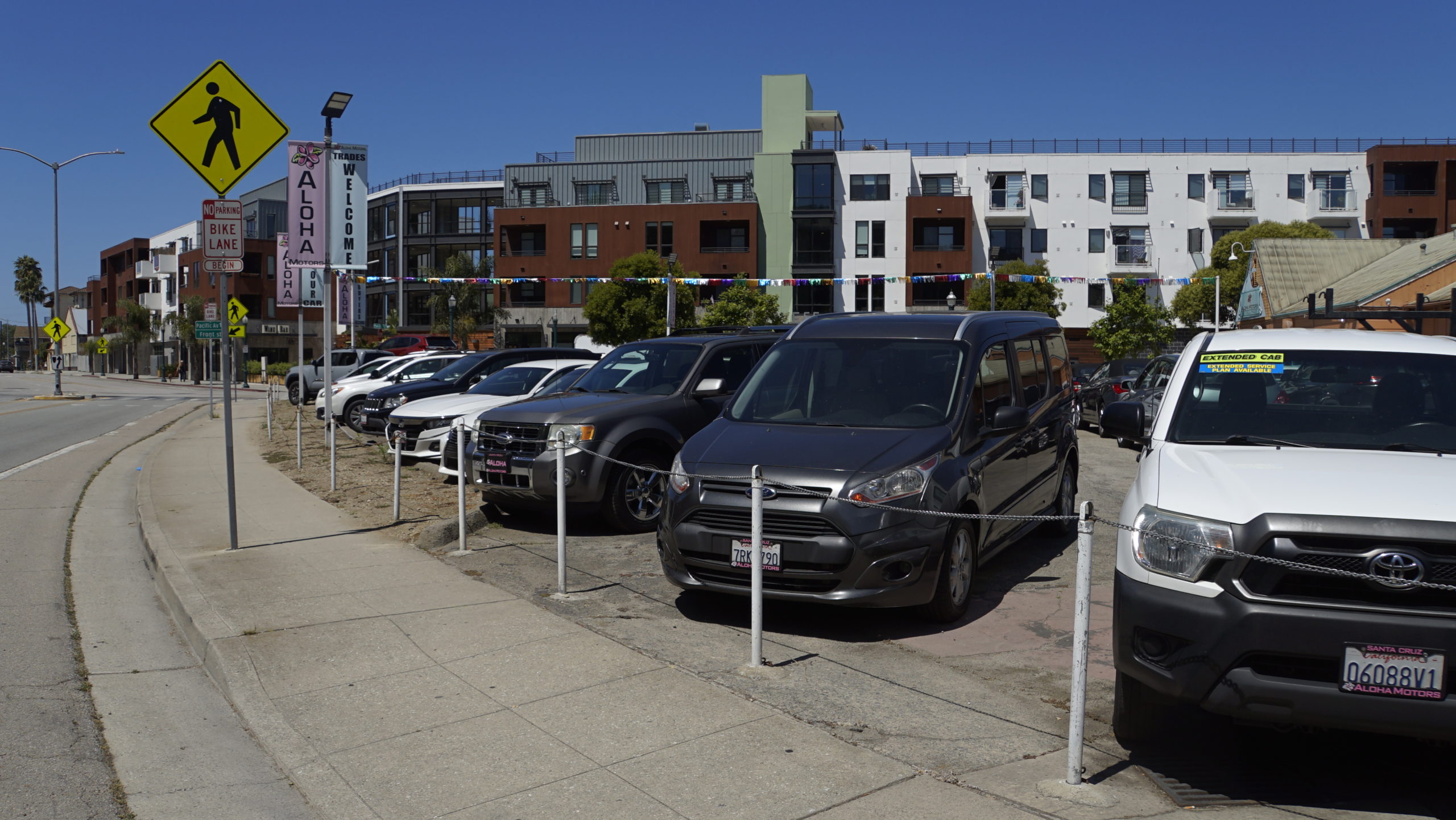 A city plan was advanced Tuesday that aims to increase housing potential and better connect downtown to the beach and riverfront. This city block between Pacific Avenue and Front and Spruce streets could be home to a new Santa Cruz Warriors arena with housing and shops. (Kara Meyberg Guzman — Santa Cruz Local)

SANTA CRUZ >> The Santa Cruz City Council on Tuesday night advanced a plan that aims to better connect Downtown Santa Cruz with the beach and riverfront, allow for more housing and create a permanent arena for the Santa Cruz Warriors basketball team.

The plan, an update to the Downtown Plan, extends the downtown zoning area south of Laurel Street to Front Street.

According to a staff report, expanding the downtown area would:

The future home of the Warriors remains undetermined. The new stadium could be built on the existing lot, but another location being considered is on the south side of Spruce Street between Pacific Avenue and Front Street, according to a city staff report. 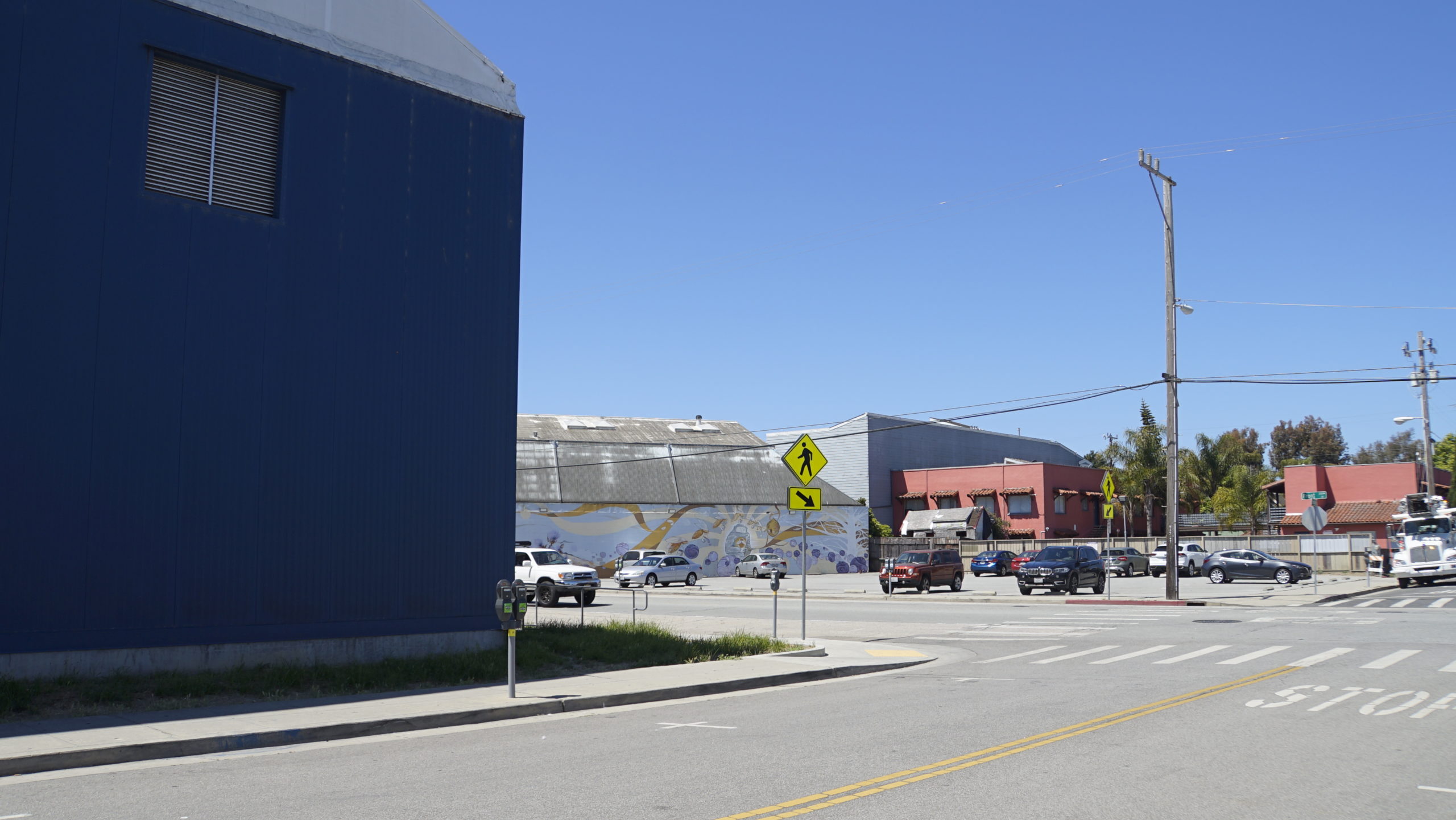 A new Santa Cruz Warriors arena could be built one block west of the current arena, south of Spruce Street and between Front Street and Pacific Avenue. Warriors leaders are developing partnerships with property owners on the four blocks surrounding this intersection for a possible housing and commercial project, Santa Cruz Planning Director Lee Butler said at Tuesday’s council meeting. The organization is exploring a potential mixed-use arena project that could include affordable housing, office space, restaurants and shops.(Kara Meyberg Guzman — Santa Cruz Local)

Senior Planner Sarah Neuse said increasing the density of homes downtown would enable the city to meet not only the housing goals set for the next seven years, but for decades in the future.

“Any number of units we put in this part of town we don’t need to find a place for elsewhere,” Neuse said. 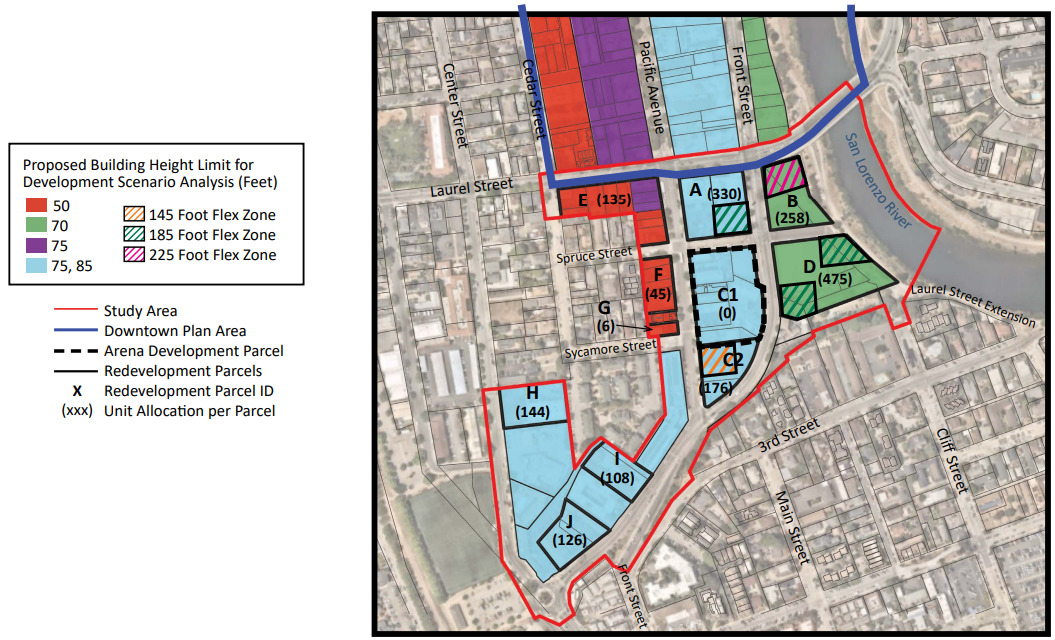 A map shows striped areas along Front Street where city staff recommended increased building heights of 145 to 225 feet. The council instead advanced a plan that called for a maximum building height of 150 feet, with one taller building at 175 feet. (City of Santa Cruz)

The staff-recommended plan included a maximum building height of 50-85 feet, with up to five buildings from 145-225 feet permitted in limited areas. In May, the Santa Cruz Planning Commission recommended that heights for all buildings be capped at about 90 feet. Ninety feet is the same height as the seven-story Palomar Hotel.

“Large blocks of buildings all at the same 90-foot height would look and feel monotonous and oppressive,” city staff wrote in a report. “Taller building elements, which will create a distinctive skyline, would actually feel lighter and allow the base portions of all buildings in the project area to be in scale with their environment.”

Santa Cruz Warriors President Chris Murphy urged the council to support the plan and clear the path towards a permanent home for the team. He said a new stadium would house not only the Warriors, but also serve as a venue for the Santa Cruz Symphony and host other regional events.

At Tuesday night’s council meeting, the plan received some support from others that included:

“We need housing desperately,” said Zachary Davis, who owns several restaurants in Santa Cruz. “This is a perfect place for housing to go.”

But several residents in neighborhoods adjacent to downtown said the planned development would block out views and dwarf nearby homes.

Beach Hill resident Philip Rosenblum called the plan a “zoning bomb” and said outreach to residents in neighborhing communities had been insufficient. 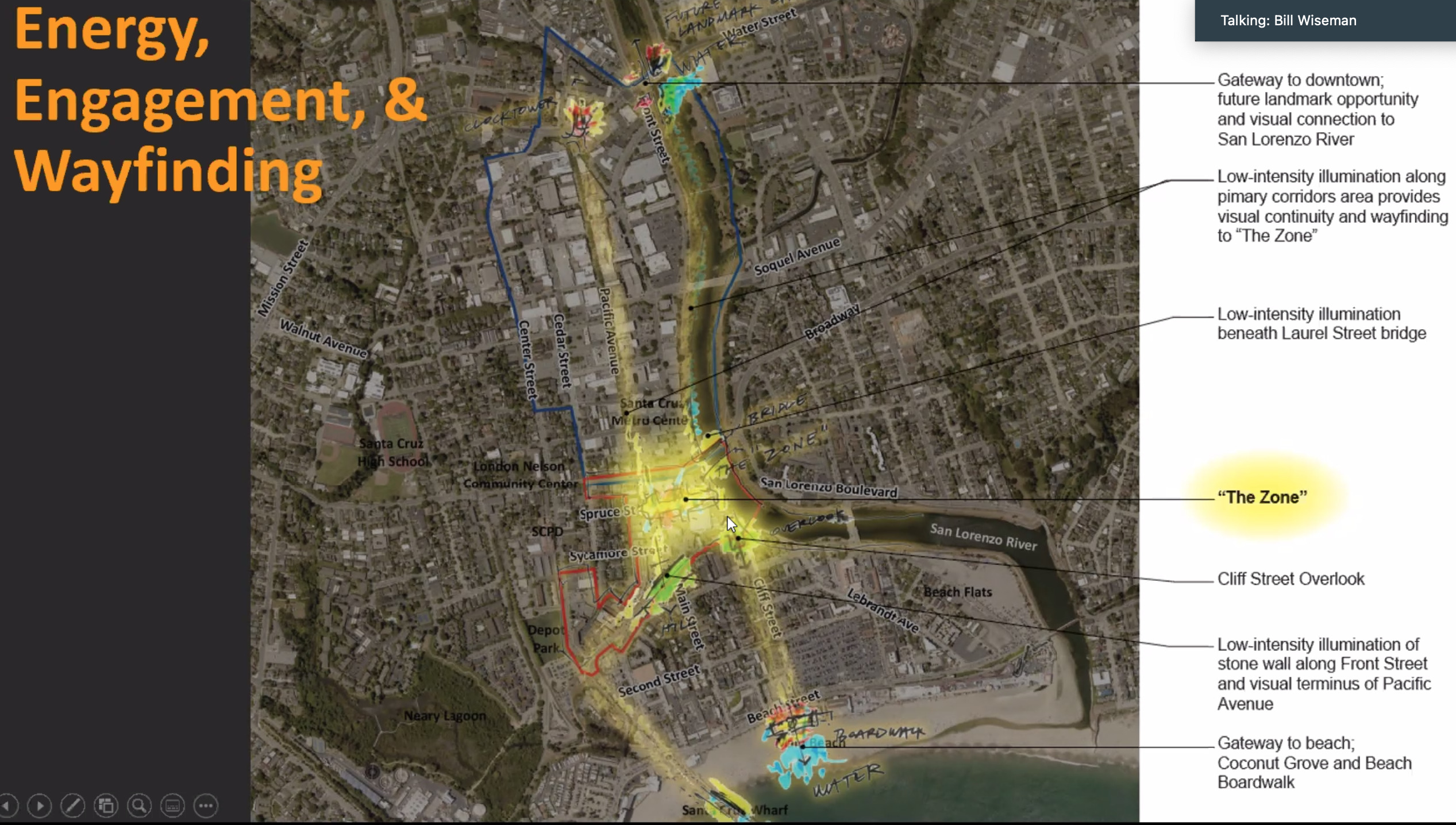 A map shows streets with expanded walk and bike access that would connect a planned expansion of Downtown Santa Cruz with the beach and San Lorenzo River. (Kimley-Horn)

“These buildings will be here long after we’ve kicked the bucket,” Golder said. “We’re going to be gone and the city will be different, just as it was different before we were here.”

Councilmember Donna Meyers supported the proposal, but expressed concerns on the development’s environmental effects on birds and other wildlife. Meyers proposed a motion that decreased the plan’s maximum building height to 150 feet — with one taller building at a maximum of 175 feet, based on community feedback. It was called the “medium-intensity development scenario.”

Councilmember Justin Cummings proposed an amended motion, which would have required 25% of new housing units to be priced for households with moderate, low or very low incomes, compared to area median income. The city currently requires 20% of new units to be offered at affordable rents or prices to people with incomes below thresholds set by the state. Cummings’ proposal also would have created a committee to study ways to minimize negative impacts to residents in Beach Street and Lower Ocean redevelopment. The amended measure failed 2-4. Brown and Cummings voted in favor of it.

Mayor Sonja Brunner recused herself from the item due to her position as the director of operations for the Downtown Association of Santa Cruz.

The council advanced Meyers’ proposal with a 4-2 vote. Brown and Cummings were opposed. “I do support the Warriors. But without a commitment to affordable housing, I can’t move forward with supporting this,” Cummings said.

City staff and consultants will now begin work on the Environmental Impact Report to detail the environmental effects of the preferred plan and several alternatives.

City leaders plan to continue to collect community input during the process. After the impact report is completed, amendments to the Downtown Plan and other zoning laws are expected to be brought back to city council in spring or summer of 2023.